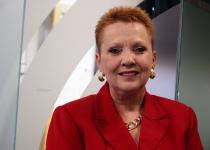 As Arizona heads toward the August primary election, KJZZ's The Show is inviting candidates in contested races to talk about why they’re running and some of the key issues in their contests.

Sandra Dowling is running for Congress in the 8th Congressional District, where she’s facing off in the primary against longtime state legislator Debbie Lesko.

Dowling is not new to Arizona politics. For almost 20 years, she served as the Maricopa County schools superintendent where she became one of former Sheriff Joe Arpaio’s targets in 2006.

His deputies raided her home in the middle of the night, and she was charged with 25 felonies over alleged corruption. But, those charges were eventually dropped because of conflicts with Arpaio’s office, and she plead guilty to one nepotism charge — a misdemeanor.

The Show talked with Dowling about the controversy in her past and why she wanted to run for office now.