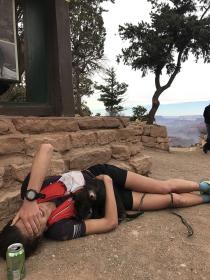 Trail running is booming at the Grand Canyon, with hundreds of runners tackling the steep trails on the busiest days.

One of the most extreme canyon challenges is called a rim-to-rim-to-rim, which usually means running down the South Rim, through the canyon, up the North Rim — then all the way back again. A trek of more than 40 miles.

In the fall of 2017, Bradley busted the women’s rim-to-rim-to-rim fastest known time, at 7 hours and 52 minutes. As KJZZ’s Stina Sieg worked on a recent series about the Grand Canyon, she got the opportunity to talk to Bradley.

RELATED: Below The Rim: Life Inside The Grand Canyon

"And I was fascinated by her, because for me, hiking up or down the Grand Canyon just one way is an all-day thing,” Sieg said. "But Bradley was adamant that a rim-to-rim-to-rim is simpler than you think. She’s a trained athlete, but she said on her record breaking run, she decided to just 'wing it.'”

Listen to the audio above to hear Sieg's conversation with Bradley on The Show.

Bradley was supposed to compete in the Western States 100-Mile Endurance Run on Saturday — she won it last year, but she had to pull out this time because of an injury. So it’s likely the next time we hear from her will be when and if she decides to challenge her record in the canyon.