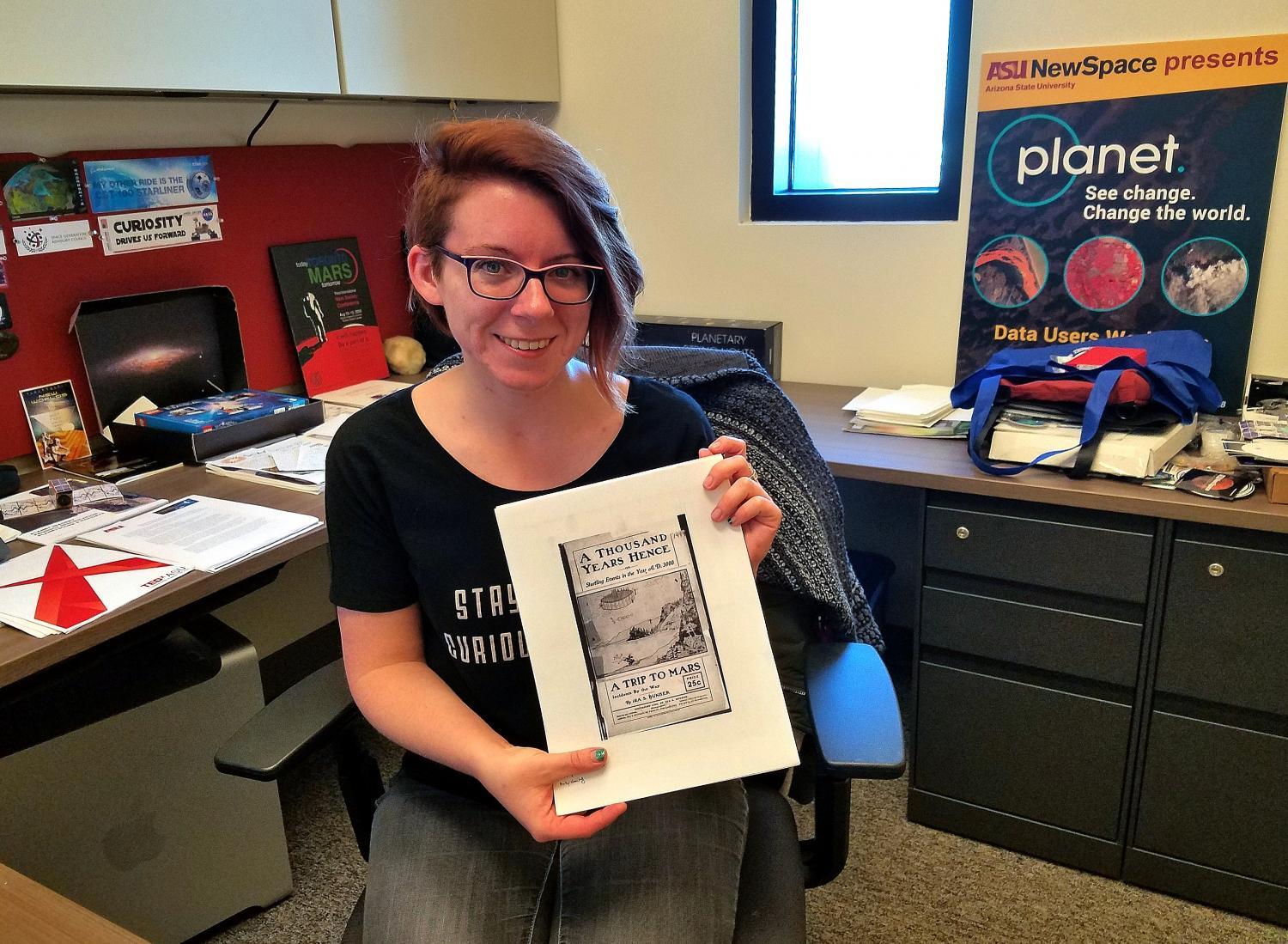 You can refer to Tanya Harrison as “Dr. Harrison,” but there’s another title she likes, too.

“I’m what I like to call a professional Martian,” she said.

She’s a geologist who explores Mars through the eyes of NASA’s Opportunity rover, which recently celebrated its 5,000th Martian day out there on the planet’s dusty surface. Harrison is also director of research for the NewSpace Initiative at ASU.

“I get to spend a lot of my time looking at images from Mars, which I think is really exciting, especially if you’re doing something with the rovers were you might be one of the first people in history to ever see that piece of Mars from the rover,” she said.

“I’d always been interested in space. I grew up watching a lot of Star Trek with my parents. But in 1997 when the Mars Pathfinder mission landed, NASA released a little animation of photos of the Sojourner rover driving off the lander onto the surface of Mars,” Harrison recalled. “And I remember seeing that and thinking, we’re driving a robot on another planet tens of millions of miles away. And my brain just couldn’t comprehend how awesome that was. And so that kind of shifted my focus from just kind of general space to — I really want to work on Mars.”

So she did. Not literally, but as close as anyone can get right now. Every image she sees from the rover unravels another little mystery about the red planet.

Then last year, her mom made a discovery.

“So my mother is really into genealogy,” Harrison said. “And she told me at one point recently that she had come across my great great uncle, whose name is Ira Sweet Bunker. And she found out from his obituary, of all things, that he had written a story called: ‘A Thousand Years Hence; Or, Startling Events In The Year 3000.’”

Subtitle: “A Trip To Mars, Incidents By The Way.” 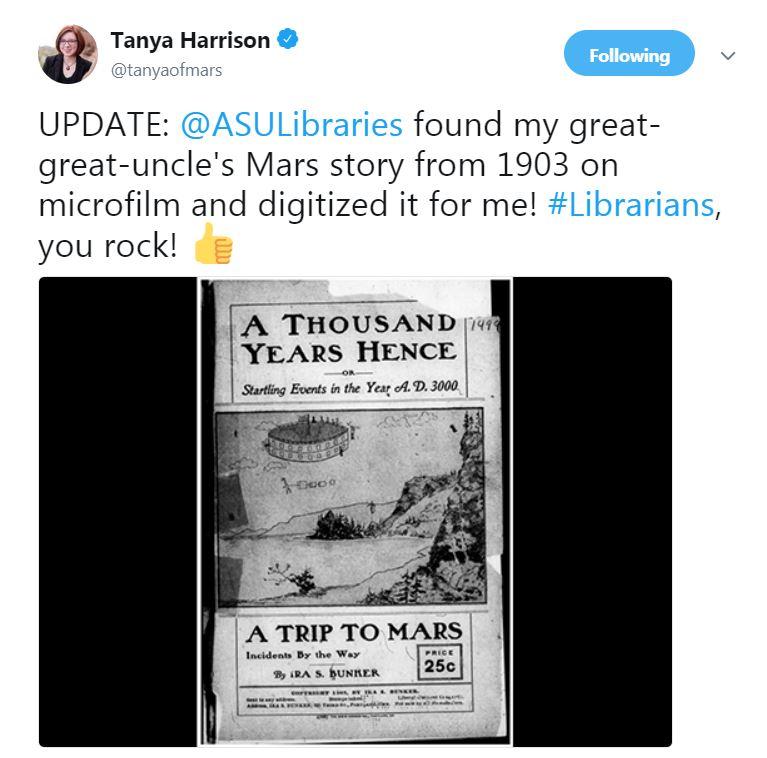 Tanya Harrison via Twitter
The short story was under Tanya's nose the whole time at ASU.

Turns out, an interest in Mars runs in the family. But this story was published in 1903, and had since been lost. It didn’t seem to be anywhere online, except for references to it.

“I turned to Twitter and just happened to mention I thought this was a cool discovery that someone in my family had written a story about Mars, and a hundred years later I was working on the Mars rovers,” Harrison said.

The Twitterverse delivered. And she found out that her great great uncle’s story had been under her nose this whole time — in the ASU microfilm collection.

“A librarian at the ASU libraries went, pulled it out of the microfilm, digitized it for me and sent it to me without me even asking for them to do that,” Harrison said. “And so it just showed up in my email one day, which was pretty cool.”

That’s when she saw Mars through the mind’s eye of Ira Sweet Bunker. The story begins with this line:

"You may think the date a strange one, yet it is only one year in the center of two eternities — the past and future."

“And there’s a lot of things in there that are pretty… forward thinking, shall we say?” Harrison laughed.

"Thousands of men and women of all ages were sailing through the air..."

Everyone wears anti-gravity jackets in the year 3000; and at one point, the president of the United States shoots a black bear with a sort of laser gun, like some futuristic Teddy Roosevelt.

"A blue spark was emitted from the instrument..."

“And then they eventually get to Mars and he ends up meeting the Martians, and they live in this utopian society where everyone is happy and everyone is equal,” Harrison said.

"We slowly drew near the most beautiful landscape I ever beheld — covered with large evergreen trees, which were entertwined [sic] with vines..."

Bunker had no idea what the real planet looks like. But, to be fair, no one did.

“This is what we thought of Mars looking at it through a telescope,” Harrison explained. “You can see dark areas and light areas, and for a while some people thought the dark areas were maybe vegetation and the lighter areas were the deserts. And so, this was sort of a common theme in a lot of the stories of the time.

“There are no evergreen trees on Mars,” Harrison said. “There’s no beautiful society there full of gorgeous Martian women - which he also talks a little bit about in the story.”

Would Bunker be disappointed? Maybe. But Harrison would also want him to know that the real Mars isn’t some boring rock.

“There are landslides going on, we’ve seen avalanches, it has weather,” she said. “The pieces of the puzzle are still coming in. We don’t have the complete picture yet, and so I want to be around long enough to figure out what that picture is.”

In the meantime, she’s honoring her great great uncle by sending him up to Mars — or at least his name. Certain craters on the planet are named after science fiction authors who wrote about Mars. Harrison applied for one of those to be named the Ira Sweet Bunker crater.

Maybe someday — in the year 3000 — someone who always dreamed of going to space will stand at the edge of of that crater, on the surface of Mars. There is still 982 years to find out.