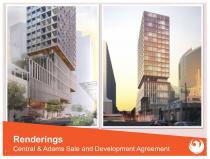 City of Phoenix
(Photo by Christina Estes - KJZZ)
Phoenix bought this parcel in 1983 for redevelopment purposes and operated it as a 30-space surface parking lot.

Last Wednesday, the city council agreed to sell the lot at the southeast corner of Central Avenue and Adams Street for $2.8 million to Berger Holdings, LLC.

Another proposer, M.A. Mortenson Company offered to pay $630,000 more, but Economic Development Director Christine Mackay said the lower sale price will lead to a better deal over the long run.

“They will actually bring $2.8 million more in additional, direct sales tax to the city of Phoenix over a 10-year period of time,” she said.

Berger plans to build a mixed-use high rise with ground floor retail, parking and offices. The majority of the 200,000 square foot project will feature a hotel that Mayor Thelda Williams has said “could be iconic”.

Within six months the developer will enter into agreements with Phoenix with construction to begin within 18 months.