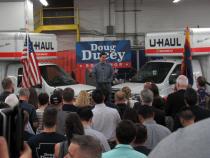 Ducey, who is seeking a second term in office, spoke about border security and education in speech at U-Haul in Tempe.

He touted the Border Strike Force, which he said has made Arizonans safer by improving the connection between local and federal law enforcement.

When thanking those who serve at the border, Ducey specifically mentioned the National Guard, which he deployed in April, when President Donald Trump called for troops to help stop illegal immigration and drug smuggling.

If re-elected, Ducey said he will expand the state’s efforts on border security.

“We’ve put into place smart policies to allow the good guys in, and keep the bad guys out,” he told the crowd. “And that will be our approach moving forward.”

Ducey did not mention the Trump administration’s efforts to thwart illegal immigration by separating families at the border during his speech, and he did not take questions from reporters before leaving the room.

“Over the next four years, I will continue to increase K-12 education spending above and beyond inflation," Ducey said. "And I’ll veto any budget that doesn’t do so.”

Economic growth is the key to realizing the goal, he said.

“And I’m here to tell you, it’s not going to happen by raising taxes and killing our economy,” Ducey said.

Public education advocates are currently working to get a proposal on the November ballot that would help fund schools by raising incomes taxes on the wealthy.