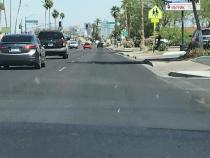 Allegations and insults were tossed around Phoenix City Council chambers Tuesday night during a special meeting to address the south Central light rail extension. An overflow crowd filled the room during the five-hour meeting as emotional comments filled the air.

“This isn’t one issue that’s going to go away,” Richard Hutchinson told council members. “Every time we drive down Central Avenue we’re going to curse your name.”

“We deserve our taxpayer dollars to be invested into our community,” said Gail Knight.

Exchanges between council members also became heated. At one point, Mayor Thelda Williams told Councilman Sal DiCiccio he was "out of order."

In 2014, the council approved a plan to extend the light rail six miles along Central Avenue to Baseline Road. In 2015 voters approved a transportation tax to help fund the extension.

But several months ago, a group of business owners and residents started pushing back. They formed a coalition called ‘4 Lanes or No Train.’ Most want to keep four lanes for cars on Central Avenue. They think the plan, which cuts Central to two lanes for cars, will destroy some locally owned businesses.

“When me and many others lose our jobs who work at small businesses, is Metro or the city of Phoenix going to give us jobs?” Daniel Shipley asked the council.

“They don’t want to hear our voices,” Celia Contreras said.

Several people asked the council for a 90-day pause to come up with a solution. The council is expected to vote during its regular meeting Wednesday.