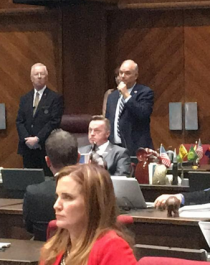 Casey Kuhn/KJZZ
Republican Don Shooter was expelled from the Arizona Legislature on Feb. 2, 2018.

A judge ruled Friday that Republican Don Shooter legally qualifies to run for the state Senate from Yuma. Shooter was ousted from the Arizona House after a sexual harassment investigation.

Shooter was expelled from the House of Representatives in February. He filed to run for state Senate in the same district that covers parts of Yuma to areas west of Phoenix.

He has the necessary signatures to run in Legislative District 13.

A Maricopa County Superior Court Judge rejected arguments that Shooter gave up his residency in Yuma shortly after being expelled from the House of Representatives earlier this year.

According to Capitol Media Services, the judge says Shooter has acknowledged spending most of his time since then at a house in north central Phoenix. The power to his Yuma apartment had been turned off.

The judge says she does not believe Shooter's explanation that someone else — his attorney suggested it might even have been a political foe — had registered him to vote in April in Maricopa County. But even if Shooter did re-register, that is not "conclusive'' evidence of his residency.