Mesquite Elementary in Casa Grande is one of 161 schools that received a D grade from the state of Arizona this year.

“It’s frustrating. It made me sad,” principal Julie Holdsworth said. “But I don’t think that it paints the whole picture of our school.”

Arizona issued public schools final letter grades in April for the first time since 2014. The way the state evaluates schools has been evolving for the last two decades. Some of the state’s lowest-performing schools say it’s still a system that hurts more than helps.

Holdsworth became principal at Mesquite five years after working as a professional development specialist in the district.

She’s proud of her school and its 450 students. Mesquite is a Title I school and 96 percent of kids qualify for a free or reduced-price lunch. There are also families in the district dealing with homelessness.

At the start of every school day, Holdsworth calls a staff meeting in the library.

“We go around the circle and we greet each other,” Holdsworth said. “Staff might share on a test score — or a student had a great day of behavior and we applaud for each other and that helps us to get to know each other.”

Explaining the D grade is a more complicated conversation.

“It’s exhaustive; there’s a lot to look at,” Holdsworth said as she pulled up the school’s evaluation online.

The school’s grade is based on a complex formula.

30 percent - Student test scores on the language arts and math portions of the AzMERIT test.

10 percent - “Acceleration and readiness measures,” based on several factors such as decreasing chronic absenteeism or including more special-education students in regular classrooms.

The rubric for high schools is slightly different in that it includes high school graduation rates and college- and career-readiness.

A D means there is “inadequate performance in proficiency, growth,” according to the Arizona Department of Education.

“I know we were 4.99 points away from a C, but we don’t get a D-plus,” Holdsworth said. She adds that school climate surveys given to parents, students and teachers rank the school highly.

By law, the school has to send a letter to anyone who lives in its attendance boundaries, telling them about the grade. 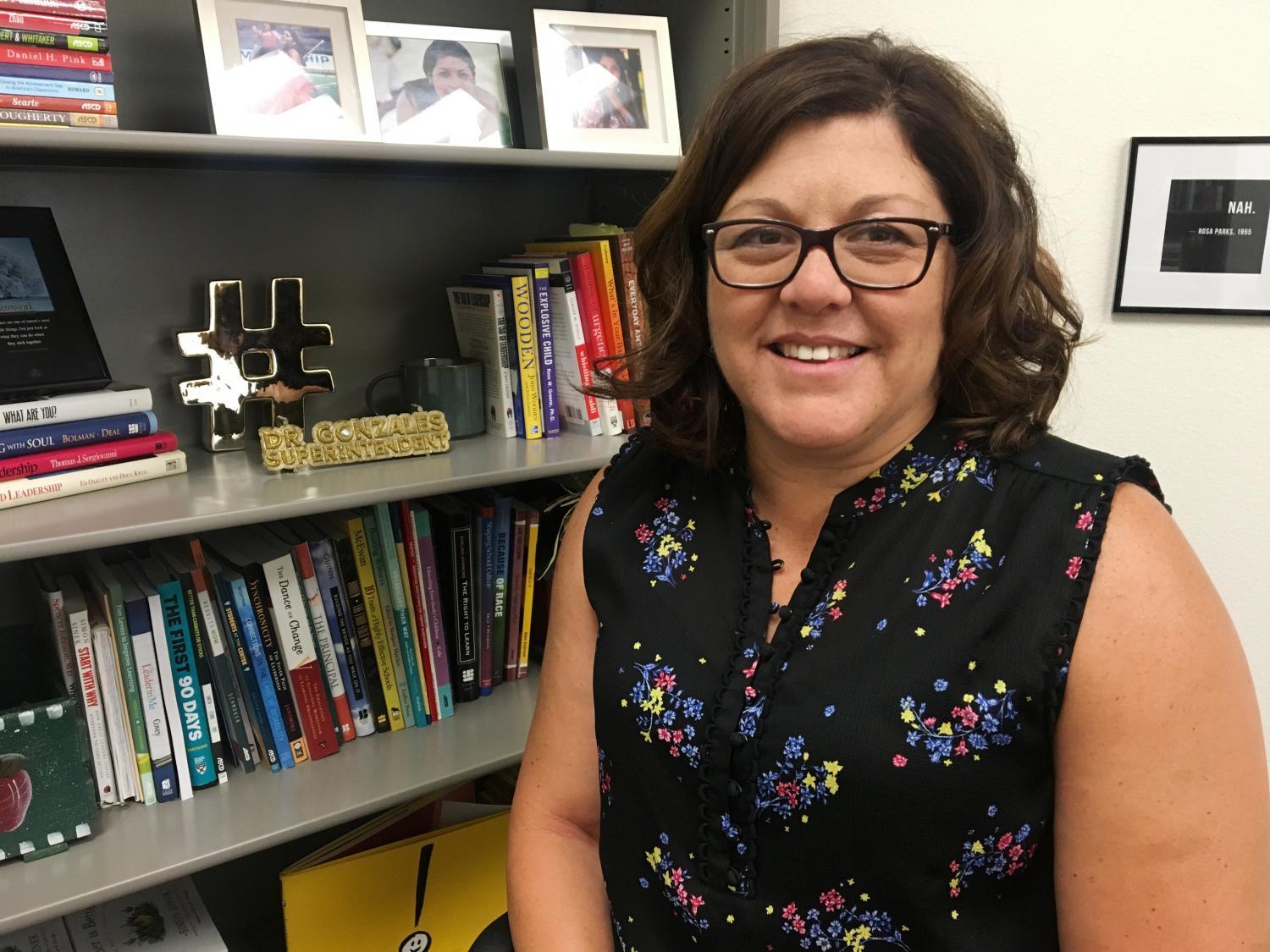 (Photo by Mariana Dale-KJZZ)
Casa Grande Elementary School Superintendent JoEtta Gonzales says Arizona's standards place "a really heavy emphasis on a test that’s given on a single day instead of more authentic...real life ways that students can demonstrate that they're learning."

She is worried the district will lose out on an important source of public money.

“When we’re not adequately funded by the state and we’re reliant on overrides and bond elections in order to just get by, it could be damaging to the vote that comes out.”

Charter schools don’t have to abide by the same rules. If a charter school doesn’t meet expectations, the school only has to tell current students’ families.

One principal of a D school asked why her school faced “the same consequence as a sex offender?”

To find the answer, you have to go back to June 2000. That’s when the Arizona Legislature called a special session to consider a proposal from Gov. Jane Hull and Arizona Superintendent of Public Instruction Lisa Keegan to ask voters to approve a sales-tax increase of 0.6 percentage points that fall.

The plan was estimated at the time to raise $450 million a year for public education.

Baked into the legislation to approve the tax plan was a framework for how the state should evaluate schools and what should happen to schools that aren’t performing.

A Senate Education Committee amendment added the requirement that schools notify residents in their community about the evaluation from the state.

“As I look back on that now, I regret having been part of that,” said then-chairman of the Senate Education Committee John Huppenthal. He was was one of five senators that voted against the final version of the bill.

Arizona’s standards were some of the first in what would be a nationwide wave of education accountability policies. Arizona switched from labels like “excelling” and “under performing” to more recognizable letter grades of A through to F in 2010.

Huppenthal went on to be the state superintendent of public instruction.

“Here we have this letter grading system that comes in and is beating ... the hell out of schools that are serving the most at-risk populations.”
— John Huppenthal, Senate Education Committee

He’s been dismayed that schools in impoverished areas are more likely to fail. (Read about how it’s true in Miami, Texas and Arizona.)

“Here we have this letter grading system that comes in and is beating, to put it bluntly, beating the hell out of schools that are serving the most at-risk populations,” Huppenthal said.

Keegan said that while the system is not perfect, it has succeeded in making more information available to the public about a school’s performance.

“It’s not about being punitive to the school. It’s about being fair to families,” Keegan said. She said the different rules for notification are a “matter of pragmatics.” Schools have set attendance boundaries, and virtually anyone can try to enroll in a charter school.

“They would recommend that the law read to say that all notices just go out to the parents of children that attend the schools, respective of charter or district,” Swiat said. “That way it would be a level playing field.”

Keegan said the school letter grades, while not the only factor parents should consider, reflect a “larger culture” at the school. 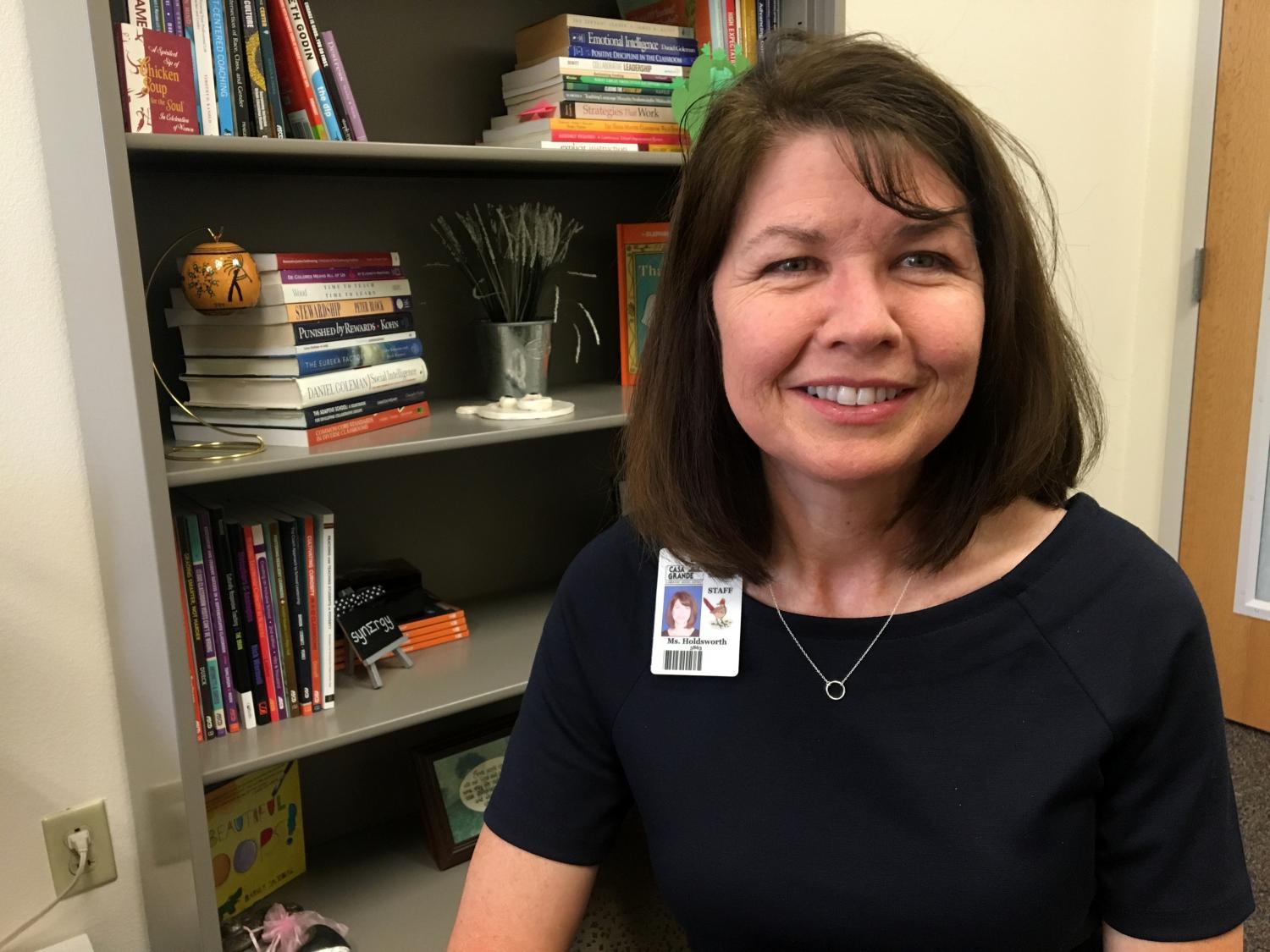 (Photo by Mariana Dale-KJZZ)
"It’s frustrating. It made me sad. But I don’t think that it paints the whole picture of our school,” said Mesquite Elementary Principal Julie Holdsworth after finding out about her school's D letter grade.

“The issue that the state has is to make sure every child has access to a school that will work for them,” Keegan said.

'Am I Going To Let This Letter Define Us?'

The state has several requirements for school’s labeled D or F in addition to the community notification.

Within 90 days, they have to create an “improvement plan” and submit it to the state superintendent of public instruction. Within 30 days after that, the district’s governing board must hold a public meeting to present its improvement plan.

“I’m not a believer in making excuses,” said Julie Holdsworth, the principal at Mesquite Elementary School in Casa Grande.

She is already working on her improvement plan and a summer book club for staff where they’ll talk about how to raise the bar for poor students.

“Am I going to let this letter define us? Or are we going to aim for good instruction and doing what’s right for kids?” Holdsworth asked herself.