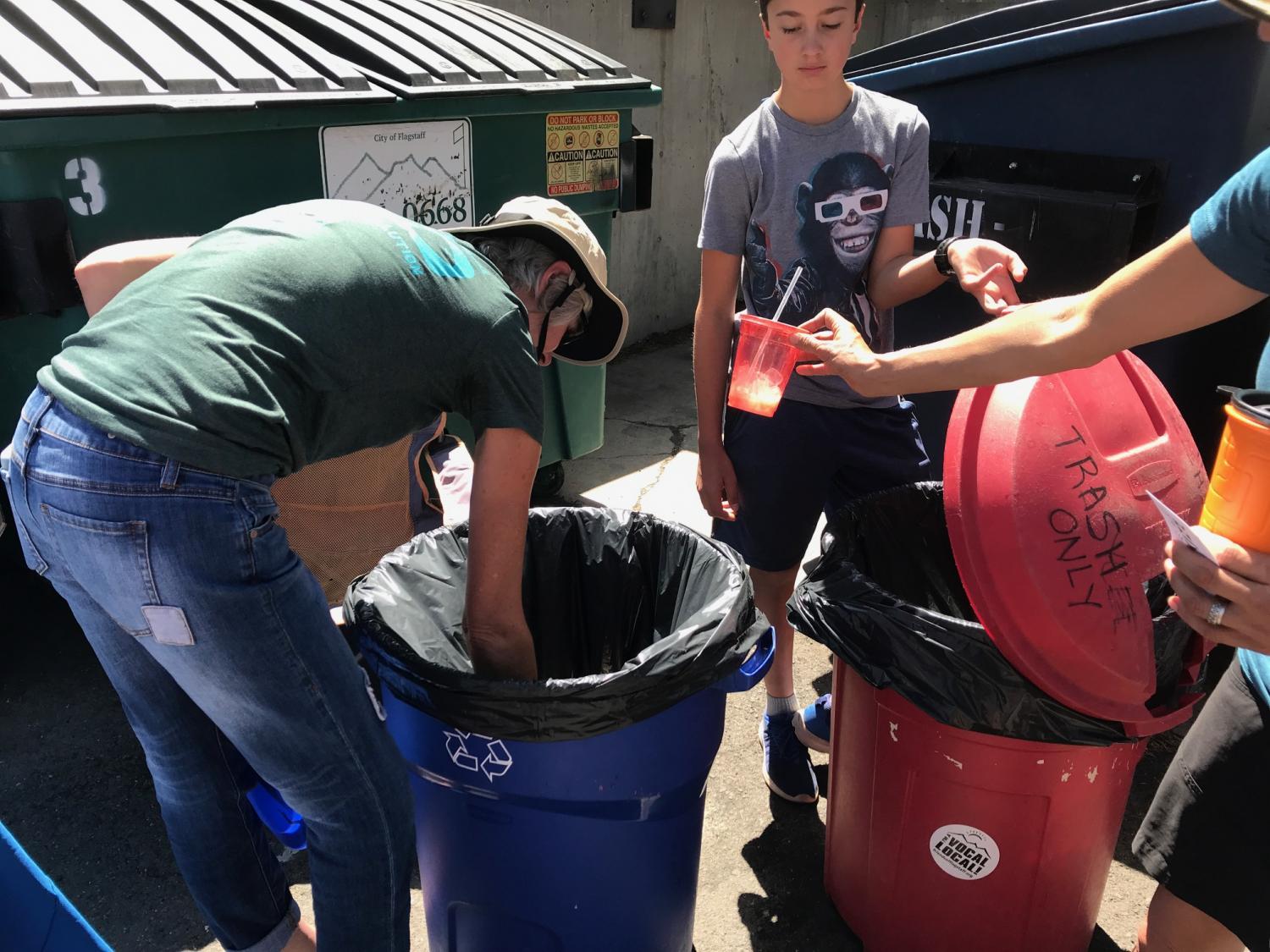 Heather van Blokland/KJZZ
Farmers' market volunteers sort out items from the recycle bin into the trash in Flagstaff, Arizona.

Americans recycle about 66 million tons of material each year, according to the EPA. About one-third of that gets exported to process, and has mostly gone to China. But all that is changing, as China is taking drastic measures to clean up its own environment.

“I think that overall it is probably a good thing.  If our previous policy was reliant on China being willing to trash their environment to take our stuff, and now they are pushing back against it in order to make their place better, then, good,” said Tom Dietrich, a shopper at the local farmer's market.

Across the U.S., recycling gets picked up and sorted at a municipal facility. The finished bales of plastics and paper are then sold to processors. China has processed roughly half of the world’s plastic and paper recyclables for over a decade. But last summer, it announced new standards on how much trash can be in the trash. It’s called contamination rate and it is a measure of how much non-recyclable material can be in paper and plastic bales. The new policy limits that rate to almost zero, at point five (0.5) percent.

“But you can see there’s pieces of plastic. It’s not a perfect system. So you can kind of get a sense of why contamination is a challenge. Oh, see the plastic bags?” said Stacy Hettmansperger, a plant manager in Phoenix.

And while American recycling plants are adjusting to sort and ship a cleaner product, China has added to its list of materials restrictions. China’s original import ban filed with the World Trade Organization last July covered 24 materials. In April, China added 32 more products to the list.

“And what China is saying is we no longer want to be the recipient of all this material, partially because the material isn’t always clean. There’s a substantial amount of contamination, or garbage, mixed in with the recyclables. But also because, we believe, China has a newfound interest in protecting the environment — its own environment,”  said David Biderman, executive director and CEO of Solid Waste Association of North America.

"We definitely have been impacted. And the impact for us has been that our plant’s operators need to be a lot pickier about the quality of the materials that they are making for sale. And in doing so, less material is making it into the sold market than it used to," said Phoenix Assistant Public Works Director Joe Giudice.

Western cities have been hit especially hard as they use ports to process almost exclusively in China. Blaine County, Idaho, cut its paper recycling program in May. Colorado, Nevada and Alaska also have cities shrinking recycling programs, or in some cases, closing down plants altogether because they cannot meet China’s new standard.

"You know, the short-term reactions are hard to accept in the market where we want to recycle. We all want to recycle materials, and it’s hard to hear that plants are having to close down," said Giudice.

For Joe and the Phoenix recycling facilities, the solution is to build processors nearby instead of shipping to China.

“Like, for example, in Snowflake, Arizona, there was a mill that would buy recycled paper and remanufacture paper, but that mill closed down. So the markets in China developed and continued to consume those products and paid the best prices and over the course of twenty or thirty years essentially, that’s how the market developed.” he said.

Giudice is in the process of issuing a request for proposal to get a manufacturer to process recyclables in Phoenix. But that takes time. In the meantime, in Phoenix, Flagstaff and a growing number of U.S. cities, recyclables are going to a landfill.