Arizona Native Makes Novel Debut With 'The Book Of M' 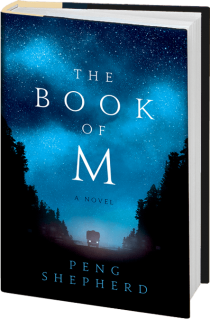 Pengshepherd.com
The Book of M by Peng Shepherd

Imagine losing your shadow. You’re walking down the street, and the shadow just disappears. Then think about losing your memory. What if those two disappearances were tied to each other?

That’s a key part of the story in "The Book of M," the debut novel by Peng Shepherd — who grew up here in the Valley. The book has a post-apocalyptic feel to it, but also features human connection and relationships at its core.

Peng Shepherd oined The Show to talk about the novel.

STEVE GOLDSTEIN: Imagine losing your shadow. You're walking down the street and the shadow just disappears. Then think about losing your memory. Now what if those two disappearances were tied to each other? That's a key part of the story in "The Book of M," the debut novel by Peng Shepherd, who grew up here in the Valley. The book has a post-apocalyptic feel to it but also features human connections and relationships at its core. Peng Shepard is with me to talk about that novel. Peng, there actually is a Zero Shadow Day that's featured in the novel. What is it and how did that lead you to writing "The Book of M?"

PENG SHEPHERD: So Zero Shadow Day, it's a real actual day in India where every year on a certain day, everyone's shadows actually do disappear for just a few minutes. It sounds completely fantastical but it's a real thing, it happens every year, and that really was the spark that helped me because before, I knew that I wanted to write something that had to do with shadows because there are so kind of eerie and mysterious and they appear, you know, in our art, in our stories, in our folktales, just across cultures. So I think humans have been fascinated with shadows for a really long time, but I didn't have a story until I started researching and then when I came across Zero Shadow Day it was just — I mean that was it. The idea sparked and I started writing.

GOLDSTEIN: Obviously a huge part of "The Book of M" has to do with memory and that is related to the shadow. You did a ton of research, I guess, on memory and, okay, we know about elephants, elephants not forgetting. But beyond that, there's so much more to it. At its core, when you first start thinking about memory, what were your thoughts about it?

SHEPHERD: Well it seemed to me like, obviously shadows and memories are very different things, but on some kind of a very deep level, they both feel like, kind of integral and permanent parts of you as a person and if you were missing, you know, one or the other, would you still be yourself? I think the book asks that question a lot, you know, what can you lose and still be you? What would make you not you anymore? So they seemed to fit together really well, even though they're very different things.

GOLDSTEIN: Because our memories can be a little faulty.

GOLDSTEIN: How much does that play into what you're thinking about here?

SHEPHERD: It actually plays into the idea of the magic in the book a lot because, so what happens is, the people in the novel that lose their shadows, they also start losing their memories. But at the same time, they gain this new and, it becomes very dangerous, kind of magic because if you have powers, but you aren't able to remember who you are or what was important to you or what's not important to you, that could really affect what you would do with that power.

GOLDSTEIN: Is this a dystopian novel?

SHEPHERD: I think so. It's been classified as so many things. I've seen post-apocalyptic, I've seen dystopian, I've seen science fiction fantasy. I also saw thriller, which I thought was really interesting. I didn't know I was writing a thriller but I'm very excited to have written a thriller.

GOLDSTEIN: Well let me ask you about the dystopian concept or the post-apocalyptic thing. Why are so many authors drawn to that, in terms of — I mean, is there so much depth to be had? Is it part of that you can use your imagination because we don't know what's out there yet?

SHEPHERD: Yeah, I think the post-apocalyptic and the dystopian genres are really, I don't want to say fun because it's not usually, you know, happy go lucky stories, but they are really fun as a writer to write, because you do get to just wipe the world clean and see where everything goes, and so you're kind of making up your system for civilization rather than working within one that we have, and that can let you do really interesting things and go places that you couldn't necessarily go if you were setting your story in a real time, in a real place. I also think it's just really fascinating to either read or write because, beyond just seeing, you know, what would you do in a situation like that, I think it's really important to think about if you were in that situation would you become less true to yourself or more true to yourself or what would you do to survive? Because we don't often have to think about that in our daily lives. I think that's what I like the most about writing in this genre is that you really have to figure out who you are.

GOLDSTEIN: Was there any appeal to you, because you've been involved in some serious situations in terms of working internationally? When you're in certain circumstances do you need to be able to let that imagination run wild in some other way?

SHEPHERD: Yeah you definitely do. So, before I became a writer, I was working in private security and the company that I worked for, we provided protective services and kind of risk analysis for companies that were operating in hostile environments and war zones. One of the things that I did was go to Iraq. I was in Baghdad and Basra and then up north in Erbil and Sulaymaniyah. There were some pretty tense situations there. It was such an amazing place, so amazing, but yeah, there were some really tough situations there and actually, there was a moment, there was a rocket attack that happened very close to us and that was actually the moment that made me really decide that I should write this book and really go for it because at that point I'd been kind of putting it on the back burner and because, you know, my career in private security was so interesting but that moment really crystallized it for me. It was like, you have to try. You have to do the thing that you have wanted to do your whole life. You got to do it now.

GOLDSTEIN: As you said writing a book is a major challenge in and of itself but creating a new world I think is amazing, you know, "The Hunger Games," big bestseller, H"arry Potter," all those were big bestsellers. Creating the world, all these new characters and having to keep track of all this, was that exciting in and of itself but did it also feel like, wow, there's a lot to keep track of here. These are not like three people walking on the street New York and having some conversation. There are all sorts of multi-universes and whatnot.

SHEPHERD: This might sound weird but I actually think it was easier for me to keep track of all that, rather than, because I had made it, you know, and it takes a lot of imagination to make that and a lot of work and I had to fit it all together. So I almost feel like it was easier for me to remember everything than if I had set it somewhere real that I might not be super familiar with.

GOLDSTEIN: Your hometown is Phoenix for the most part. I'm sure you've lived other places. There's some people who've talked about the inspiration that the desert has, because the desert is such a mysterious place. What was your imagination like in the sense of living in a place like this? Because this is kind of an odd place. I think about growing up with monsoon storms and everything else. It's sort of strange and it takes some getting used to. Did this place inspire you in any way, as far as a creative person?

SHEPHERD: I think it definitely did. The desert is — you know, just the vastness of it, the seemingly emptiness of it. It's beautiful but you can just tell right there, lurking under this beautiful surface, that it can be very dangerous. Yeah, the monsoons, you mentioned the monsoons. Those are, I mean, they seem almost magical. They come so suddenly. They're so intense. People just run for any kind of cover and the thunder and the lightning is so loud and kind of terrifying. There's a hurricane that happens in the novel and it's kind of a pivotal moment in the story but I've never actually been in a hurricane, but I have been in monsoons and so I kind of wonder if maybe that didn't inform that scene.

GOLDSTEIN: Peng Shepherd is the author of "The Book of M." She is also a Valley native and she will be signing books at Changing Hands Bookstore on June 5. Peng, thank you.

SHEPHERD: Thank you so much.