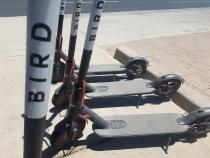 Sky Schaudt/KJZZ
Bird scooters parked at a bus stop in Tempe in June 2018.

Bird is a startup motorized scooter company based in Santa Monica and run by a former Lyft and Uber executive that rents motorized scooters. It has about 200 to 300 scooters out in Scottsdale and Tempe.

Bird says the exact numbers are proprietary. Anyone looking to ride one of their vehicles uses an app to locate a scooter and, later, leave it where they want. At the end of day, Bird is responsible for picking up the discarded scooter and recharging it.

Jerod MacDonald-Evoy of the Arizona Republic explained to The Show how the business works.

The problem is that reality doesn’t match the sales pitch, at least that’s how the city of Scottsdale sees it. At the beginning of May, Scottsdale wanted Bird out, saying they had to remove their scooters or face $400 fines per scooter per day.

So what caused the fracas in Scottsdale? The Instagram account, litterbikesofaz, highlights the often lackadaisical way rental bikes are left on the roadside, something that many people consider an eyesore and littering problem.

However, Scottsdale has had a change of heart. They told Bird the scooters would be allowed in the city as long as they stuck to three big rules: scooters must always be used on roads and not sidewalks or trails, they cannot be in parks or parking garages, and no more staging the rentals on sidewalks.

The scooters are also in Tempe where officials have taken a more laissez-faire approach.

Phoenix, in contrast, has banned motorized scooters from parks completely as well as “all self-propelled devices with a motor, two wheels and a deck on which to ride” from roads. Segways, a type of upright scooters, are OK if they follow rights of pedestrians and the rider is 16 or older.

As is the case with all new tech, cities are finding themselves playing catch up with regulation, trying to please citizens who love or loathe these scooters.