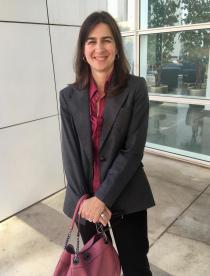 On her first day of training as a health care provider in an Arizona state prison, Angela Fischer said an Arizona Department of Corrections employee told her a joke.

“How do you know when a patient is lying?”

“Their lips are moving.”

Fischer, a licensed mental health counselor, didn’t think it was funny. She recalled the offensive joke in her testimony at a hearing in the Parsons vs. Ryan prison health care settlement in federal court on Thursday.

Fischer said the joke was indicative of her time working as a psychology associate for Corizon Health at the state prison in Phoenix.

“There was an indoctrination process that started at the beginning,” she told the court, “which dehumanized the people we were treating.”

Fischer worked from October 2016 to March 2018 at an in-patient psychiatric unit, which houses some of the most acutely mentally ill people in the state’s custody.

After a year and half on the job, Fischer quit so she could blow the whistle on what she says is a lack of proper care for seriously mentally ill patients.

Fischer took her allegations to ACLU attorneys involved in the Parsons case, who filed them in federal court. Magistrate Judge David Duncan then ordered Fischer to testify.

ACLU attorney David Fathi asked Fischer to describe her background in mental health to the court Thursday morning. Fischer said she has a master's degree in counseling and holds a licensed professional counselor license.

Fischer said she is “one defense away from a doctoral degree in clinical psychology,” which she anticipated achieving this summer.

From 2002 to 2012, she was the statewide HIPPA coordinator for Arizona.

Fischer said she worked for the Maricopa County Correctional Health Services in various roles from 2012 to 2016.

Fischer said she supervised nine mental health staff members and oversaw the mental health treatment of 900 patients while she was employed by the county.

Beginning in October of 2016, Fischer worked at the state prison in Phoenix, which includes an intake facility for mental and physical health care screenings as well as an in-patient facility for acutely mentally ill inmates.

Fischer said the in-patient facility is divided into wards. “The most acute patients, those that are in crisis, are housed in Quiet Ward,” Fischer said. She described this section as made up of a number of cells where people are on suicide watch.

Based on her previous experience, Fischer believed severely mentally ill patients needed at least 30 minutes of therapy every week.

However during her tenure at ADC, she said she was stretched too thin. Fischer said there was never enough time to devote to the 16 to 20 patients she was expected to see each day.

In her testimony Fischer said there were many patients at the prison who would only receive 10 minutes of treatment a week.

“When a patient is in distress they need someone who can stand there and be with them and counsel them and help them,” she said. “If a list of patients is 20-25 people long, it’s hard to give that person the time that they need.”

She told the court she left the position in March of 2018 for several reasons.

“Most important to me was the lack of quality care the patients were receiving,” she said. “After many months of trying to work to improve that treatment, it came to a point where I didn’t think I could be effective.”

Fathi directed Fischer to read from a number of emails she had sent to her supervisors at ADC and Corizon, including the chairman of the private company’s board of directors, regarding her concerns about the lack of care.

“I thought we were doing a lot of box checking,” she said, “And not providing a lot of care.”

Fischer testified that inadequate staffing was one reason for the lack of treatment. She said there was never a time during her 18 months at the Phoenix prison when the mental health department was fully staffed.

Meanwhile Fischer said turnover was rampant. During her time at ADC, she said there were six different mental health directors at the Phoenix prison.

Sleeping COs And Suicide Attempts

“There were things happening at the prison that were putting staff members and the patients in harm’s way,” Fischer said. She described how dangerous inmates were brought to her office unrestrained and other patients were left to move freely about the unit without proper supervision.

“Things like that jeopardized my safety and I wasn’t comfortable there anymore” she said on her decision to leave.

Fischer said many of the security lapses happened because correctional officers were repeatedly found sleeping on the job.

Suicidal inmates that were put on “constant watch” require a Correctional Officer to watch them 24 hours a day to make sure they don’t hurt themselves. But Fischer said these were the officers that would often doze off, risking the patients’ lives.

Fischer told the court of one instance when an inmate on constant watch was able to hang himself in October of 2017.

“He took strips of sheets that he found in the legs of the bed, tied them around his neck, attached it to the sink and was found unconscious 30 minutes later, all while on constant suicide watch.”

Recalling the incident brought Fischer to tears. She said she continued to find officers sleeping on constant watch after the suicide attempt.

“Or they have abandoned their post all together and are nowhere to be found,” Fischer said. “I reported these issues each and every time they occurred and it happened day, after day, after day.”

When defense attorney Rachel Love asked Fischer why she didn’t try to physically rouse the sleeping correctional officers, Fischer replied that she would in fact have to wake them up.

“I’d be like, ‘Hey, dude, come on, what are you doing? We’ve got things to do.’ I didn’t just walk away from people sleeping on constant suicide watches,” she said.

Fischer told the court she would file IR’s or Information Reports when she found sleeping correctional officers, which led the officers to retaliate against her.

“They would turn their backs to me when I would try and speak with them and act like they couldn’t hear me,” Fischer said. She reported that the officers would also refuse to retrieve her patients for their counseling sessions.

Reading an email she wrote to her superiors about the retaliation, Fischer said, “I can’t keep writing IRs on these things or it will become impossible for me to get cooperation from the officers.”

Fischer said she believed correctional officers would intentionally bring her patients that were not in restraints to threaten her safety.

One such instance led to an assault on Fischer. She recalled how a faulty door lock prevented her from securing herself from an attack against an angry patient.

“I just pushed the door closed and held it with my body while she was banging the door against me,” Fischer said.

According to Fischer, the cells in the mental health unit would often smell of urine and feces. She said blood and other bodily fluids were commonly observed in the cells, which were not cleaned in between inmate movements.

On one occasion Fischer observed an unrestrained inmate on suicide watch, outside of his cell, unsupervised. When she asked a guard in the control room why the inmate was out, the guard informed her that he was cleaning feces left by a previous inmate from the doorway of his cell.

“Cleanliness affects a person’s health,” Fischer said. “Their mental health is affected when they are exposed to smells that are not ok, temperatures that are not ok - they decompensate.”

Fischer also reported the mental health unit was infested with gnats, cockroaches and mice. At one point Fischer said she encouraged the Deputy Warden of the Phoenix prison to supply styrofoam coolers for the inmates because the mice were eating their food.

Fischer’s testimony is part of an ongoing evidentiary hearing in the Parsons versus Ryan prison health care settlement. Magistrate Judge David Duncan is weighing the validity of the monitoring process that was installed to make sure Corizon and ADC live up to health care performance measures agreed to in the settlement.

Fischer said she was unsuccessful in many attempts to learn more about those performance measures.

She was, however, given instruction on what to do to avoid missing certain time limits for treatment that were being watched by the state monitors.

“If the patient’s treatment plan was missed, you had to do it as quickly as possible,” Fischer said. “And then next day, or as soon as possible, put a new one in, because what the monitor is looking for is the distance between one treatment plan and another.”

Fischer’s testimony called the very nature of the medical records used by the monitoring team into question.

She told the court that entries and descriptions of services provided could be backdated to make it appear they had been performed on time when they were not.

Fischer also provided the court with several examples of medical notes that had been written by a registered nurse but entered into the monitoring system as if they were performed by a psychiatrist.

In other instances Fischer said she was told what to write to ensure that her records would show up as compliant in the monitoring report.

David Fathi asked Fischer to react to compliance scores from November and December of 2017 showing the Phoenix prison getting passing marks for mental health.

“I was surprised by them,” Fischer said. “Because in November and December I know that there were patients that were on suicide watch that weren’t seen, and it was not reflected in the scores for those two months.”

“Most people don’t do what you did,” Duncan said. “That is, go on some kind of Sherlock Holmes mission trying to figure out whom you could bring this information to.”

The judge told Fischer that most people choose not to blow the whistle because it wouldn’t lead to any tangible benefits for them, but he had learned a great deal from her testimony.

“I want you to understand — I appreciate that you you did this,” Duncan said.

Interviewed outside the courthouse after her testimony, Fischer said despite fearing for her personal safety, she wanted the court to know about the conditions in the Phoenix prison.

“There are a lot of people suffering in this system,” Fischer said of her patients. “I’m glad that I had a chance to speak up for people who don’t have the opportunity to speak up for themselves.”