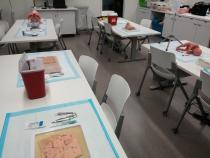 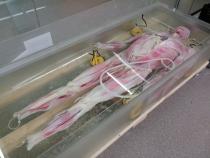 Photo by Andrew Bernier - KJZZ
A "SynDaver" in one of the UA Simulation Labs. 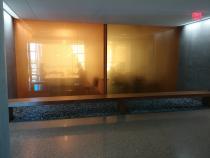 The University of Arizona is turning empty lots at 7th Street and Van Buren Street in Downtown Phoenix into what they call a world-class medical school. And it appears the world is noticing, though it still lags behind other U.S. cities.

Representatives from the Royal College of Surgeons in Dublin visited UA’s Health Sciences and Education Building here in the Valley, which was built two years ago. Back home, The Royal College tore down one of its older buildings and is looking for a model to base a design for a new building of their own.

“We’ve been to many other sites to benchmark and we think this is by far and away the best," said Judith Gilroy with the Royal College.

Gilroy notes the standardized patient rooms, where simulation spaces stage patient actors and students, will be added to the plans.

“There are 24 standardized patient rooms where patients come in, they’re trained and then they get to have a one-on-one interaction with the students," Gilroy said. "It’s all videoed and the students get feedback. It’s an incredibly powerful learning tool and we didn’t have that. And when we came away from here we went back and said we’ve got to build that into our building.”

“It’s hard to believe but up until seven years ago Phoenix did not have an MD Medical School," Otu said. "And now we have this building. We just broke ground a couple weeks ago on a 10 story research building, a cancer center is right across the street. So, the footprint just continues to grow.”

As Arizona continues to face a physician shortage, the new campus hopes to inspire more students in Arizona to pursue medicine, and may inspire medical schools across the world too.