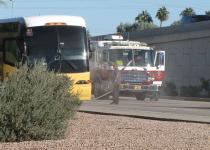 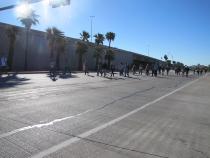 (Photo by Carrie Jung - KJZZ)
ASU shuttle bus passengers walk on the southbound off-ramp of State Route 143 at University Drive, after the ramp had been blocked off by police.

The southbound off-ramp on State Route 143 at University Drive was blocked Thursday morning due to a bus fire.

According to eyewitness accounts, the incident started when a tire exploded.

"And they decided to pull over as soon as we got off," said passenger Ben Goode. "And as we got off and everyone was cleared off, backing up, another one burst and that’s what started the fire and an increased volume of it."

Passengers were being loaded onto a new bus around 9:30 a.m. as officials secured the area.