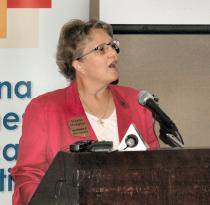 Diane Douglas, Arizona's superintendent of public instruction, is trying to limit the use of the word “evolution” in Arizona high schools.

Her department is proposing that it replace the word “evolution” with "biological diversity” in the state’s new science standards — what students are supposed to be taught in our state’s high schools. Any mention of evolution would also be referred to as “the theory of evolution,” a subtle but, some say, significant change.

Douglas defended the changes to Capitol Media Services, saying they have nothing to do with imposing a theory of “intelligent design” on schools. She feels it is a reasonable ask of teachers.

"We have absolutely nothing in these standards in reference to intelligent design or creationism or whatever anybody else wants to call it, [but] evolution is a theory in many ways," said Douglas. "And that's what our children should understand, that while there are parts and pieces of it that are, we can I think agree, are proven science, there are other areas of it that are very theoretical, and if we're going to educate our children instead of just indoctrinate them to one way of thinking, we have to be able to allow them to explore all types of areas."

Douglas said that personal beliefs aside, Arizona students should be open to all ideas and this change opens up those possibilities.

"I mean, the point of education is to really be seekers of the truth, whatever the truth may be," she said. "And that's what all standards, in my opinion, should work towards that end. You know, once upon a time people said the earth was flat and it couldn't possibly be round. You know? I don't know."

While these proposed changes are not new teaching curriculum, which means teachers aren’t being told what to teach, these are still the expectations on what Arizona students should learn.

Many are concerned that without evolution in the state’s standards, some schools or teachers who don’t want to teach it won’t have to.

A lot of science educators are upset by this change including Sara Torres, executive director of the Arizona Science Teachers Association. She said the Department of Education’s internal review of the new science standards was a little different this year than in years past.

A committee of 100 educators, parents and community members took more than a year and a half to put together those new standards, Torres said, and the content that was changed raises some serious concerns.