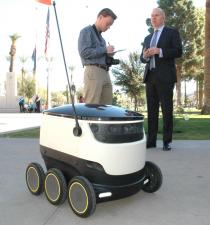 Head's up and toes in as we make way for robots on Arizona sidewalks.

The robots will have permission, beginning in August, to deliver anything from pizza, to flowers, to letters and packages.

There are some limitations, including a 200-pound weight limit, liability insurance coverage, and working brakes on each unit. These items were originally stripped by state senators, then re-inserted after Uber's fatal accident in Tempe.

As he signed the bill, Ducey did not elaborate on why he favored it.

But, his spokesman Daniel Scarpinato said, "We want to make sure Arizona is positioned in a place where these things can function here, can be tested here, and where residents of the state can benefit from these new technologies as they're developing."

The law has a self-destruct clause if, after two years in effect, lawmakers fail to renew permits allowing the robots to safely share the public sidewalks.