When President Donald Trump signed a sweeping tax cut measure into law late last year, he touted it as a bill for jobs. By lowering the corporate tax rate, his administration said companies will invest in more equipment and people. But small businesses in Arizona need more than a tax cut to spur growth.

“When we started we had two of these machines,” he said pointing to equipment that makes metal parts for defense contractors.

Eighteen years later, Macias and his partner, Jack Cuddihy, have 17 employees and 12 machines.

Two high-speed machines arrived less than a month after the president signed the tax bill. The law lets Macias avoid paying federal tax on 20 percent of his company’s income. But that’s not the sole reason they ordered machines.

“When you saw a renewed interest in defense funding that certainly helped,” he said. “What really helped too was the passing of a budget on a federal level.”

Passing an annual budget instead of continuously passing bills to just keep the government running a few months at a time provided more certainty for Macias’s customers and more business for him. It’s been a similar experience for Carlos Ruiz.

“We’re just getting demand from everywhere,” he said.

His Tucson-based company, HT Metals, cuts pieces for aerospace and medical device industries. In early May, Ruiz told a crowd gathered in Tempe to see Vice President Mike Pence that he recently spent a couple hundred thousand dollars on a new machine. 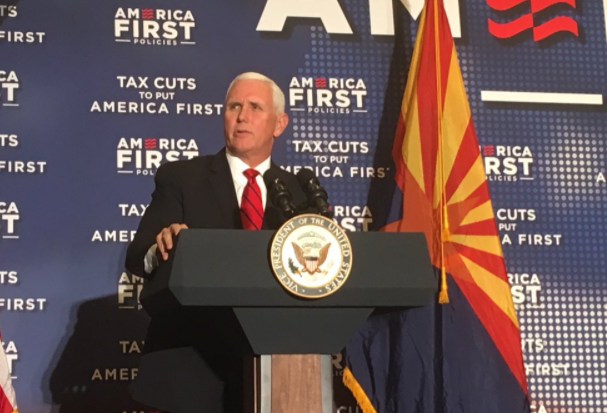 Jiimmy Jenkins/KJZZ
Vice President Mike Pence speaks at the Phoenix Marriott at the Buttes on May 1, 2018.

“And, we get to expense it immediately,” he said.

Moments later, Pence took the stage and described the benefits to Arizona workers.

“In the years ahead we believe that as businesses continue to respond to this unprecedented tax relief we expect the average Arizona worker is going to see a pay raise of about $4,000 a year,” he said.

The $4,000 figure comes from a White House report produced by President Trump’s Council of Economic Advisers. Two key points: the report refers to a $4,000 raise for an average American household or family, not an individual. And it’s couched around language like “over time” and “over the long run."

“I’d be very cautious of what I’m told by a politician either on the right or on the left,” said Dennis Hoffman, economics professor and director of the L. William Seidman Research Institute at Arizona State University’s W.P. Carey School of Business.

Many companies with a strong Arizona presence, including FedEx and U-Haul, Lowes and Home Depot, Western Alliance and Wells Fargo, announced raises and bonuses as a result of tax cuts. Critics have called it a gimmick. Hoffman said the tight labor market makes it complicated.

“We don’t know how much of those bonuses and raises would have been awarded anyway,” he said. “Certainly the tax cut made it easier for those businesses to award raises. Now, my guess is if the labor markets remain tight next year and the following we’re going to see a continued raise and the ongoing lower tax rate will help make that happen, but there’s not going to be an impetus for that raise without a tight labor market.”

“Why were companies relocating their companies to Ireland? It wasn’t because of Irish whiskey. It was because of their tax structure.”
— Steve Macias

In March, Morgan Stanley released a report  about how companies planned to spend their tax savings. The investment bank said its researchers analyzed more than 400 earnings transcripts and found slightly more than 20 percent of tax savings will go to employee compensation.

A Bloomberg article from last March reported, “about 60 percent of the gains are going to shareholders, compared to 15 percent for employees.”

“Why were companies relocating their companies to Ireland? It wasn’t because of Irish whiskey. It was because of their tax structure,” he said. “That’s why they were doing it because the corporation is beholden to their shareholders. You have to maximize value. This tax cut allows larger corporations who are our customers — I can’t make a Tomahawk missile but I can make parts for it — tax cuts allow those corporations to now invest in the U.S. which helps me.”

“Truly understanding it and measuring it precisely is going to be difficult,” he said. “But the impacts are going to accrue or not accrue over the next, let’s say, three to five years.”

Over the next five years, Macias and his partner want to double their revenue and employees. If they do, they could be eligible for more tax benefits.