Owl That Trapped Arizona Teen In Car Found, In Rehab 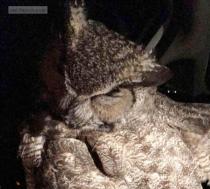 (Photo Courtesy of Ryly Sawyer)
Wildlife officials believe they've found the owl that was hit by a car earlier this week - and then latched onto the teen trying to save it.

Earlier this week, a teenager in Southern Arizona gained a bit of fame after she hit an owl with her car – and then was trapped by the bird in her vehicle for 20 minutes.

Wildlife officials now believe that persistent owl has been found.

It has an injured eye and will probably be in rehab a few weeks, but its prognosis looks good.

It’s a happy ending, said Mark Hart, who is with the Arizona Game and Fish Department’s Tucson office.

“In all probability, it will become an educational animal, if it’s deemed not releasable to the wild, and that’s a good outcome,” Hart said. “If you can’t run wild anymore, you can help educate people about wildlife and birds of prey.”

And the bird has already educated people – about not approaching wildlife, even to try to help. After being hit, the owl awoke in the driver’s lap. It latched onto the teen’s steering wheel and sleeve, until the she was finally able to delicately remove it and set in on the side of Oracle Road, north of Tucson.

Game and Fish later found it in the same spot.