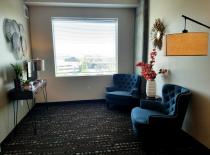 Annika Cline/KJZZ
This model unit at a BridgeWater assisted living facility includes sensors on the walls, door and other places.

Technology has opened up a new door to our health information. Instead of just feeling like you’ve been more active, you can wear a fitness tracker that tells you you took more steps this month than last.

And going a few steps further, there are now senior homes outfitted with sensors everywhere to track the well-being of the residents.

Greg Corns is the COO of BridgeWater Assisted Living, and he took The Show's Annika Cline on a tour of one of their newest buildings, in midtown Phoenix.

“This is a common one bedroom,” Corns said, opening a door. “A little kitchenette area, complete with small refrigerator, a microwave, sink…”

Oh, and there are these sensors.

“We have sensors on toilets, within the bed, on the refrigerator, on the walls and on the doors,” Corns said.

You have to really look to see them — and they can’t see you, not in that way. There are no cameras here, just movement trackers. When a resident moves in, the sensors gather baseline data about their routine.

We’ll get to how that information comes in handy in a moment. First, there’s an elephant in this room that needs to be addressed: privacy.

“Initially they were a little skeptical,” Corns said, referring to some residents at BridgeWater. “Like, you’re watching me, and you know my every movement. That was a handful of residents, and since it’s subsided — nobody even questions it anymore.”

Siek studies health informatics — basically, the management of patient health information, including through technology. She said their research shows families do enjoy being able to see, through data, that their loved one is doing well, but this has to be balanced with privacy.

And she said researchers studying these types of sensors are working on how to not over-monitor people. She pointed to a study in which an older adult kept getting up and sitting down over and over throughout the evening.

“And the staff came in and said, ‘Hi, we saw that you got up and sat down last Friday like a dozen times in an hour, were you okay?’ And the older adult said, ‘It’s Halloween, I was getting up to take care of the trick or treaters!’” Siek said.

But she said when the sensors raise a real red flag about a senior’s health, it can make a big difference. And that’s why Corns is so excited about them.

“The nurse has a dashboard, and it gets populated on this dashboard to say: it’s rather unusual, this resident is displaying signs of going to the bathroom more than what they have in the past,” Corns said. “We’d have a conversation with them and ask them some questions; a lot of times we find what the cause is. Typically, it’s a urinary tract infection — somebody’s not drinking enough water.”

Something like a UTI could cause a senior’s health to drop rapidly, and lead to an expensive visit to the hospital. Catching it early can prevent that. Corns said the sensors have also tracked weird changes in routines — like a resident leaving their room in the middle of the night — that could point to the beginning of Alzheimer's. All this information would either go unnoticed by staff, or they’d have to do a lot more checking in to gather it.

“And it gives us eyes behind the door when the caregiver’s outside, that we can see what’s going on without being obtrusive,” Corns said.

But Siek sees this as a balancing act, too.

“Some older adults see these as opportunities for interaction, so just because they don’t need you doesn’t mean they don’t enjoy your company,” she said.

Any new sensor data, she said, should be followed by a good, old fashioned in-person conversation.