Mikkel Jordahl never expected his views on the Israeli-Palestinian conflict to come up in his job. After all, he gives legal advice to inmates in Arizona.

“It has nothing to do with any of the contracts I have signed,” said Jordahl, an attorney from Sedona, Arizona.

But several years ago, Jordahl’s part-time contract with the county jail became an unexpected flashpoint in the debate over peace in the Middle East. A new clause appeared in his contract requiring him to certify that he wasn’t involved in a boycott of Israel. 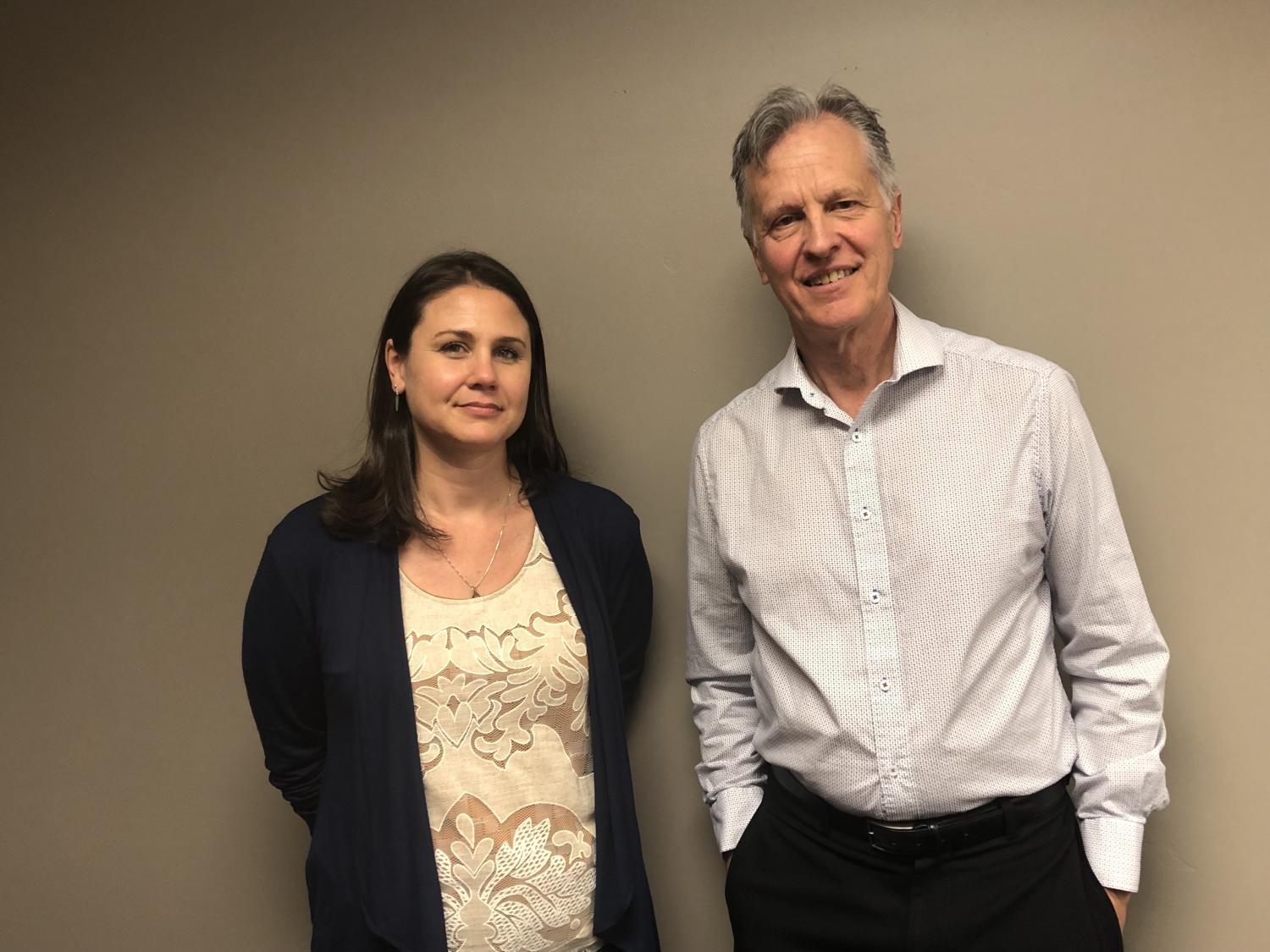 Will Stone/KJZZ
Kathy Brody of the ACLU and her client Mikkel Jordahl (right) who has sued Arizona over a new law that prohibits him from boycotting Israel while working for the state.

That put Jordahl in a difficult situation.

He has long advocated for Palestinian human rights and an end to Jewish settlements ever since visiting the West Bank during the 70s.

“Our government is complicit in funding the occupation and I think it’s fundamentally wrong,” Jordahl said.

Still, he decided to sign the contract under protest and sent a letter to his employer making his opposition known. The next year he took his son on a belated Bar Mitzvah trip to Israel.

After that, the attorney said he couldn’t in good conscience sign the contract again.

“Signing a political litmus test for a government contract is a violation of the Constitution,” Jordahl said. “I just felt like I had to put my foot down.”

Instead of renewing his contract, he sued the state and argued the requirement infringed on his free speech.

Jordahl is the first to take aim at a relatively new Arizona law that prohibits state and local governments from doing business with anyone engaged in a boycott of Israel.

“My main focus is on boycotting the companies that are profiting from the occupation on the West Bank,” he said.

For example, Jordahl doesn’t want his law firm to buy Hewlett-Packard office equipment because the company provides technical support to Israeli security, but he said the Arizona law gives him no choice.

Jordahl doesn’t subscribe to one particular organized boycott. Instead, he models his actions after a variety of organizations that encourage using economic pressure to change Israeli policies — groups like Jewish Voice for Peace and the Evangelical Lutheran Church.

“It is like a loyalty oath. It is like asking someone to say that they are not a member of the communist party,” said Kathy Brody, Arizona’s ACLU legal director. “Our Supreme Court has recognized that political boycotts are a form of protected speech.”

Are Boycotts A Protected Form Of Expression?

This kind of debate goes back to a landmark 1982 civil rights case. The U.S. Supreme Court ruled the NAACP’s boycott of white-owned businesses in the South was a protected form of expression that sought to bring about political, economic and social change.

“I don’t think any of us wants the government to tell us we are or are not allowed to speak out on a certain issue,” Brody said. “This law in Arizona is part of a nationwide assault on the First Amendment.”

Arizona isn’t the only state trying to tamp down on anti-Israeli sentiment.

In recent years, about two dozen states have passed laws or executive orders to stymie boycotts in reaction to the growing influence of a prominent pro-Palestinian movement, known as Boycott Divestment & Sanctions or “BDS.”

“Boycotts and related tactics have become a tool of economic warfare that threaten the sovereignty and security of key allies and trade partners of the United States,” the Arizona law states.

Proponents of anti-BDS laws like Marc Stern of the American Jewish Committee agree.

“There’s been a concerted effort to shut off Israel economically, culturally from the rest of the world,” said Stern, working as general counsel for the Jewish advocacy group.

Stern said Jordahl can boycott Israel in his personal life, but the state doesn’t have to hire him.

“You don’t have a right to say I am going to offer you services, but I am going to restrict the market because I am boycotting Israel,” Stern said. “The state can say okay, fine, but not on our dime.”

A series of Supreme Court cases involving issues like abortion and political lobbying back up this argument, Stern said.

“Many of those rules could not be imposed on the society at large, but they can be imposed on people getting money from the government,” Stern said.

Stern believes Arizona’s case could have implications for anti-BDS laws across the country.

The ACLU recently sued Kansas over its version of the law. In January, a federal judge ruled against the state and issued a preliminary injunction to block enforcement of the law.

“The Supreme Court has held that the First Amendment protects the right to participate in a boycott like the one punished by the Kansas law,” Federal Judge Daniel D. Crabtree wrote in his order.

Kansas lawmakers have since tweaked the law in an effort to skirt the free speech issues. Stern said that will likely make the case moot, which means Arizona’s law could be the first to reach a federal appeals court.

The Arizona Attorney General’s Office makes a similar argument as Stern in its defense of the law — namely, that Arizona has the authority to regulate its economic activity, especially with a key trading partner like Israel.

“The case law is very clear that boycotts such as this don’t involve any First Amendment protection,” said Drew Ensign, senior litigation counsel at the Arizona Attorney General’s Office.

Ensign cited a unanimous Supreme Court decision that found union workers could not refuse to unload goods from the Soviet Union because they disagreed with its policies.

But he said the state’s defense also hinges on the question of discrimination.

Arizona’s law applies to any boycott of Israel that “discriminates on the basis of nationality, national origin or religion.”

“Anti-discrimination laws have been widely and almost uniformly upheld against First Amendment challenges,” Ensign said. “Prohibiting discrimination is one of the highest interests of any government.”

It’s still not clear that the judge will even wade into the reach of the First Amendment when organizing political boycotts.

That depends on whether Jordahl’s boycott even qualifies as a true boycott. In its filings, the state argues the law doesn’t apply to him; rather, his refusal to buy some Israeli goods and not others puts him outside the scope of the law.

Only organized and broad boycotts of all Israeli goods fall within the law, Ensign said.

That is a surprising concession, according to David Schraub who teaches at the UC Berkeley School of Law.

“[The laws] are being written in one way, but being applied in another way. That sloppiness is particularly dangerous in the First Amendment context.”
— David Schraub, lecturer at UC Berkely School of Law

“The state is taking a very, very narrow interpretation of its own law and one that is outside the mainstream of what a lot of people consider these laws to do,” Schraub said.

Limiting the reach of the law ties the case closer to the state’s legitimate interest in deciding how to spend public dollars, Schraub said. But he points out that many of these anti-BDS bills were passed quickly and primarily for ideological reasons.

Now they are being tested.

“[The laws] are being written in one way, but being applied in another way. That sloppiness is particularly dangerous in the First Amendment context,” said Schraub.

This lawsuit comes at a moment when questions of free speech and discrimination are emerging on many fronts. For example, the Supreme Court is poised to rule on whether a Colorado baker can refuse to design a wedding cake for a same-sex couple.

Schraub said the key is to make sure these laws are not written in a way that seems unique to the Israel-Palestine context.

“There’s no reason to say this particular kind of boycott falls outside the protections of the First Amendment, nor is there grounds to say they gain exceptional protection,” Schraub said.

That’s how Jordahl sees it — regardless of how you feel about boycotting Israel.

“What’s to prevent the legislature from saying we won’t allow contracts with those who support Democrats or Republicans?” he said. “It’s completely un-American.”