Owl Traps Arizona Teen Trying To Save It 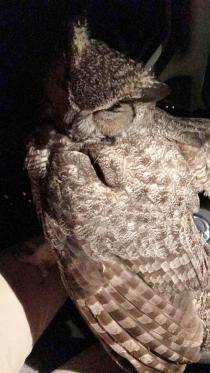 Ryly Sawyer
Oracle teen Ryly Sawyer stopped to help an owl she had accidentally hit with her car. Though it appeared dead, it quickly awoke — and latched onto Ryly and her steering wheel. 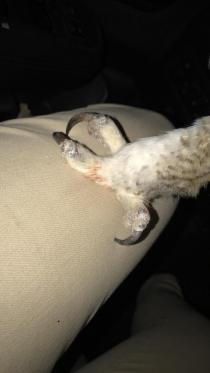 Ryly Sawyer
The owl latched onto Sawyer for about 20 minutes, until she was able to slowly pry it off and place it on the ground. 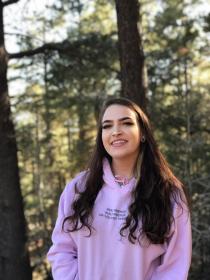 A young woman from the southern Arizona town of Oracle is getting notoriety for a close encounter of the bird kind.

Driving home late Monday night, 18-year-old Ryly Sawyer didn’t see the great horned owl in the dark road until it was too late. After the thud, it lay motionless on the pavement.

“And I was devastated,” she said. “I pulled over to the side of the road and called my mom, and I was bawling.”

Sawyer ran over, scooped it up, held it in the car. Dead, for sure, she thought.

“And then he, like, grabbed onto my steering wheel with his claws, his talons, and I was, like, ‘Oh my God, he’s alive!’”

And it was not budging, with one sharp talon attached to Sawyer’s sleeve and the other to her steering wheel.

The stand-off lasted 20 minutes, with Sawyer on the phone with a dispatcher from the Arizona Game and Fish Department.

Mark Hart, with the department’s Tucson office, said the teen could have easily been hurt.

“We want folks to understand that while their Good Samaritan side may want to help, they can cause more harm than good, including to themselves.”

As for Ryly Sawyer, she got lucky, and was able to slowly flip the owl nearly upside down, then delicately pry it off the steering wheel and set it in a safe spot, where it was last seen. Based on her photos and videos, Game and Fish determined the bird was not hurt.