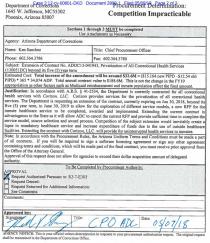 The Arizona Department of Corrections (ADC) has extended its prison health care contract with Corizon Health.

The contract was revealed in federal court Tuesday after it was filed in the Parsons v. Ryan prison health care case.

In a procurement document entitled "Competition Impractical," ADC explained the one-year renewal will give the state a chance to "allow for the exploration of different service models" and to develop a new RFP for heath care services.

"Extending the current contract is advantageous to the state as it will allow ADC to cancel the current RFP and provide sufficient time to complete the service model, source selection and award process," wrote Chief Procurement Officer Ken Sanchez.

A cap that was previously placed on state sanctions but recently lifted remains out of the contract. There is no mention of incentive pay for the company as in previous agreements.

The per diem rate for health care will increase from $12.54 per inmate per day to $15.164. According to the procurement document, the hike in the per diem rate increased Corizon's contract by $32.6 million — bringing the total cost of the contract to $188.6 million.

Corene Kendrick with the Prison Law Office, a firm representing Arizona prisoners, called the renewal and the 20 percent increase in the per diem rate “surprising.”

When pressed in court about previous per diem increases, Arizona Department of Corrections Director Charles Ryan called them “the price of doing business.”

Kendrick says she is performing of analysis of the staffing changes in the contract to see how the personnel shifts may impact prisoners.

The contract also specifies more than $5 million for hepatitis C treatment. At a recent hearing, a Corizon employee estimated more than 80 percent of inmates had hepatitis C.

An analysis performed by the Prison Law Office of the staffing changes in the new contract amendment shows an increase in line level staffing, but a decrease in provider level positions.

Compared to the March 2018 monthly staffing report, the amendment shows physicians down from 14 to 12, while RN, LPN, and nursing assistants significantly increase in number.

Dental director positions and dentists are down, which Kendrick says is a violation of a specific performance measure in the Parsons settlement agreement. "Performance measure three explicitly says they must have a total of 30.0 dentist positions statewide – they’ve cut it to 26.0," she said.

Kendrick said the amendment shows the same pattern in the mental health staffing. "There are cuts to higher provider levels and an increase to lower level staff," Kendrick said.

She believes the numbers show positions like Mental Health Nurse Practitioner are being cut from prisons like Eyman and Florence to offset increases elsewhere.

ADC and Corizon staff have testified in federal court that the lack of provider level positions is having a negative impact on inmate health care. Prisoners with broken bones and life-threatening illness have claimed they are not given proper treatment in time due to the lack of specialty care. These positions have been vacant or understaffed for so long, Magistrate Judge David Duncan hired an expert to address the staffing problems.

“The implication of cutting higher-level provider positions such as physicians, dentists and psychologists in the contract, and simultaneously becoming more reliant upon registered nurses or psych associates, increases the probability that the delivery of health care falls upon staff who may be forced to practice outside of their scope of training,” Kendrick said. “In the past, both our medical and mental health experts have noted that ADC and Corizon’s tendency to push work on to people with more limited training can result in serious injuries or deaths.”

Corizon Health spokesman Kurt Davis said the company was "very grateful to have earned an extension of the current contract with ADC to continue the delivery of both medical and behavior health services to Arizona inmates."

EDITOR'S NOTE: This story has been modified to clarify the source of the hepatitis C estimate.