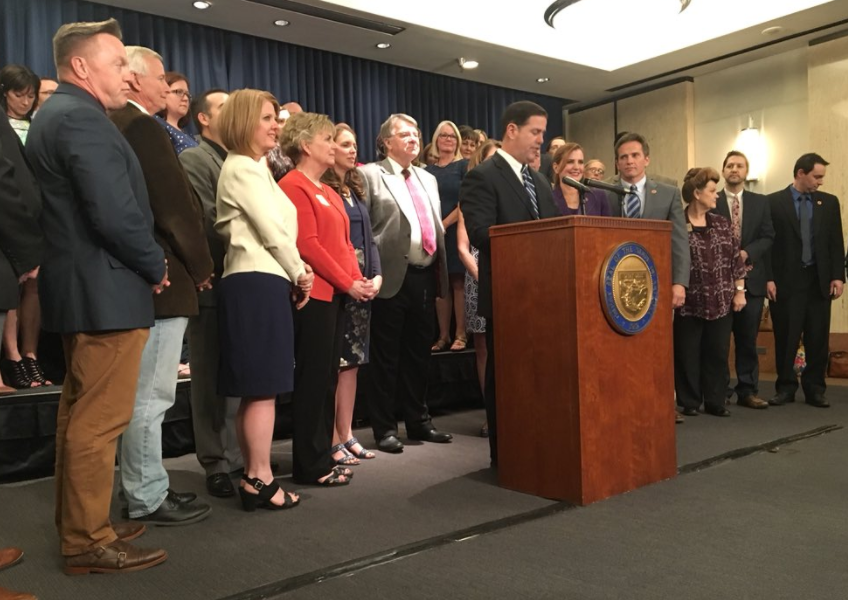 Standing by his "no tax" credo, Gov. Doug Ducey said he'd rather see the state "live within its means" than support an educators' ballot initiative taxing the top 2.5 percent wage earners. But, he may need that tax to fulfill his pay raise promise.

Within days after unveiling his plan to increase teacher pay raises by 9 percent this fall, followed by an additional 5 percent for each of the next two years, educators have learned those dollars will not be distributed "across the board" as originally understood.

Although analysts estimated a $650 million price tag to implement those raises, the Legislature voted to distribute the dollars directly to the districts based on teacher head count, rather than on cost of living and base salaries.

"We'll need to work with the superintendents and principals," Ducey said, explaining that his promise was made based on the current teacher's average salary.

"To clarify," he said, "The amount of dollars that will be going into teacher pay will be an increase of 20 percent in total," and that, "The state's in the resource business. The superintendents and principals are going to stay in the personnel business."

Education organizers went on a six day walkout to secure pay raises for both themselves, school staff members and force the state to finally restore the $371 million a year operating funds it has failed to pay since the Great Recession.

Blaming state lawmakers of cutting taxes for the wealthy while destabilizing public school funding, educators plan to send a ballot initiative to voters in November that would raise the current income tax rate to 8 percent for Arizona's top 2.5 percent wage earners.

They predict the tax would raise nearly $700 million annually, allowing the state to stabilize its ambiguous education funding source.