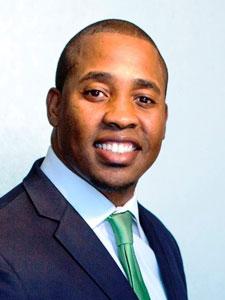 riosalado.edu
LeRodrick Terry was hired to be the vice president of student affairs at Rio Salado College with the Maricopa County Community College District on July 1, 2015.

An executive at Rio Salado College is resigning after an investigation substantiated claims of inappropriate workplace behavior.

The investigation began in January when complaints from 2017 came to the Maricopa County Community College District about LeRodrick Terry, who was then vice president of student affairs.

An outside report substantiated at least six women’s claims of misconduct in the workplace while working in his department. That includes staring and leering at women’s bodies, making sexual comments to female co-workers and touching them inappropriately.

District spokesman Matt Hasson said the investigation into Terry has been resolved after a thorough review.

“When allegations were brought to the attention of the chancellor, she immediately ordered an investigation into all allegations,” Hasson said.

Hasson said there are multiple investigations into Rio Salado.

“The third investigation is to better understand whether the college leadership responded appropriately to allegations of sexual harassment when they became known,” Hasson said.

Terry, who has denied the allegations, was put on paid leave in February and then brought back and moved to work on special projects within the district in April until his employment ends June 30.

Terry began working at Rio Salado College in July 2015, and when he was put on paid leave made a yearly salary of $137,638. As vice president of student affairs, according to Terry’s biography online, he was in charge of student development, financial aid and testing. That also includes Title IX supervision. Title IX is a federal law prohibiting discrimination or mistreatment based on sex and gender.

The investigator found that after the Rio Salado President Chris Bustamante spoke to Terry about his inappropriate behavior in March 2017, it didn’t change. The investigation also found that many of the women in the report did not initially go to human resources because they were afraid of retaliation from within the department.

One woman KJZZ spoke to whose claims in the report were substantiated and asked to remain anonymous for fear of retribution said she felt the way the claims were handled perpetuated a hostile workplace culture.

An excerpt from the report.

“It’s been hard to work every day knowing what’s been going on [in the months of the investigation],” she said over the phone.

Another woman KJZZ spoke to whose claims in the report were also substantiated and asked to remain anonymous said the months-long investigation was “emotional hell.” She felt like college leadership wasn’t doing enough to help the alleged victims.

In a written note to KJZZ, she questions why it took her so long to report her complaints to an official body at the college.

“I was scared,” she wrote in a text. “Does that make me a coward or is not saying something part of a social construct? It was a full female existential crisis for me.”

One account found two people confirmed an allegation that Terry touched a co-worker’s breast as he walked by in 2017 at a work event.

Another found inconsistencies with Terry’s version of an allegation that he groped a co-worker while they were taking a photo together.

Other allegations include not just co-workers but at least one student worker who did not officially report an allegation of unwanted attention and comments about her looks, specifically calling her “pretty” and telling her she “had a nice body.”

An excerpt of the report's findings.

While on leave, Terry was on a list of potential candidates for a community college president position in Florida. He did not make the next round, according to the Orlando Sentinel newspaper.