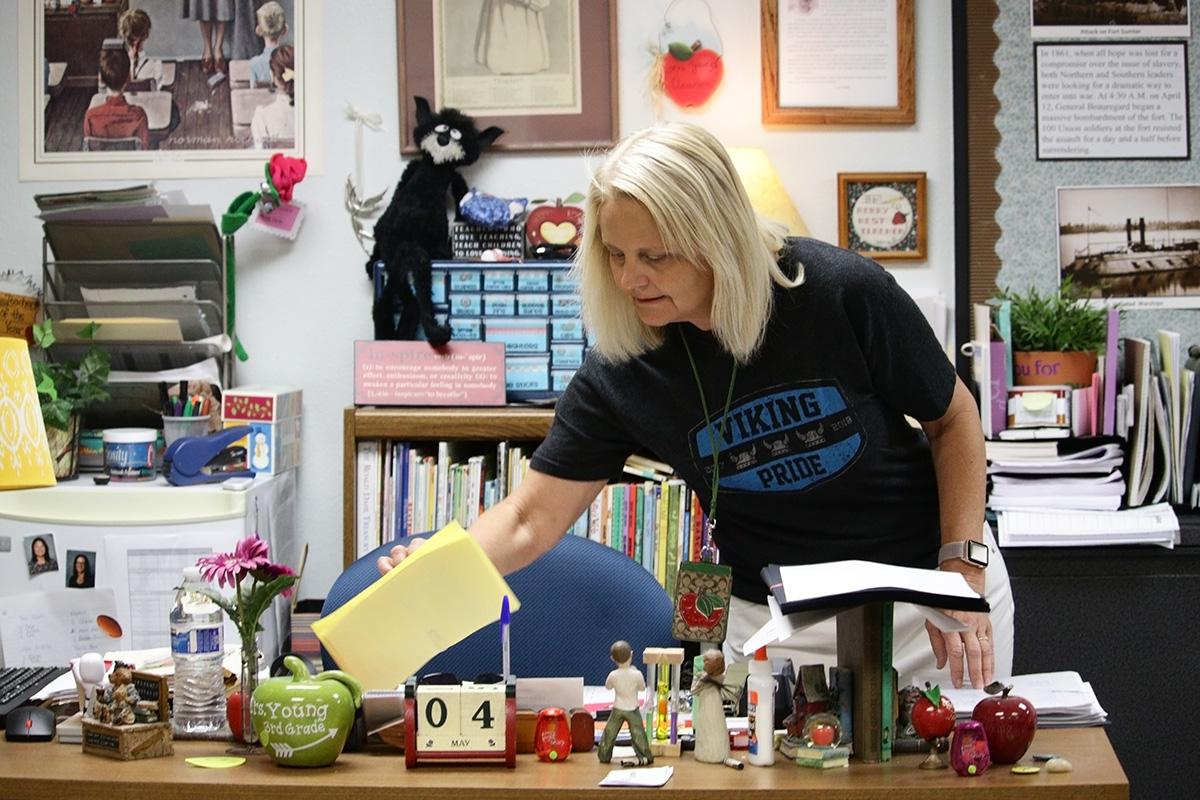 Hundreds of Valley teachers welcomed their students back into the classroom Friday after a week of closures when educators across the state walked out to demand the legislature restore education funding to pre-recession levels.

At 7:45 a.m. yellow school buses rolled up to the curb at Gilbert’s Val Vista Lakes Elementary.

“It’s showtime,” said third grade teacher Danita Young before walking out to greet her students for the first time in a week.

“Welcome back,” she said each time she opened a car door. One student hands her a card. Inside is a thank-you note, a Starbucks gift card and a red-and-white friendship bracelet. “So sweet, thank you.”

“I’m so thankful for all the teachers and the staff,” said parent Jodi Freedman. “We have the most amazing community.”

‘A Proud Moment Of Unity’

For the last week, Young was one of thousands of people who marched on Arizona’s Capitol demanding more money for teacher funding.

“I was skeptical that anybody would show up,” Young said. She’s taught in Gilbert for 34 years and never imagined the state’s far-flung teachers could organize in a movement like #RedForEd, thought to be the country’s largest walkout in 2018.

“It was a proud moment of unity,” Young said. 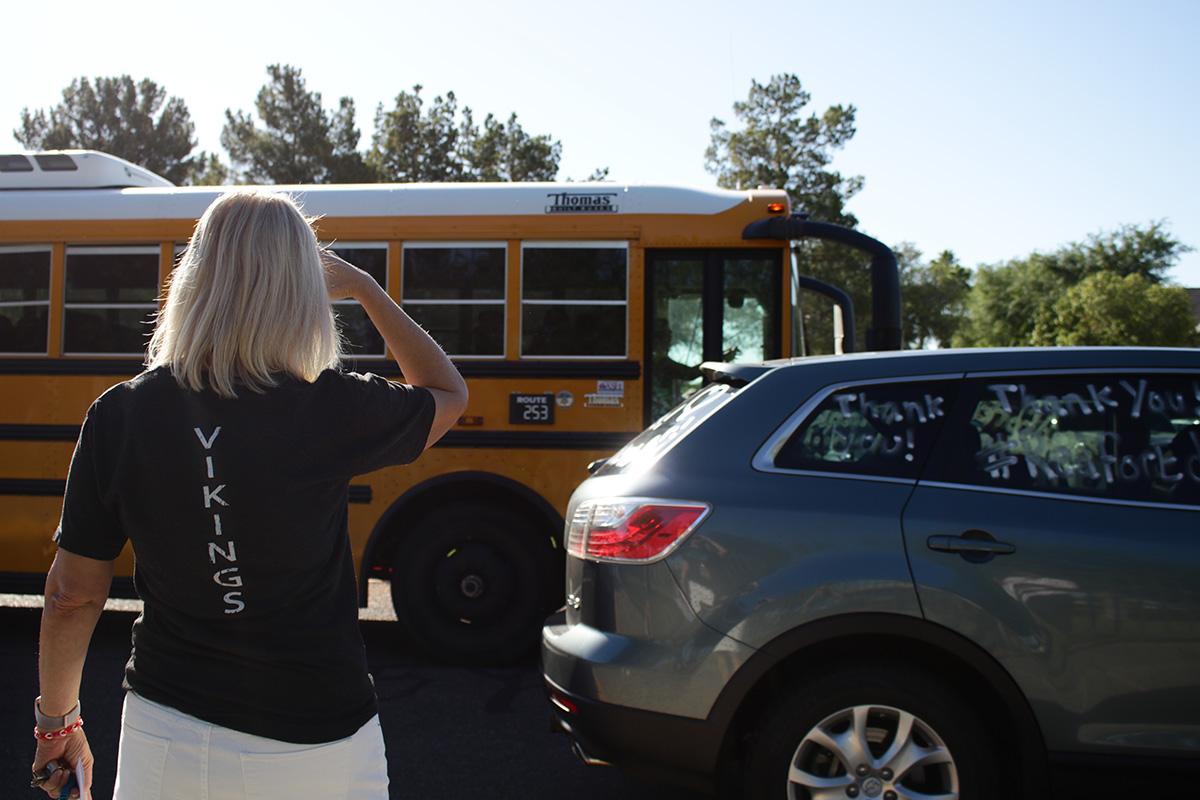 Jackie Hai/KJZZ
Young waits outside to welcome students back to Val Vista Lakes Elementary; a parent's car is decorated with messages of support.

“It’s not fair for me to get a raise and for my reading specialists for my reading coach, people that are so important to the running of the school, not get anything,” Young said.

Local school boards will have to decide in the coming months how to distribute the additional funding from the state, there is no requirement it go directly to teacher salaries.

Young said participating in the walkout was a real-life civics lesson.

“I hope there’s more of an awareness with the voters, myself included,” Young said.  “I’ve been known to vote a party line and perhaps I wasn’t as wise in my choices.”

She said there is more work to be done in the future.

“This is how we do things in our society,” Young said. “And it works. It may not work immediately, but it works.”

‘A Community Of Learners’

All 25 of Young’s students are in their desks by the time the final bell rings at 8:13 a.m.

They start on a worksheet of math problems.

“My fingers are crossed that it’s like a honeymoon and they’re ready to get back at it,” Young said.

She’s had to rearrange her curriculum to make up for the missed days. Today, they’ll go over fairy tales, the Civil War, the human body, catch up on their reading groups and celebrate learning multiplication with a special potluck taco lunch.

Young said her husband’s career as a scientist is one reason she’s been able to teach for more than three decades, but the career is also a part of her identity.

“I love watching somebody struggle with something and then get it and their celebration,” Young said. “We’re a community of learners here. Me included.” 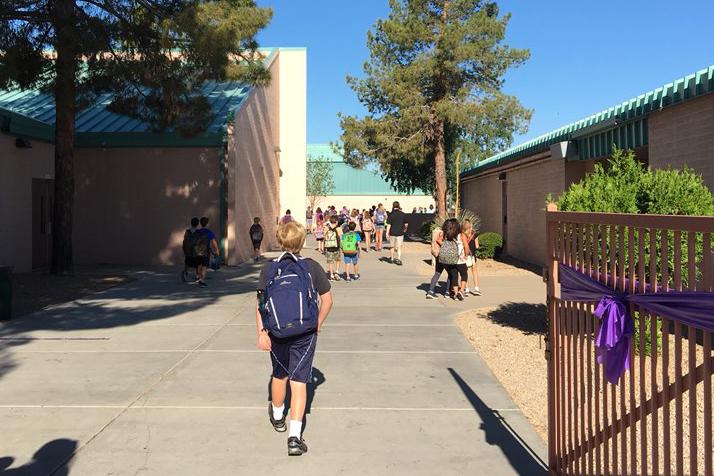 Casey Kuhn/KJZZ
Students head back to class at Oakwood Elementary in Peoria.

Third grade teacher Cindy Cordts and her students were more than happy to be back in the classroom at Oakwood Elementary Friday.

“How many are thrilled to be back?” she asked the class at 8 a.m.

But Oakwood parent Jill Beaumont was just glad the teachers were done striking. “I don’t agree with how they went about it, but I do think that funding needs to be done and they deserve more money,” she said.

Cordts couldn’t make it to march with her fellow teachers at the Capitol because of an injury, so she focused on school work during the closures. But that didn’t stop her voice being heard. 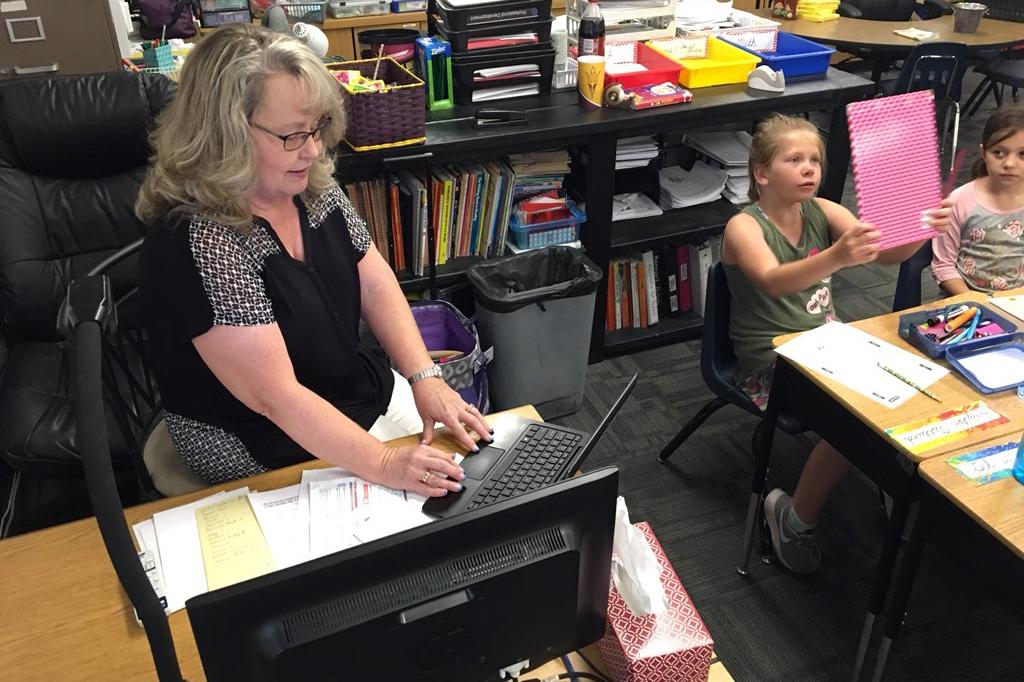 Casey Kuhn/KJZZ
Cindy Cordts, who has taught at Oakwood Elementary since it opened 33 years ago, said she is glad to be back.

“And then [I] wrote a letter to the Legislature and the governor each day.”

Cordts has taught at Oakwood Elementary School in Peoria since it opened 33 years ago. She even taught the Peoria school district’s spokesperson when she was in first grade.

Now, Cordts is happy to be back in class to teach her current third-graders.

“It’s very hard to put into words how excited I am to be back with my kiddos. I’ve missed them greatly, and we’re ready to finish the year strong,” she said.

Peoria district officials are still determining how they’ll make up the lost days.

And the students had prepared a written statement for the press in the form of a big poster board reading Mrs. Cordts “is an amazing third grade math teacher.”

She said her students were excited to jump back into learning and she felt proud to be in the classroom again.

“It just reminded me that I’m 100 percent in the correct profession and that these kids deserve everything that educators have been fighting for,” Jones said.

Jones doesn’t consider herself a political person, but plans to dig deeper into the voting process and government in her lessons and in her personal life.

“That’s really your only way to have your voice be heard,” Jones said.

MORE: The Show: Arizona Teachers Reflect On Heading Back to Their Classrooms

Teachers for those six days were activists, advocates and fighters for what they saw as a legislature failing their schools and their students.

Now, heading back to the classroom after the rallies can feel surreal, said Phoenix North High School teacher Rebecca Peiffer.

In an email, Peiffer said she stayed at the Senate overnight until Thursday morning when legislators finalized the budget.

"It also is tough transitioning away from the activism scene and re-focusing my energy on teaching," Peiffer said in an email. "But this is a job that I really try to put 100% into, so coming back from such a moving and powerful moment in Arizona history, it's going to be a matter of re-focusing my energy."