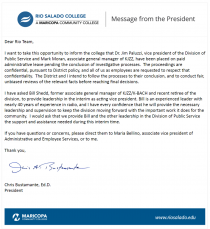 Two senior managers have been placed on administrative leave by Rio Salado College.

Dr. Jim Paluzzi, the vice president for the division of public service at Rio Salado and Mark Moran, associate general manager for KJZZ news and editorial strategy, were placed on administrative leave Thursday.

Paluzzi joined the station in 2009 as general manager. Moran joined KJZZ in 1998.

According to a letter from Dr. Chris Bustamante, Rio Salado College president, sent to staff Thursday afternoon, "The District and I intend to follow the processes to their conclusion, and to conduct fair, unbiased reviews of the relevant facts before reaching final decisions.”

"The district’s going to review the results of the investigation. The individuals have an opportunity to respond to the allegations and findings. The process will be followed through and reviewed any questions they might have," said Matt Hasson, spokesman for the college district.

KJZZ is licensed to the Maricopa County Community College district.

KJZZ will continue to report on this matter as more verified information becomes available.