For six days, Arizona teachers came out early and often to the Capitol. They faced hot sun, huge crowds and tedium as the strike stretched on. One group came out every day to march along and create the #RedForEd soundtrack.

Go to any school sports event and in between plays you’ll hear modern pep-band classics.

Like Queen’s “We Will Rock You,” The White Stripe’s "Seven Nation Army" and arrangements of Twisted Sister’s “We’re Not Gonna Take It.”

That last one may be more apropros for a 10,000 teacher walkout.

Band teachers put down their batons and picked up their own instruments, marching to a different drum on the Capitol lawn with the #RedForEd movement.

Trumpets wailed on the lawn over tooting sousaphones and snappy snare drums.

The lyrics of “When The Saints Go Marching In” were retrofitted like this: 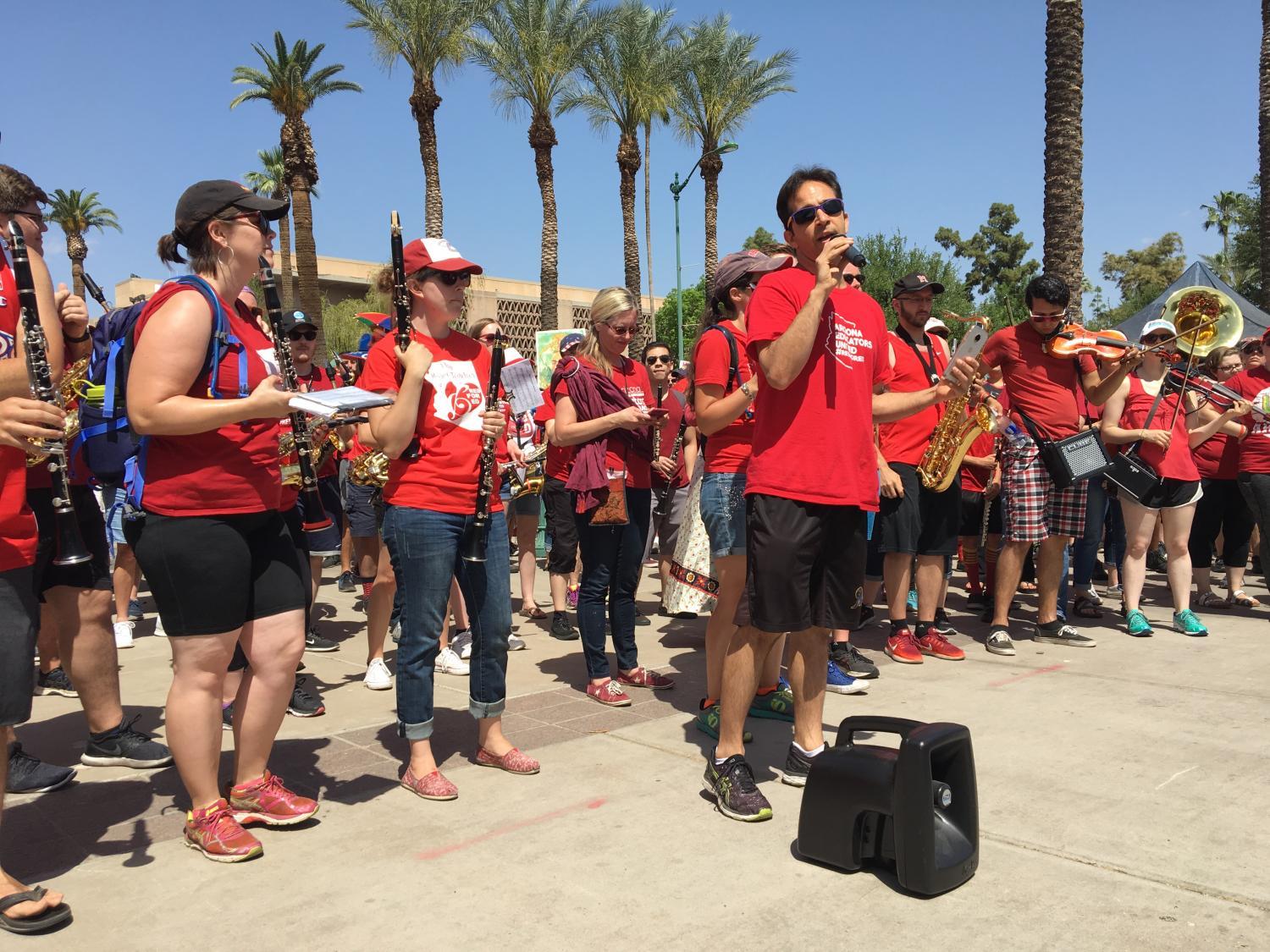 Casey Kuhn/KJZZ
Band members perform at the #RedForEd rally on May 1, 2018.

"When Red For Ed

When Red For Ed goes marching out,

How I want to be in my classroom,

When Red For Ed goes marching out."

“I thought when I posted that it would just be some friends of mine.”

Across the Valley, and social media, other music teachers had the same idea and the idea grew and grew.

“There are lots of people who joined who haven’t played an instrument in a really long time," Kalo said. "There are students, there are parents, there are music educators.”

The largest count, she said, was nearly 200 people. Piccolos pierced through the crowd, electric violins squealed over portable amps and a red color guard flag twirled through the air.

Some of the music arrangements came from the teacher walkout in Oklahoma.

“Every time we play 'We’re Not Gonna Take It,' it’s a little tip of the hat to the Oklahoma band because there’s another case of band is family,” Kalo said.

Band teaches discipline, working together and how to be a leader, Kalo said.

A perfect combination when it comes to rallying thousands of people who want to settle the score with a legislature that’s cut $1 billion in school funding.

Brian Wilson, a teacher from Mesa, wielded his red trombone in lieu of a picket sign.

“It gives us purpose," Wilson said. "We get up in the morning, we love teaching our kids and we love making music with our friends.”

Tempe teacher and piccolo player Alex Holste said one her students came when school was closed to play along.

“She was really inspired by the band so she came out with her stuff and she did everything with us all day,” Holste said.

One bass drum had a Martin Luther King Jr. quote written on it in black marker about neighbors risking themselves for the welfare of others.

Teachers like Joan Bucklew in the Osborn School District clapped as the band marched past after their last performance at noon.

“They’ve just been keeping everybody’s spirits up and the energy high and it’s exhausting being out here all day, really,” Bucklew said.

Those inside the Capitol could hear the blaring horns while budget talks continued.

Arizona teachers and organizers say they’ll keep fighting even if the budget is passed with more school funding. But it remains to be seen how that tune will play out.