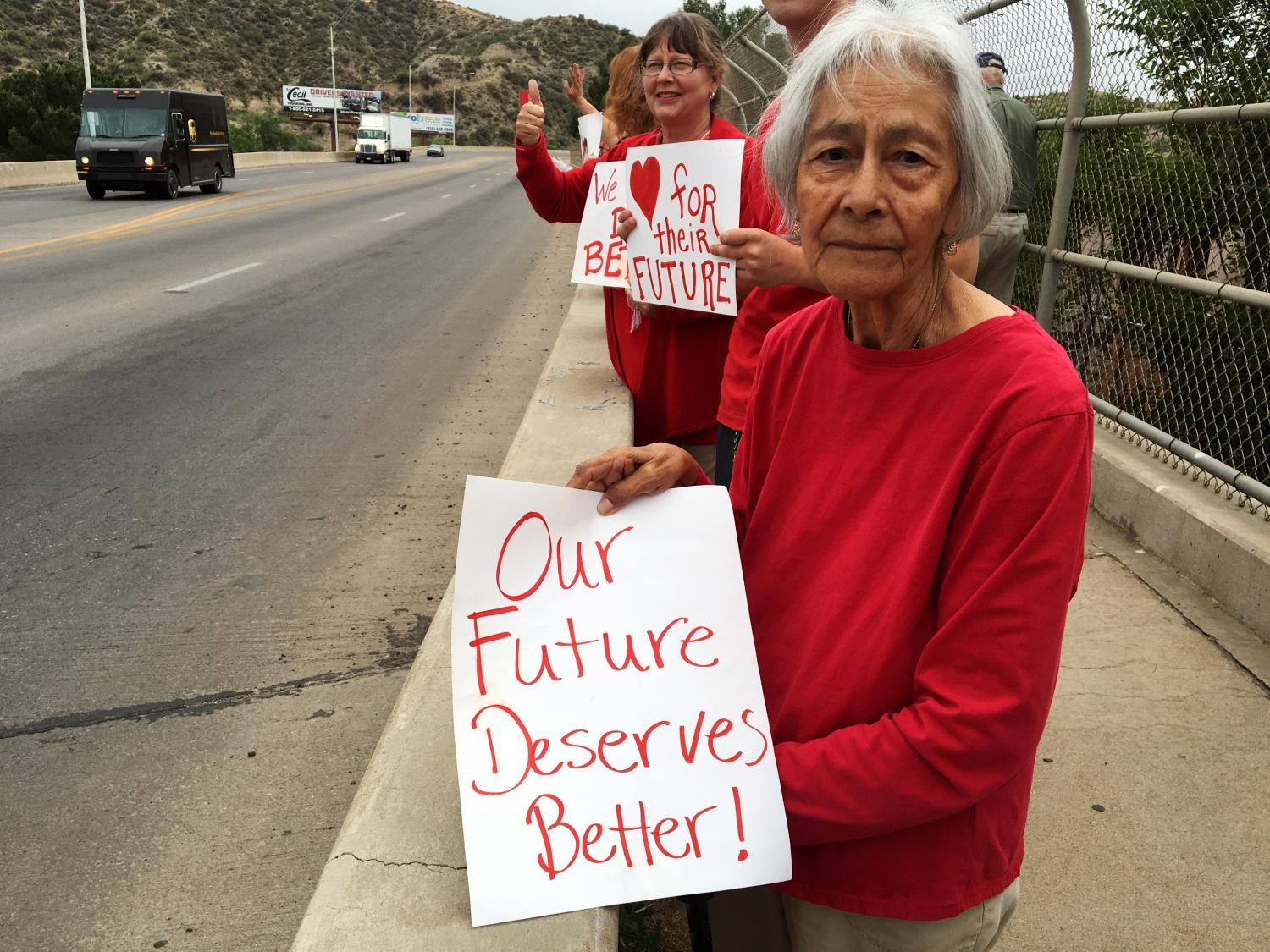 On Thursday, around 5 p.m., many teachers packed up to leave downtown Phoenix after the fourth day of a statewide walkout.

Almost a hundred miles east of the Capitol at the edge of a winding mountain highway, dozens of people dressed in red gathered on a highway overpass in time to catch the rush hour traffic.

Margret Celix held a cane in one hand and sign that said "our future deserves better" in the other.

Local educators organized the “stand out” as a way to show solidarity with their colleagues at the Capitol.

"Oftentimes, being a smaller area we feel like maybe we get forgotten in the hustle and bustle of big city life, but seeing our community come together and have such a loud voice and have so much support is just awesome,” said first grade teacher Erika Flores.

The Globe Unified School District closed for the first day of the teacher walkout, but has since remained open.

Most larger districts in the state closed affecting an estimated 850,000 kids.

Between 43 and 61 percent of students at each of Globe’s three schools qualify for a free or reduced price lunch. The district also struggles with academic performance as all three schools received D letter grades from the state this year.

Staff estimates about one-third of their students come from the nearby San Carlos Apache Reservation.

“They rely on school as a place to be comfortable, to be fed, to feel like they are taken care of,” Flores said. Knowing that, teachers and administrators committed to keeping their schools open.

'We’ve strapped and skimped and we try to get by' 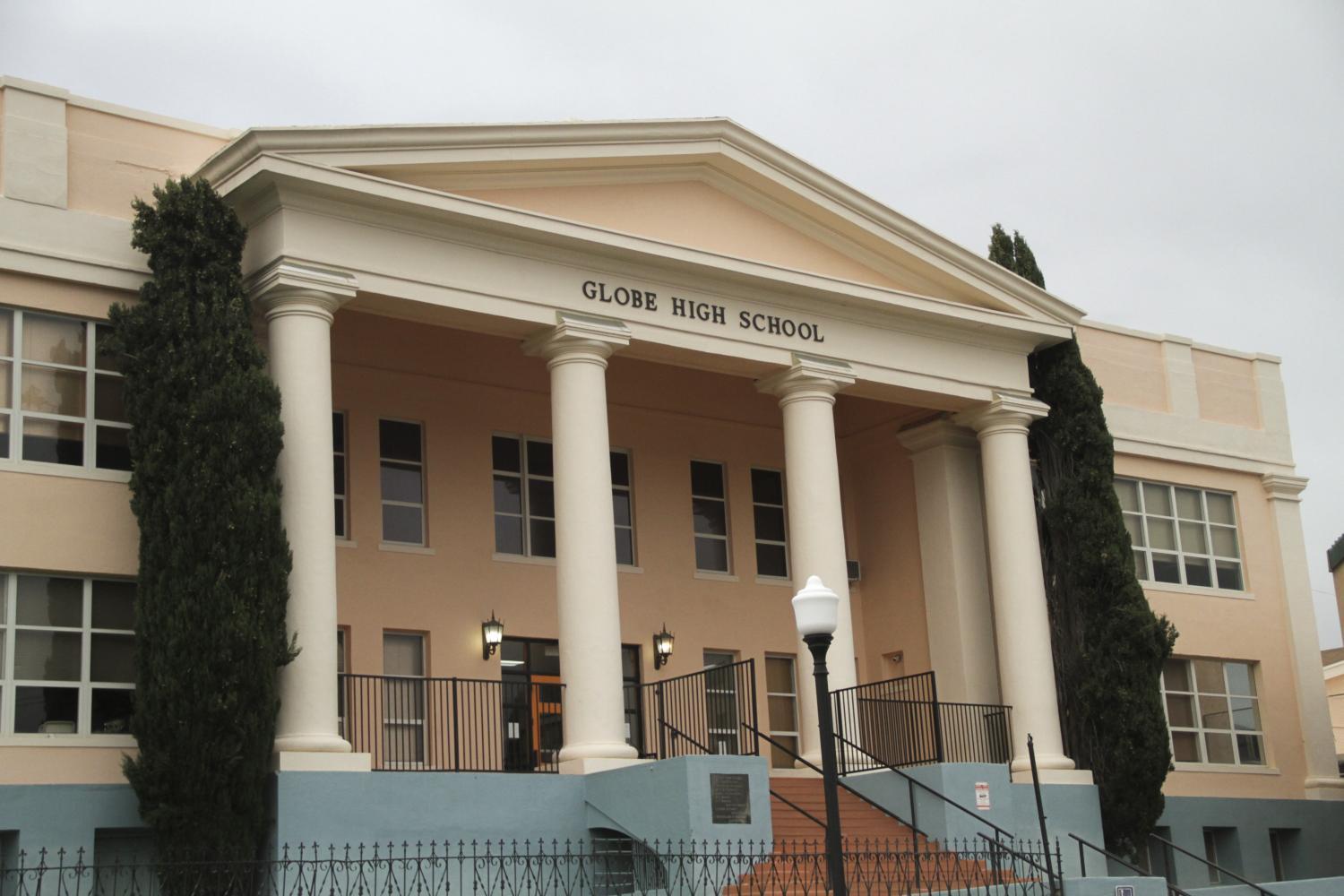 Mariana Dale/KJZZ
Globe High School was built in 1914 and is one of the oldest high schools in the state.

Globe was born as a mining camp in the late 19th century — heaps of mine tailings are visible from the highway. Now about 9,000 people live between the city and the nearby town of Miami.

Globe High School was built in 1914 and is one of the oldest high schools in the state. One teacher we spoke to said the school had to close briefly last year when the air conditioning broke. Despite it's age, the building is seen as a cherished staple of the community.

“Our community loves it. It’s majestic, it’s got the white pillars in front of it, but its very difficult to maintain,” said Jerry Jennex, Globe schools superintendent. “Our gymnasium for example was built in 1947 so that’s much newer.”

The money his district gets for building repairs, called capital or district additional assistance, was $1.4 million in fiscal year 2008.

Arizona Governor Doug Ducey says he’s working to restore some of that funding.

“We’re conservative and try to live within our means,” Jennex said. “We’ve strapped and skimped and we try to get by.”

Unlike most of Arizona, schools here are only open four days a week. Jennex says that’s part of the reason the district has been able to give modest teacher raises every year.

This year, before Ducey’s "20x2020" plan was announced, the district promised its teachers an additional $100 in every paycheck, adding up to $2600 a year, or a 5 percent raise for some.

“It’s good for kids to have strong veteran teachers who are able to make a living wage and aren’t so discouraged they’ve got to leave the field,”  Jennex said.

District has given modest raises tied to additional work days every year for the last five years. Jennex estimated the average salary is in the $42,000 range.

“I don’t know that we’ll always be able to compete with all the Valley schools, but we want to see it growing,” Jennex said.

‘I feel so empowered’

The demonstrators on the freeway overpass ranged from school staff to community members.

Margret Celix grew up in a nearby farming community and says school was a priority.

“My own parents emphasized that we needed an education because they came from Mexico and were basically illiterate,” Celix said.

Celix herself completed her bachelor’s degree in business management after having a few children of her own. She said all seven of her children have some college education — one is a social worker and another is a teacher.

Celix said she left the nearby Miami school district after going without a raise for seven years.

Carol Covington tied red bandannas to the handles of two clipboards turned rally signs. She’s driven a school bus for 26 years and says she takes home $17 an hour, but also furnishes her own insurance.

“We’re kind of the forgotten group,” Covington said. “Teachers need raises, but also the people who get the kids to school and back again.”

She said she’s also worked as a custodian, cafeteria worker and teacher’s aide.

“We need to band together and we need to stick together,” Covington said. “Quite pleasantly surprised by all the people that have marched.”

Geri Gardea teaches kindergarten and has been an educator in Globe for 28 years. Her husband, Ed, is in the midst of his first year teaching after a lifetime of working at the family shoe store.

“He says ‘oh  now I know what you’re talking about when you say you’re tired when you come home from work,” Geri said.

But working with kids is also rewarding.

“You just give them that little lift up to start blossoming,” Gardea said.

While her husband is new to the job, Geri said the issues that have come to the forefront — teacher pay, class sizes and per-pupil funding — have been simmering for a decade.

“I feel so empowered right now, that I just really hope this all works out for the best,” Gardea said.

Misty Plant sat in the bleachers watching her daughter play catcher. She’s heard about the #RedForEd movement and she supports it.

Daniel Aguero leaned on the tailgate of a truck while watching his brother in the outfield.

“They do a lot of education just to be able to teach and they deserve every bit of what they want money-wise,” Aguero said.

Little League is one of few extracurricular activities for kids in the area, and the woman who helps keep the league going is also a teacher.

Mariana Dale/KJZZ
When Sandra Rodriguez (right) isn't teaching 5th grade, you're likely to find her near a baseball field. She is a 28-year volunteer, now President of Pinal Mountain Little League. Her daughter Ashley Lopez (left) also works as a reading specialist.

Rodriguez raised her own kids before going back to school to become a teacher when she was 40 years old. She now teaches 5th grade at Copper Rim Elementary teacher.

“It’s very very rewarding, not monetarily, but I have great, great kids,” Rodriguez said. "I like to think that I make an impact on them.”

She said a shrinking budget has changed how teachers educate kids at her school — there’s no dedicated art or music classes, a four-day school week and limited access to technology.

More than anything Rodriguez wants to see new money in her classroom or in the school’s 35-year-old bathrooms.

“Our kids deserve better, they really really do,” Rodriguez said.