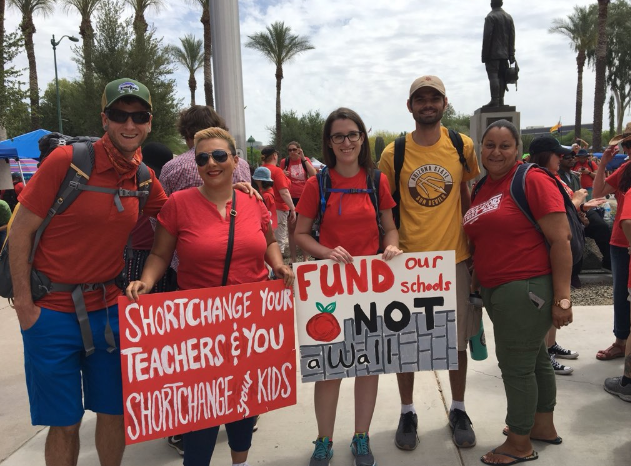 Casey Kuhn/KJZZ
Several charter school teachers from Phoenix Collegiate Academy in Phoenix at the Arizona Capitol on May 1, 2018.

The largest teacher walkout in Arizona history could be nearing an end. On Tuesday, leaders of the RedforEd movement announced that teachers would stop walking out if the state Legislature passes a budget that provides a significant raise for educators and new funding for schools.

Rebecca Garelli, a leader with Arizona Educators United, told demonstrators at the state Capitol it was time to get back to their classrooms and students.

“We need to continue the fight for the additional resources our students need,” she said.

The proposed state budget includes hundreds of millions of dollars in restored funding for education and a 9 percent boost in teacher pay next year.

Organizers say the fight will continue into November's elections.

KJZZ’s Will Stone was live at the Capitol, where teachers gathered again for the fifth weekday in a row.

“The mood is still very vibrant, very energetic,” Stone said. “There are hundreds of people out here and you would never really know that it's in its fifth day.

“People are lined up to get into the House of Representatives and Senate to make their presence known.”

Stone said he had spoken to teachers who indicated this likely would be the last day of the walkout.

“Many have had communications from their schools that school will reopen tomorrow,” Stone said. “Hopefully this is somewhat contingent on whether the Legislature passes a budget.”

Some said they were not satisfied by the legislative results.

“Generally what I'm hearing is that there is a recognition they have not received all they wanted to in terms of demands to raise education funding,” Stone said, adding that the movement “galvanized and really connected teachers in the state in a way that they have not seen before.”

Stone reported that many teachers said they were disappointed but considered the pat week’s protests a good start.

“But a lot of them say this is really just the beginning because for once we have this huge outpouring of support and they really feel that the public and parents are still on their side in terms of understanding the need for more funding,” Stone said. “Yes, this has been inconvenient for parents and lots of people but that a little bit of inconvenience is necessary to make their voices heard even if the Legislature seems like it may not go along with all that they've asked for.”

The demonstration amounted to a large civics lesson for some, Stone said.

“I had one teacher tell me that she comes here every year with her students for a field trip and they learn a bit about the legislative process, but she's going to take these lessons and really actually impart them towards students so they understand what has been going on and that it's not just a bunch of teachers leaving school that they really are fighting for them,” Stone said.

Many teachers plan to wear their RedforEd t-shirts when they return to school Thursday.

“There's a lot of talk about ballot measures, a lot of talk about coming out very strong in the election. And I've had several teachers ... realize now coming down here watching lawmakers not necessarily going along with their demands. They know who supports them and who doesn't support them and that they will make sure to have that reflected come November,” Stone added.

KJZZ’s Will Stone reported there were a lot of teachers playing band instruments on the Capitol mall.

“We have bands out here, lots of people with tents, and many of the teachers filed into the Senate and House of Representatives chambers to have their presence be seen by the lawmakers who are in there right now looking over the budget,” he said. “The overwhelming message was that . . . this is only the first step and that we will be back whether that is through a ballot measure or in the election.”

Many teachers said they had never been politically engaged like they have during this movement.

“And that for the first time they're really going to be out there campaigning, handing out flyers and becoming politically involved,” Stone said. “I talked to a number of people including some teachers who are retired and others who have been teaching for 20 30 years and say they have never seen anything like this.”

Stone said teachers now believe they're a force to be reckoned with and that lawmakers seemed to understand that.

KJZZ’s Casey Kuhn has been covering the walkout when it was a walk-in at schools around the state.

“It does feel like a strange sense of ending – like, it just started and now it’s over – and as a reporter the adrenaline and excitement of covering breaking news while meeting all these really dedicated people is what kind of keeps you going,” she said.

Kuhn said most people she spoke to were passionate and told her they have been inspired.

“They feel like they’ve been living with the status quo of little funding in their classrooms, and the most they could do is complain to each other,” she said. “Now, everyone is listening.

“Now they’re using their collective voice to go to the Capitol during a school day, to get up and say, we’re upset, we’ve been upset, and you deserve to hear it – that’s to lawmakers.”

She also spoke to Sara Barker, a school bus driver for special education students in the Gilbert Public School district for the past 17 years. Barker said the district lost two certified bus drivers this year because charter schools nearby pay hundreds of dollars more a week.

Kuhn said one of the interesting aspects to the RedforEd movement was the democratic move to vote on the strike followed by the unilateral decision at the top to end it.

“Both choices garnered mixed reactions but when you have so many people involved, it’s bound to happen anyway,” Kuhn said.

She added that it would be a great time to look at states like West Virginia and Oklahoma that started the teacher movement to see what is happening now.

“There are people who were in that (Oklahoma) movement who have decided to run for the state Legislature there,” Kuhn said.

In Arizona, backers of a ballot initiative that would raise income taxes on the wealthiest residents are gathering signatures at the Capitol and elsewhere. They need to collect more than 150,000 signatures in the next few months.

“That’s for a tax on the top one percent of earners in Arizona to help fund schools. That’s now been backed by the teacher union and the Educators United grassroots group,” Kuhn explained.

She described the decision to end the walkout now as a tactical one.

“If you’re playing poker and you’re up, it’s a decision to quit while you’re ahead or keep going and possibly lose it all. And here that could mean public support – either way, if teachers go back to work tomorrow, it’s time to look to November,” she said.