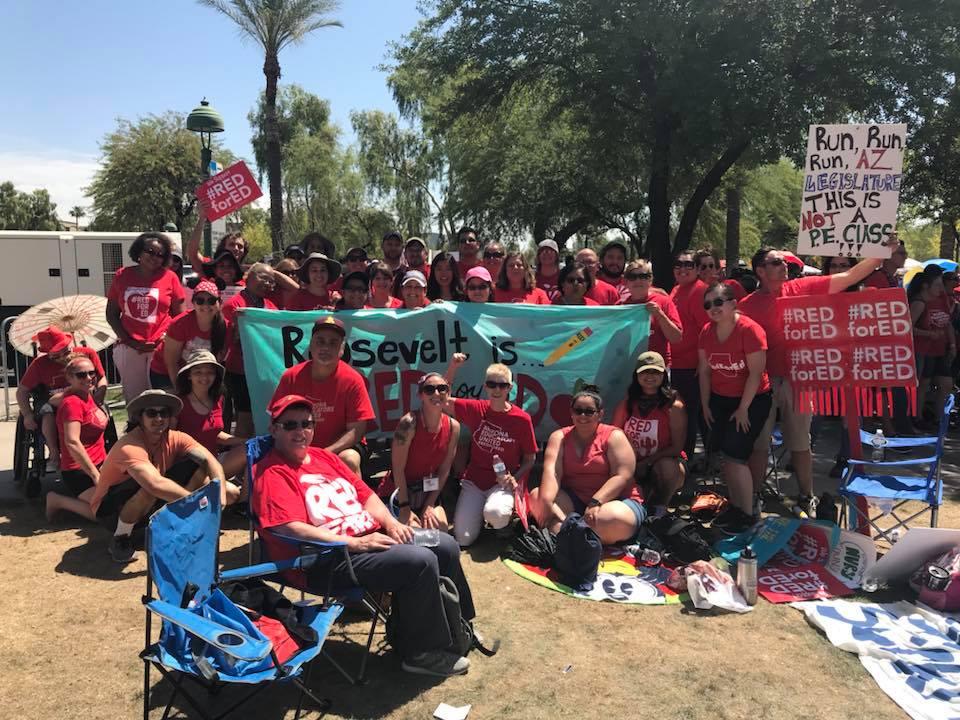 The teacher walkout is on its third day in Arizona. And it’s hard to drive anywhere here right now without seeing #RedForEd written on a car window or on a sign. It’s that community support that teachers have built together as they fight for more pay and to restore $1 billion to public education. For two south Phoenix districts, constant money woes have compounded the teachers' frustration.

Kids play tug of war and run around a multi color parachute. Teachers and aides in red shirts lead the students around Jack Kuban Elementary School in south Phoenix — it was the day before school closed for the teacher walkouts last week

“We hope it’s not that long, we hope the governor and legislature develop plans for sustainable funding," said Mary Fazio.

Fazio has been with Murphy School District for more than 35 years. She’s a reading interventionist and said teacher retention is a huge problem for the district.

“So it’s probably 30-40 percent of our staff is a turnover every year,” Fazio said.

Fazio is the head of the Murphy Education Association.

Recently, the school board considered a 5 percent pay decrease for all staff in the face of what was then expected to be a $2 million budget shortfall. The board ultimately voted not to dock salaries, after teachers and parents showed up in droves to public meetings.

Fazio said not only is it hard to find someone to fill teacher positions, it’s even harder to find certified teachers.

“You can’t just say alright now we’re just going to change qualifications because we don’t have enough teachers. Maybe change the pay and you would get qualified people.”

Gov. Doug Ducey last year signed a law letting anyone become a teacher if they have a bachelor’s degree and a background check.

Nancy Schwartz is a lead librarian and head of Roosevelt Education Association.

“There’s so much good going on in Roosevelt we have to do so much more to make up for the bad image that’s already there," said Schwartz.

The bad image comes from overspending its budget by $4.4 million in two years. That led to cutting positions in administration.

The undercurrent of frustration, Schwartz said, has been years in the making at Roosevelt, not just the few weeks it took to organize a teacher walkout.

When enrollment drops, teacher positions are cut, and classes get grouped together, meaning bigger classes and fewer teachers. Schwartz said it can be hard to organize teachers and staff for this kind of action because of the turnover.

Michelle Campuzano is in her last year as a certified special education teacher at Ignacio Conchos School.

“I can’t be a single mom and a teacher," Campuzano said. "Every year the demands get higher and higher, the pay gets less, the resources are diminishing and it’s just a burden I can’t bear.”

Campuzano has a special needs son and said the extra hours spent getting supplies for her classroom, with her own money and caring for him became too much.

“I have to pack up my son and his wheelchair and go to the store and pack up and do that over and over and that’s what we do on our weekends. I’m tired. I’m exhausted.”

Campuzano said she wants to empower Roosevelt parents to ask for what their kids need. But, it’s not easy to walk away from her vulnerable students after this year.

Campuzano said she’s seen parents come out to Roosevelt school board meetings when they never have before. And she thinks that’s what the #RedForEd movement is all about: teachers, parents and the community banding together to demand a better future for their children.