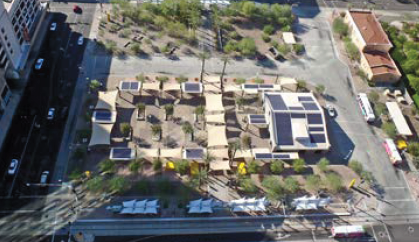 It’s arguably one of the most valuable pieces of land in downtown Phoenix — and it’s going on the market.

The Central Station Transit Center is the primary transfer point for buses and light trail — and a key development site. Located along Van Buren between Central and First avenues, the parcel was appraised $12,286,000 in October 2017.

The Phoenix City Council recently gave approval for staff to issue a request for proposals (RFP). The goal is to see a developer enhance the transit center while adding a dense, mixed-use project.

Four years ago, a developer pitched a high-rise apartment complex, but the plan fell through. Since then, Phoenix says there’s been significant interest in developing the 2.6 acres.

According to a city report, the RFP will include expanding the transit facility to accommodate ticket vending and sales, customer service, security, restroom and storage.