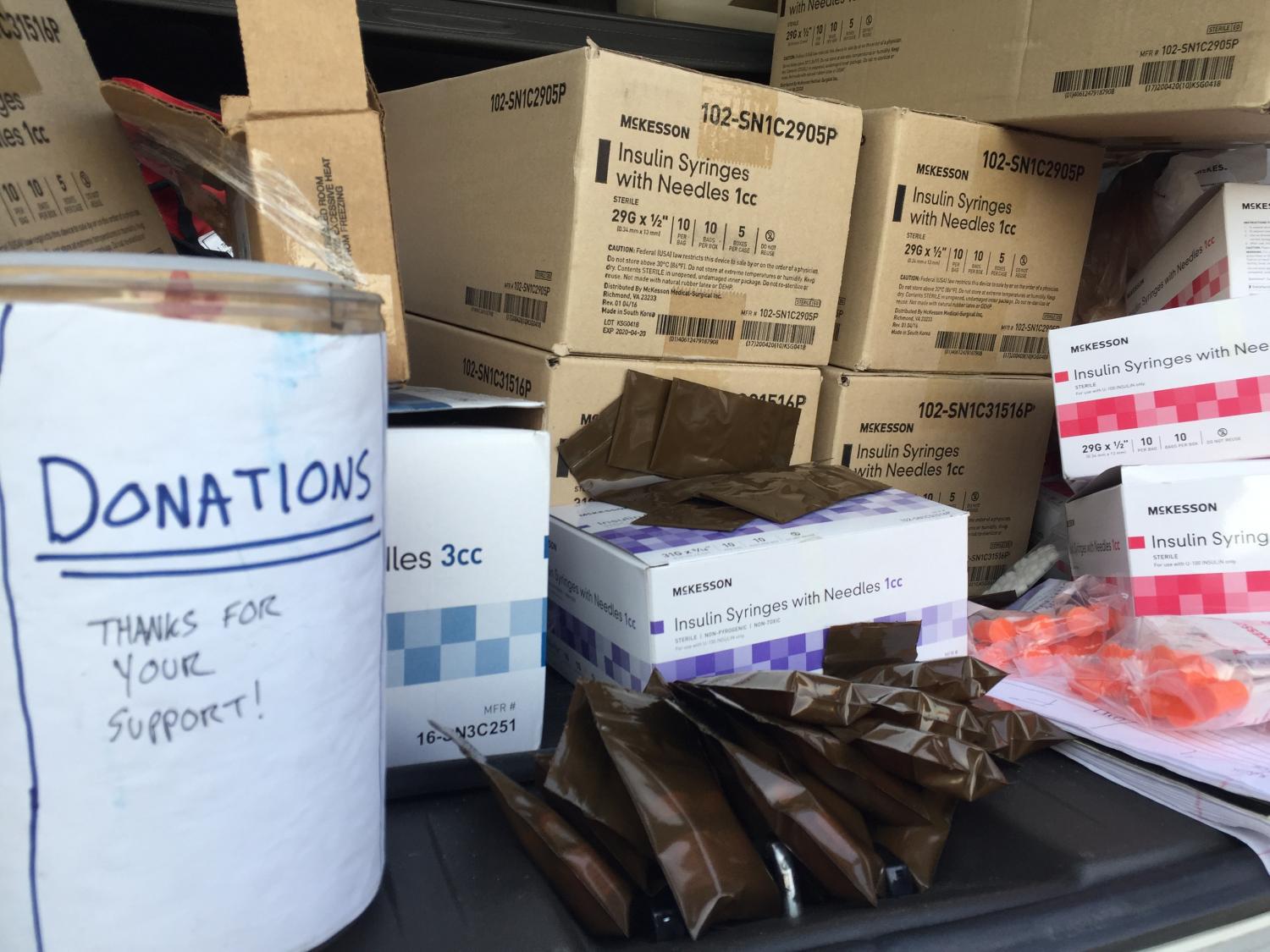 Despite early support from lawmakers, a bill that would legalize needle exchanges has stalled in the Arizona Legislature.

Proponents now worry the bill may die in the waning days of the legislative session, or — even worse — that a revised version could actually derail efforts to curb Arizona’s opioid epidemic.

While Arizona law doesn’t explicitly forbid syringe exchange programs, distributing needles for illegal drug use remains a felony. That has forced most needle exchanges in the state to operate under the radar and at the discretion of local law enforcement.

In February, House Bill 2389 passed the House with unanimous support. The original bill, sponsored by Republican Rep. Tony Rivero of Peoria, would let IV drug users exchange dirty needles for clean ones without fear of arrest.

But the bill was amended in the Senate.

“The amendment made in the Senate basically nullifies the bill,” said Haley Coles, executive director of Sonoran Prevention Works.

The amendment introduced in the Senate requires the director of the Arizona Department of Health Services to first declare a public health emergency because of a possible infectious-disease outbreak before a syringe exchange program can open up in a community.

“That’s socially and fiscally irresponsible,” Coles said. “That’s exactly what we are trying to avoid. We should not have to wait for an outbreak to occur.”

In parts of the state, some public health workers already worry about climbing rates of hepatitis C due to IV drug use. Mohave County has been identified as one of the most vulnerable places in the country to a rapid outbreak of HIV like the one seen in rural Indiana several years ago.

Coles said the amended bill might actually backfire. Putting specific requirements for needle exchanges into law could shut down the few existing programs in the state. Her organization and the Kingman Police Department are scheduled to open up a syringe access program later this month.

“The legislation was crafted according to an evidence-based and proven approach,” Kingman Police Chief Robert DeVries said. “Anytime you begin to make alterations, you take away from the integrity of the program. I have concerns about how far it is being changed.”

The bill’s sponsor, Rivero, has the same fear about the Senate’s version of the bill.

“I don’t think it accomplishes anything,” he said.

Rivero said he was surprised the bill underwent such major changes after passing the House with support from “very conservative to very liberal members.”

“The citizens of Arizona recognize we have a problem here,” Rivero said. “They believe one of the solutions to address the problem of drug usage and the spreading of diseases via dirty needles is by having this type of program.”

Rivero said he is still hopeful the bill can pass the House and Senate in its original form, but has no indication yet from Gov. Doug Ducey on whether he would sign it into law.

Syringe-exchange programs reduce the spread of infectious diseases, don’t promote drug use and increase the chance an IV drug user will actually seek out treatment, according to the U.S. Centers for Disease Control and Prevention.

More than 1,100 people in Arizona are believed to have died from opioid overdoses since mid-June. Heroin now appears almost as much as oxycodone in those who overdosed, according to state figures.

But the increase in IV drug use hasn’t convinced some Arizona lawmakers.

State Sen. Warren Petersen, a Republican from Gilbert, voted against the amended version. Before doing so, he read an email from a constituent opposing the proposed law.

“All the talking heads pat each other on the back and feel wonderful as they try to help solve the problem. But the problem is not solved. It only increases the burden of substance abuse,” Petersen said on the Senate floor.

“Rather than solve a problem, it has made a whole class of people more dependent on the government,” he said.

The amended bill still passed the Senate with a supermajority. It’s now suspended in a conference committee until half a dozen lawmakers can reconcile the two versions. That was slated for last week, but then canceled.

State Sen. Kate Brophy McGee, a Republican from Phoenix, was then replaced with Petersen. Brophy McGee told KJZZ she supported the original bill.

It’s not clear when the committee will meet.

Testifying for the bill, Dave Cooke of Scottsdale told lawmakers his son, a recovering heroin user, almost died from an infection after using a dirty needle.

“They sliced his arm from elbow to wrist to remove the infection,” Cooke said. “If we didn’t get him to the hospital at the time we did, he would have died. They rushed him right into surgery.”

The push to legalize syringe exchanges comes in the wake of a special session, called by Gov. Ducey, which led to a host of news rules on opioid prescribing and set aside millions of dollars in funding for treatment.

At the bill’s signing, Ducey praised lawmakers for banding together.

“I want to thank all of our legislators — this was a unanimous vote —  for putting party labels aside and getting this done,” Ducey said.

Much of the legislation was based on recommendations from the Arizona Department of Health Services’ “Opioid Action Plan.” Syringe exchanges were excluded from that report despite support from the treatment community.

Coles, the Sonoran Prevention Works director, said the Governor’s Office has worked with opponents in the Senate to sidetrack the bill.

“We haven’t been able to get a clear answer of why the Governor’s Office is so concerned about this bill,” Coles said.