Arizona Teachers Vote To Walk Out; Action Scheduled For April 26

Arizona teachers have voted to walk out, group organizers said Thursday night. This is the first ever strike called for teachers statewide.

The announcement came after three days of teachers voting in schools across the state.

The school tallies were sent to the teachers’ union and Arizona Educators United, the grassroots teacher group leading the #RedForEd movement, and tabulated.

There are about 60,000 teachers across the state and 57,000 teachers voted; 78 percent of them voted for the walkout.

“We have crumbling public school infrastructure here right now,” Karvelis said. “We have kids sitting in broken desks studying out of 25-year-old textbooks in a room with a leaky ceiling. And that’s unacceptable.”

The walkout is planned for next Thursday.

Karvelis said the #RedForEd movement has given a voice to teachers who have suffered the effects of education funding cuts for years.

Arizona Education Association president Joe Thomas says he’d rather meet with lawmakers to resolve the issues before a walkout happens next Thursday.

“The Legislature is still in session, so they can fix that in just a few days,” Thomas said about the funding problems. “And that’s what we’re calling on them to do by Thursday, is meet us at the demands. Give our students the schools they deserve.”

Still others felt like they didn’t know what they were really voting for whether it was support for a walkout now or in the future.

Thomas understands tension in what some teachers say was not enough transparency in the voting process.

“If there’s going to be any plan [teachers] are going be involved in, they’re going to want to know every single step of that,” Thomas said. “And so there is a tension around that and we understand that. But there’s some of these pieces that are preparatory that you don’t want to get out because it causes a larger panic than what you want, it can be misunderstood.”

Legally, some teachers face possible termination if they strike, as Arizona is a right-to-work state.

Karvelis said he hopes to avoid backlash through community outreach.

“I wouldn’t say I’m concerned,” Karvelis said. “I recognize that that’s a possibility for sure from some folks and part of what we need to do now is respond. The governor put this out and I think it was a politically savvy move because he said ‘here you go, you got your 20 percent.’”

Districts are still planning on what to do in the event of school closures.

The strike comes just a week after Gov. Doug Ducey announced a plan to raise average teacher salaries by 20 percent in 2020.

A 20 percent raise for all educators in schools was one demand from AEU. Another demand was no new tax cuts, and a restoration of K-12 education funding that had been cut during the Great Recession.

AEU and the teachers union both came out against the plan, saying it didn’t include non-teacher staff like counselors or cafeteria workers, and doesn’t adequately begin making up for lower school funding.

Ducey unveiled the so-called “20x2020” plan, which would take money from other budget areas like surplus funds, as well as anticipate economic prosperity that would put more money into Arizona coffers.

Public education groups like the Arizona PTA, Save Our Schools and Arizona School Board Association came out in support of Ducey’s budget plan.

When more details emerged about the strategy of paying for salary increases without raising taxes, both Arizona PTA and Save Our Schools switched their positions and now do not support the plan.

Teachers began organizing in Arizona after educators in West Virginia and Oklahoma walked out of schools demanding higher pay and better working conditions.

Both Arizona and Oklahoma have some of the lowest average teacher pay in the country, with both legislatures cutting deep into funds during the recession.

Teachers here are now demanding those cuts be restored, with no new tax breaks until that happens.

A rally at the state Capitol brought thousands of teachers to Phoenix, all in red, to garner support and get their demands heard. Following that, a state-wide "walk-in" occured in schools statewide, where teachers in public school districts and charter schools alike gathered before school. They held signs and protested the low pay before walking into their classrooms together in a show of solidarity.

Some teachers on social media are sharing images of decaying textbooks, broken desks and dirty rooms in their schools in Arizona.

School districts are now planning whether to close schools. 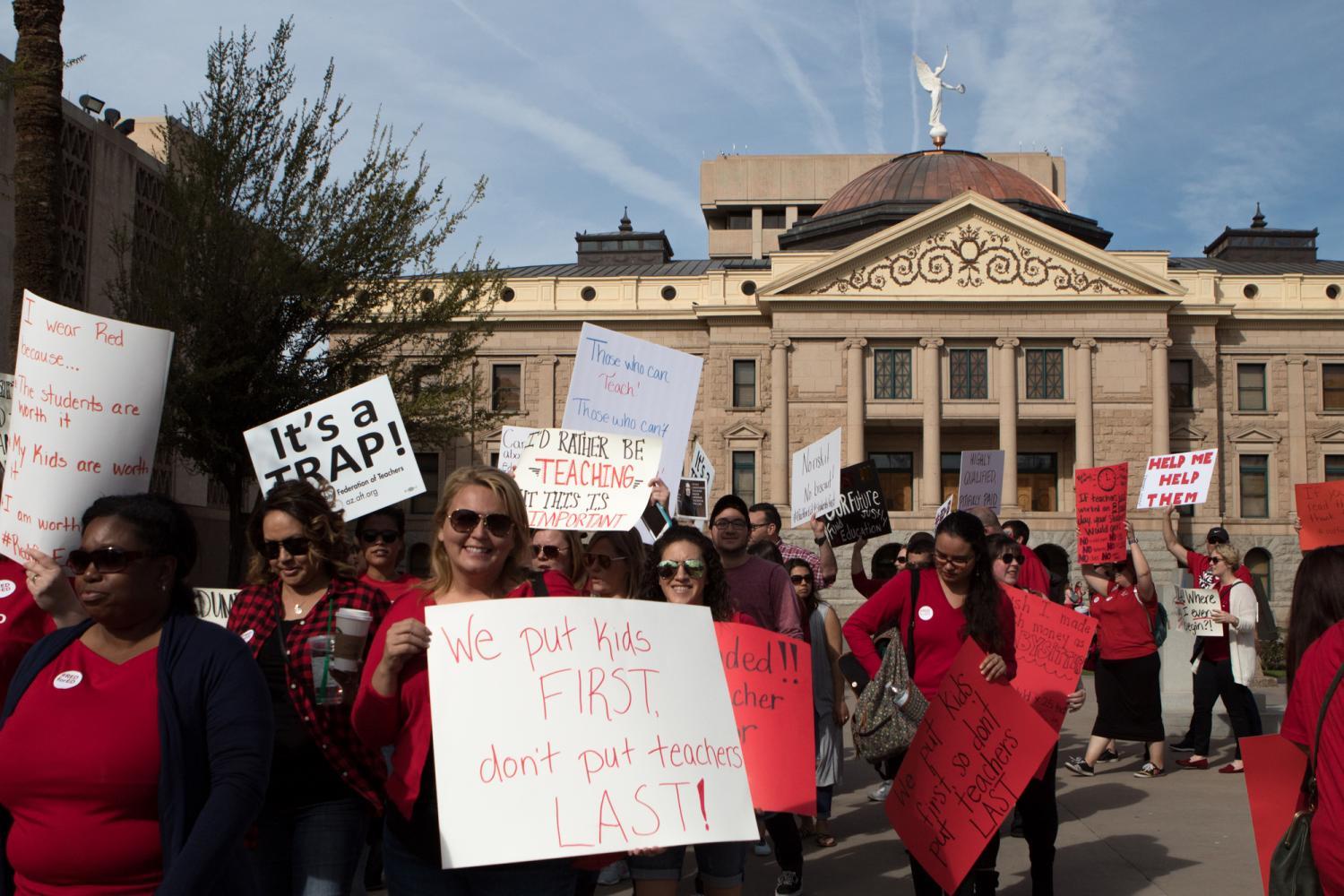 (Photo by Melina Zúniga - Cronkite News)
Arizona teachers march at the Capitol in Phoenix on March 21, 2018.