A Brief History Of Mudslinging 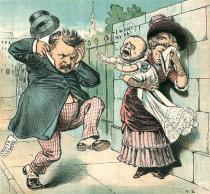 Now that the midterm elections are over with, one thing stood out about this year’s race: the number of negative campaign commercials flooding the airwaves.

The Founding Fathers engaged in mudslinging, often under pseudonyms. The seventh president, Andrew Jackson, was falsely accused of being a cannibal following a battle with Native Americans.

"Basically, he had asked one of his men to get a dozen of the bodies so he could have them for breakfast," said Kate Kenski of the University of Arizona’s School of Government. She says that attack was over the top. For this election, no one was accused of cannibalism, but there were still plenty of attack ads.

The morning after the Aug. 26 primary election, a political action committee accused Democrat Fred DuVal of raising the tuition at all three state universities while serving on the Board of Regents. Not surprising, DuVal aired his own ads, which took aim at Republican Doug Ducey’s record as a businessman.

Then there were the congressional ads — lots of them.

The fact is, political mudslinging is nothing new.

"It’s really part and parcel of American political tradition," said Dr. Jack August, a bioscience historian with the International Genomics Consortium. He said in the 19th and 20th centuries, political ads were laced with humor and irony. August points to President Grover Cleveland.

"It was discovered that he may or may not have fathered a child out of wedlock and there was a picture of him depicting a baby and a lady and the baby is crying saying, “Ma, ma, where’s my pa?” Well, it made the point, plus it was kind of humorous to Victorian America," August said.

But with the advent of radio and then television, the tone of the attack ads began to change.

And with the "daisy" ad, the first negative television ad was born. The target of that infamous commercial was Arizona icon and 1964 presidential candidate Barry Goldwater.

Fast forward 50 years. The media, the frequency of the ads and the money have changed the game.

"Now, it’s become a blood sport where winner-takes-all is the final goal and what benefits the body politic is a secondary concern…you gotta win," August said.

Kenski said one reason why campaigns employ messages like that is to solidify their already polarized base.

"We’re basically stoking the fires rather than trying have any kind of deliberative meaning come out of our campaigns," Kenski said.

That, and, according to Kenski, we’re wired to remember to the negative stuff more than the positive stuff.

You probably don’t remember the optimistic jingle which originally aired in 1960. It was intended to sell the public on then presidential candidate John F Kennedy.

But you probably do remember that Kennedy was a Roman Catholic, and at the time, that was a serious chink in his armor.

"That JFK would report to the Pope, that was kind of crazy, but that solidified Nixon’s base," August said. "That was a close election by the way. That was an effective way to go about it."

With the midterms behind us, the masses can enjoy a temporary reprieve from the nonstop attack ad. At least until we ramp up to the 2016 presidential election.