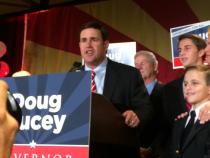 (Jude Joffe-Block/ KJZZ News)
Ducey thanked his campaign staff, his wife and three sons, and his opponent, Fred DuVal, who he called "a good man."

Arizona Treasurer Doug Ducey cruised to an easy win over Democrat Fred DuVal on Tuesday to become the next governor as voters chose to stick with the Republican Party for the top office as the state still struggles to bounce back from the Great Recession.

Ducey portrayed himself as the inevitable winner in the final weeks of the campaign, buoyed by heavy spending on his behalf by outside groups and strong Republican turnout in early voting. He emerged from a bruising six-way primary in August in the race to replace Gov. Jan Brewer and went on to outspend DuVal in the general election by a hefty margin.

The race was called fairly early in the night, and supporters cheered when Ducey took the stage. He told the crowd he plans to limit government's growth by limiting spending growth. He also said he plans to work on education reforms.

"I can tell you this: As governor, I will focus dollars on teachers teaching and students learning and never accept that there are losers in the classroom," he said. "Every child can learn, and every child should receive a quality education, and that's exactly what we are going to do."

Ducey takes office in January and will face a fiscal crisis caused by lower-than-expected tax revenue and a court order that could put Arizona on the hook for up to $2.5 billion in new education spending. The state faces a projected deficit of $1.5 billion in the current and next budget years amid promises from both candidates to cut taxes.

Ducey thanked his campaign staff, his wife and three sons, and his opponent, Fred DuVal, who he called "a good man."

DuVal, in a concession speech at the Democrats' election night headquarters in Phoenix, also thanked his supporters, and he said he had called Ducey to offer his congratulations.

"A registration disadvantage and clearly a bad national environment were hard enough to overcome. But we were also reminded that unlimited money is a powerful thing in politics — and is not a healthy thing," DuVal said.

He took a swipe at the massive amounts of outside spending -- so-called "dark money" -- used to attack him in the race from outside groups. Ducey and DuVal each spent about $2.2 million in their general election campaign, but Ducey has benefited from $7.9 million in outside spending compared with about $1 million for DuVal.

Ducey's win was not much of a surprise if you believed the pollsters. But some pundits wonder whether he will govern the same way he campaigned. During the general election campaign, he frequently mentioned the broad coalition of support he had and reiterated that in his victory speech.

Former Arizona Corporation Commission Chair Kris Mayes said she hopes Ducey will stand up to certain members of his coalition after he is inaugurated.

"The way he can become a great governor is by standing up to some of his own people," she said. "So if the first thing he did would be to stand up against Cathi Herrod and the other extreme measures that she and her group would want him to sign, then I think he could be a great governor."

Mayes said the state's best Republican governors, including Fife Symington, said "no" to some of their own supporters and crossed the aisle to work with Democrats.

Ducey, 50, helped launch Cold Stone Creamery in Arizona and built it into a well-known chain before selling the company in 2007 and getting into politics. He was elected as state treasurer in 2010 and said his experience in the private and public sectors made him the right fit to lead the state.

DuVal, 60, served as a top aide and adviser to Gov. Bruce Babbitt in the late 1970s and the 1980s, worked in President Bill Clinton's administration and was appointed by then-Gov. Janet Napolitano to the University of Arizona Board of Regents. The Tucson native also worked in private business.