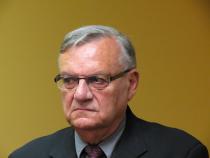 When a federal judge found former Maricopa County Sheriff Joe Arpaio guilty of criminal contempt of court last year, it was because he allowed his deputies to continue making immigration arrests after a judge said he had to stop.

Before Arpaio was sentenced, though, he was pardoned by President Donald Trump.

For the immigrants who were unlawfully detained by the Maricopa County Sheriff's Office, they have until the end of the year to apply for restitution through the county.

Journalist Jude Joffe-Block is the co-author of a piece about this, and she spoke directly with one of the victims. That story was published today by the Arizona Center for Investigative Reporting.