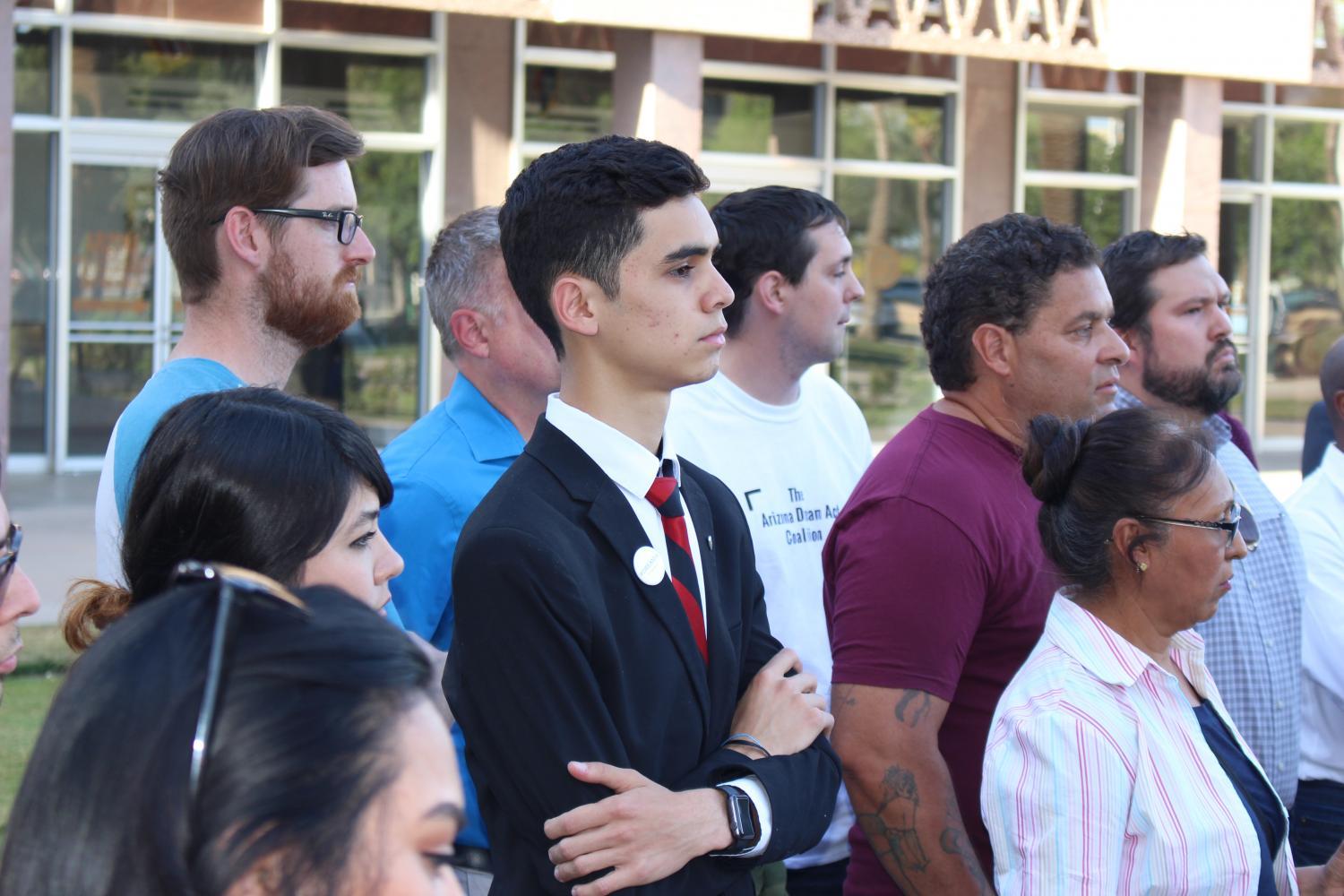 Bret Jaspers/KJZZ
Saul Rascon Salazar, a Brophy College Preparatory junior, stands with other DACA recipients at the statehouse after the Supreme Court ruled against in-state tuition for students in the DACA program.

In the hours after the Arizona Supreme Court struck down in-state tuition for Deferred Action for Childhood Arrival (DACA) recipients, students gathered at the state Capitol.

Saul Rascon Salazar is a recipient of DACA and a junior at Brophy College Preparatory. At a somber press conference at the state Capitol on Monday, he said he’d always heard it would be harder for him to do the college thing.

“It just makes me think about how those obstacles that I was told I was gonna be faced with have now increased,” he said.

Rascon Salazar was referring to the Arizona Supreme Court’s decision to uphold a lower court ruling that barred in-state tuition for students in the DACA program. That’s the program for young people born in another country, but brought to live in the United States when they were children.

More than 2,000 current college students in Arizona are in this category and currently receive in-state tuition. This will end for classes going forward.

“I’m disappointed. I would have preferred, obviously, a better outcome," said Bill Ridenour, chairman of the Arizona Board of Regents.

Ridenour said Arizona State University, the University of Arizona and Northern Arizona University had prepared for an “adverse” ruling, and will be able to connect students to private scholarship money, at least for the fall semester. Those schools also have a special tuition rate for graduates of Arizona high schools, which is 150 percent of in-state tuition.

Both the Board of Regents and the Maricopa County Community College District, which party in the case, said they will comply with the court ruling.

"We are currently reviewing the Court ruling with outside counsel to ensure the District is taking the appropriate steps to promptly comply with the Court’s decision. We are also working to determine the impact this will have on our students with respect to the timeline of implementation. This ruling is troubling for the 2,000 DACA students currently enrolled in Maricopa Community Colleges. During the past five years, more than 600 DACA students earned an associate’s degree or a certificate from one of our colleges and are making valuable contributions to the health of our economy."

Saul Rascon Salazar, alongside his activism, will continue his college visits and prepping for the SATs.

“I’m going to continue with my regular college process application knowing that I have this in the back of my mind to deal with,” he said.