How Microchipping Saguaro Cacti Helps Protect Them From Theft 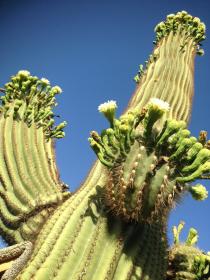 Saguaros are one of the symbols of Arizona. The majestic cacti stand tall in our landscape, but in Saguaro National Park, they are being stolen.

“We know that we have a problem with cactus theft. We know that it’s not a widespread problem, that it’s just an occasional problem, but we do know that it’s a problem,” said Ray O’Neil, head ranger at Saguaro National Park. “We believe that it’s especially a problem along our boundary roads and one of the special things about Saguaro National Park is that we abut the city in a number of different areas, and we know that we, on occasion, find places where it appears that small to medium sized saguaro cactus have been stolen from the park, we assume for landscaping and certainly even small to moderate sized cactus have a lot of value.”

And by a lot of value, he means you can sell a saguaro for approximately $100 a foot — and that’s why people are stealing them.

So, the rangers at Saguaro National Park have come up with a solution: they’re microchipping them.

“So we’re able to insert small chips into the cactus. We have a mechanism that inserts them into the cactus. The cactus then grows over top of the hole and the pit tags are a passive device. They don’t require a battery or anything along those lines. They’re a device that can then be read through the use of a specialized reader and if we read a cactus that we had planted a chip in, it gives us a number that we can then tie to a GPS location in the park so if we believe a cactus has been taken from the park it enables us to firmly say it was taken from the park and where it was taken from the park,” O'Neil said.

Now, there are about 1.9 million cactus in Saguaro National Park, and they’ve chipped about 1,000 of them. But stealing a cactus is no easy feat. Even a small saguaro is really heavy, and it involves digging a large hole.

So, the rangers have strategically placed the chips in small-to-medium cacti along their boundary roads, where they think thieves are most likely to strike.

But what does losing a thousand cacti in a national park of almost two million really do? To Ranger O’Neil, it’s all about preserving the nature and the beauty of our country’s national parks.

“It’s important to recognize that we have national parks set aside for various reasons across the country,” he said. “If you go to Grand Canyon National Park, you’re there to see the geology. If you go to Independence Hall in Philadelphia, you’re going there for the history. If you’re going to Saguaro National Park, you’re coming to see the Sonoran Desert, that’s why we’re here and the iconic species of the Sonoran Desert is the saguaro cactus, so saguaro cactus are the reason that we’re here.”