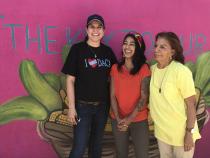 Promise Arizona is a group that promotes the power of the Latino community in Arizona. The organization teamed up with a local artist to create a mural dedicated to DREAMers. The final artwork was unveiled in south Phoenix on Sunday, April 8.

Lucinda Hinojos, also known as “La Morena,” is the artist. She said the painting depicts a young migrant girl working in a field.

Hinojos said she has friends who are uncertain about their future in the United States.

“To see them stressed and upset and nervous because they don’t know the outcome, we’re doing everything that we can to bring awareness and assist them by renewing their application,” she said. “This mural is just to bring motivation, inspiration and hope that everything is going to be okay. We have your back 100 percent and we support you.”

The event included a table for DACA recipients to get information on renewing their citizenship status.

Hinojos said she received a lot of support throughout the past two months while she was completing the project.

“When I was painting it, people were driving by cheering, honking, coming to the wall and talking to me, bringing their daughters,” Hinojos said. “It makes me proud. It’s the best feeling ever.”

Petra Falcon is the executive director for Promise Arizona. She says the mural represents more than one group of immigrants.

"This is a powerful message for DREAMers and not only, obviously the young DREAMers, but all of the immigrants because they’re basically all dreamers,” Falcon said. “Any immigrant that comes to this country dreams of a better life, free of fear and free of deportation and separation of family.”