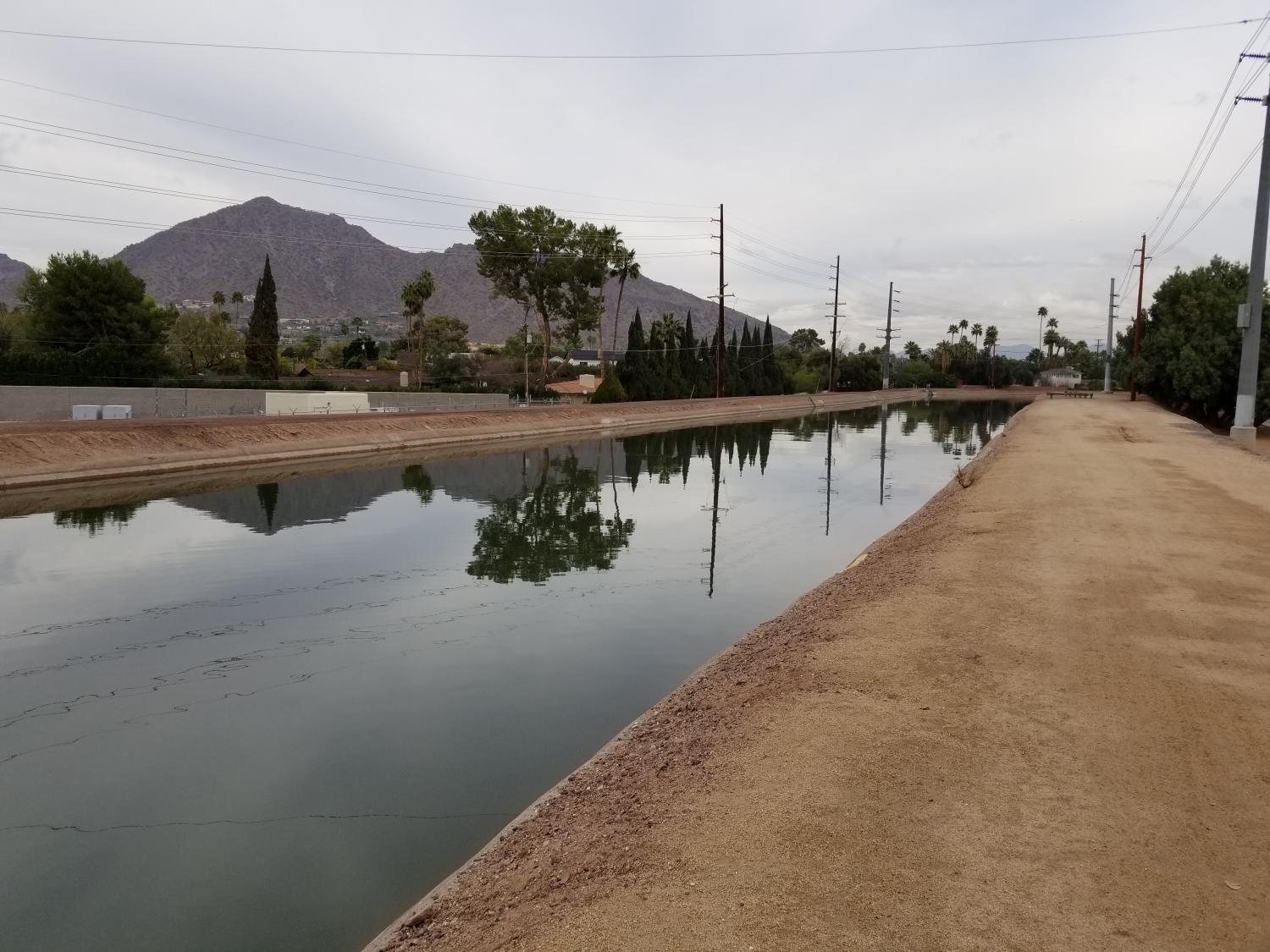 "It takes a lot of resources to dispatch individuals, their trucks, the sampling equipment, to a remote location," said Mike Ploughe, a senior scientist with SRP water quality and waste management services.

Ploughe and his colleagues see robots as one way to lessen that burden.

"If it can be done in an autonomous way, with robotics or UAVs or something, then it makes things a lot more efficient."

"[If] we can run a device through there that would go in and remove those — either scrape it off or crush the shell — and move through that pipe, then that would be a real advantage for us at this point," said Brian Moorhead, an environmental scientist with SRP's groundwater division.

So, robot-wise, SRP needs both an air force and a navy.

Assistant professor Wenlong Zhang and his team from Arizona State University's Robotics and Intelligent SystEms (RISE) Laboratory are working on the former: A quadcopter that will fly itself to assigned locations, observe and await orders from operators.

"We can actually real-time stream the video back to their station. So if they say, 'Oh, this is something. We want to take a look. How about if we collect a sample?'"

"Soft robotics is a new field of robotics that is focusing mostly on, how can you use new types of materials that are softer, more squeezy, more stretchable than traditional rigid components that we would use to make robots."

In place of costly, heavy and rigid motors or gears, the grasper's "fingers" rely on their segmented shape — and stiff or flexible areas — to curl when inflated. Engineers call such built-in behaviors mechanical programming of materials.

Once an SRP engineer — or, eventually, an onboard artificial intelligence — selects an object for sampling or retrieval, Zhang's drone will use advanced object recognition and self-piloting abilities to hover itself down to the target and get to work.

"Now the soft graspers, they will just go over the object, they will just start closing and conforming their fingers around whatever object that might be," said Polygerinos.

Zhang explained that hard robotics require exacting standards, clearly defined before a single part is cut, whereas soft robotics permit looser tolerances and let the user create as many parts as needed, cheaply.

Soft robots also better mimic nature, so ASU assistant professor Dan Aukes and his IDEAlab (Integrating Design, Engineering and Analysis) use them in the fins of their robotic fish, which SRP hopes to use in its smaller lateral pipes.

A black sensor (top) detects forces on a fish-bot as its tailfin flexes to produce thrust. The motion also creates waves that rebound, affecting the fish.
(Video by Mohammad Sharifzadeh - ASU IDEAlab)

"Fish are very good at using their fins to generate relatively high thrust at relatively low amounts of power. So we're trying to mimic that."

"If you can make something quickly, throw it in the water and get a sense of how it works, that's an end-run around the slow development process that you see in a typical research project," said Aukes.

Mohammad Sharifzadeh, a doctoral student in ASU's systems engineering program who works on the fish-bot, sees another advantage of building economically.

"The other advantage of making these robots cheap is that we don't care about if one of them dies or one of them stops working or even, because we are in open canals, if someone fishes one of them out."

Sharifzadeh said an SRP worker warned him that canal walkers might do just that.

These humble considerations overshadow the startling ambition these projects represent. Both robots require solving some of the most intricate problems in robotics — including object recognition, autonomy, navigation, flight, machine learning — for a variety of environs and missions, using minimal energy and limited computing power.

If they can crack those problems then, in terms of potential applications, the sky's the limit.

"My goal is to work on those high-level autonomy algorithms that would allow the UAV to sort of work autonomously, fly autonomously without too many human interactions," said Zhang.

Both teams share this vision, and both are considering how their robots might one day coordinate in swarms or schools — or a combination of both — to achieve larger goals.

Ploughe envisions one day blending the two projects with others as part of a larger, more comprehensive system.

"That's where a lot of innovation can be found, is bringing things together that you wouldn't otherwise try to do," he said.

Whether or not SRP funding continues to flow after contracts end this summer, there's little doubt these teams have contributed to the latest wave of robotics research — a rising tide that will lift all bots.

(Photo by Nicholas Gerbis - KJZZ)
Testing the fish-bot involves mounting it on a robot arm. Higher on the assembly, a sensor array records forces acting on the robot. 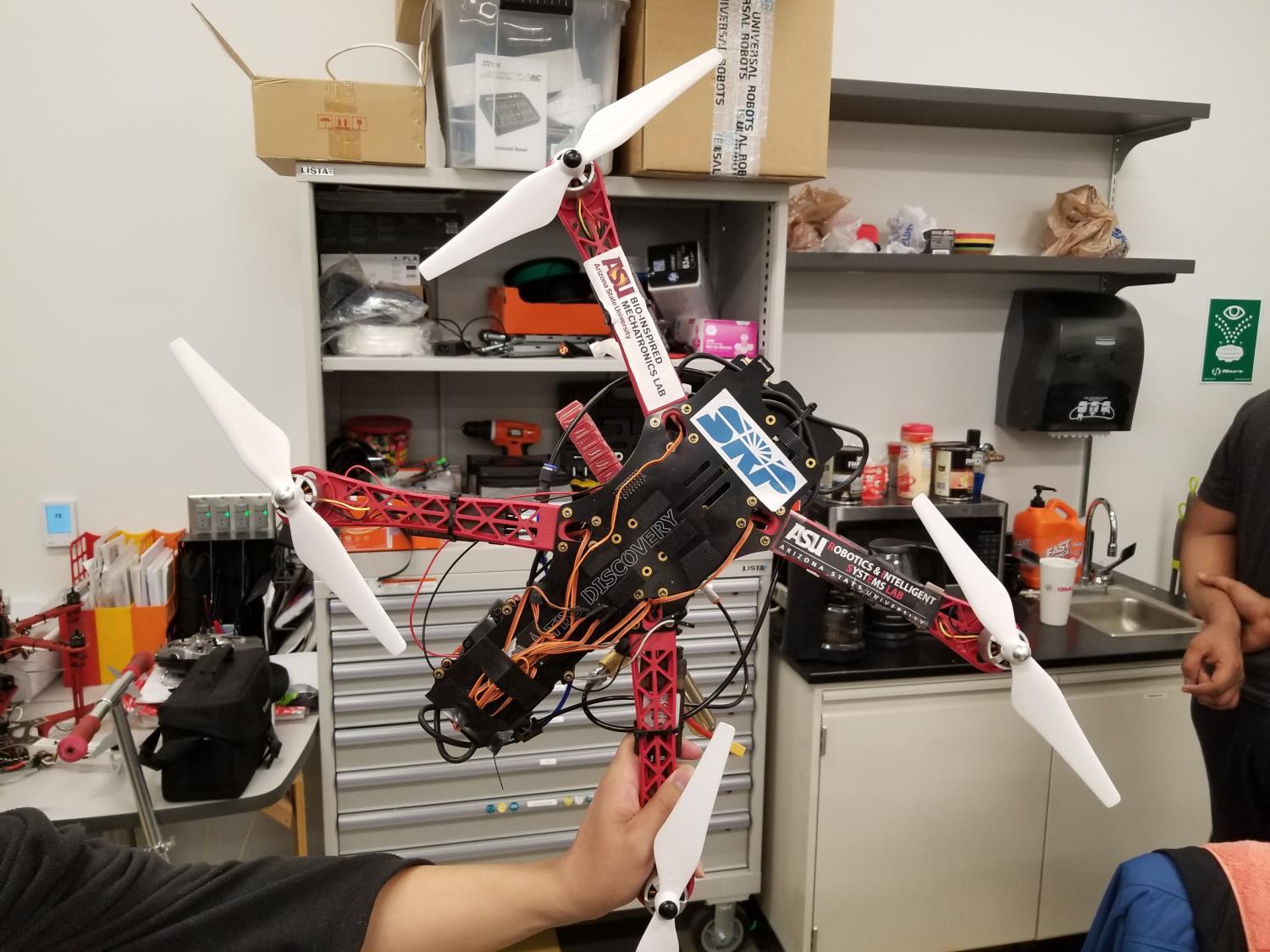 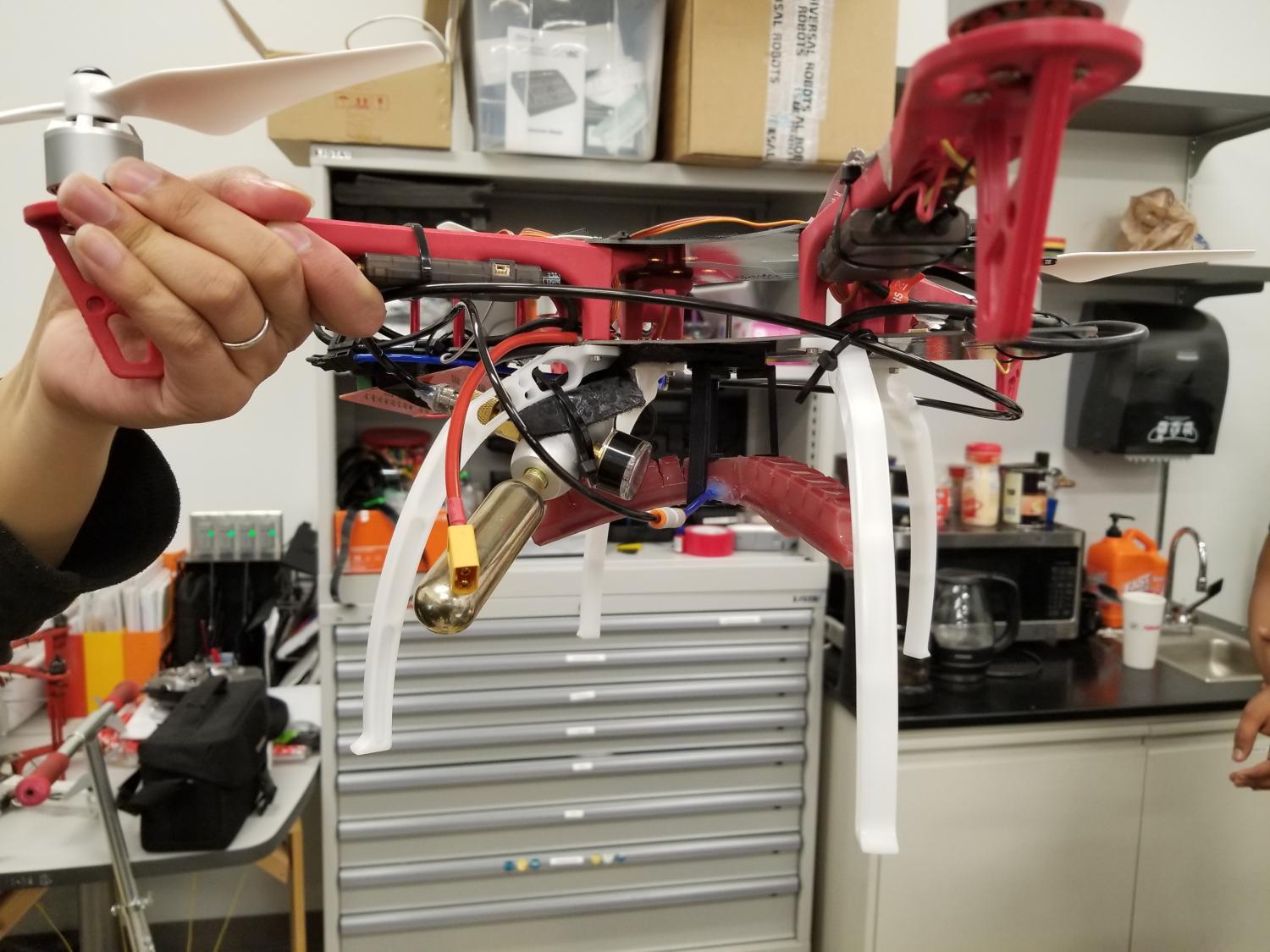 (Photo by Nicholas Gerbis - KJZZ)
Side view of the quadcopter. Two horizontal, segmented red fingers of the grasper are visible between the white legs, as is the gold CO2 canister used to actuate (inflate) them. 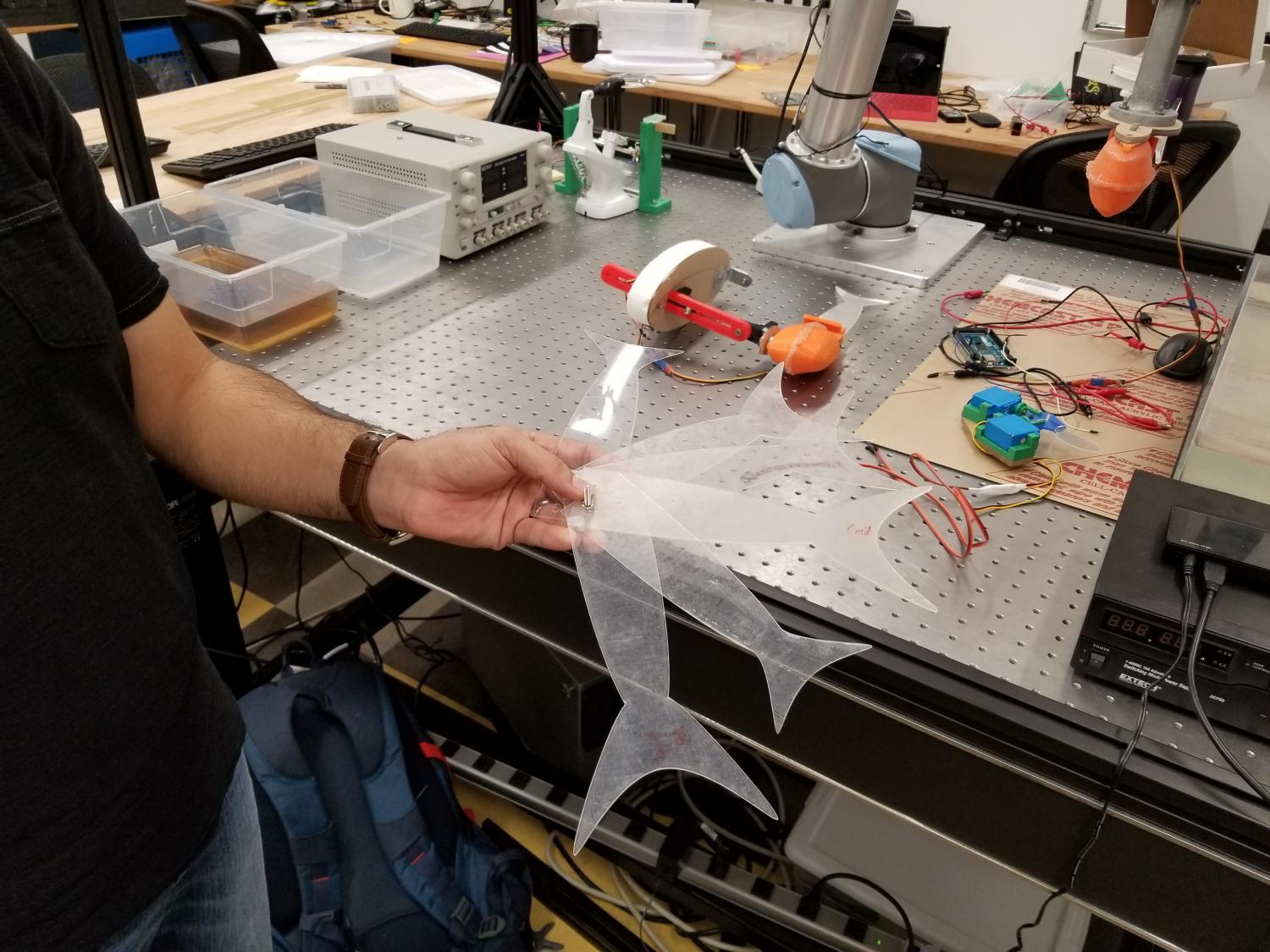 (Photo by Nicholas Gerbis - KJZZ)
Doctoral student Mohammad Sharifzadeh displays some of the many tailfin designs used in developing the fish-bot in Dan Aukes’s IDEAlab. 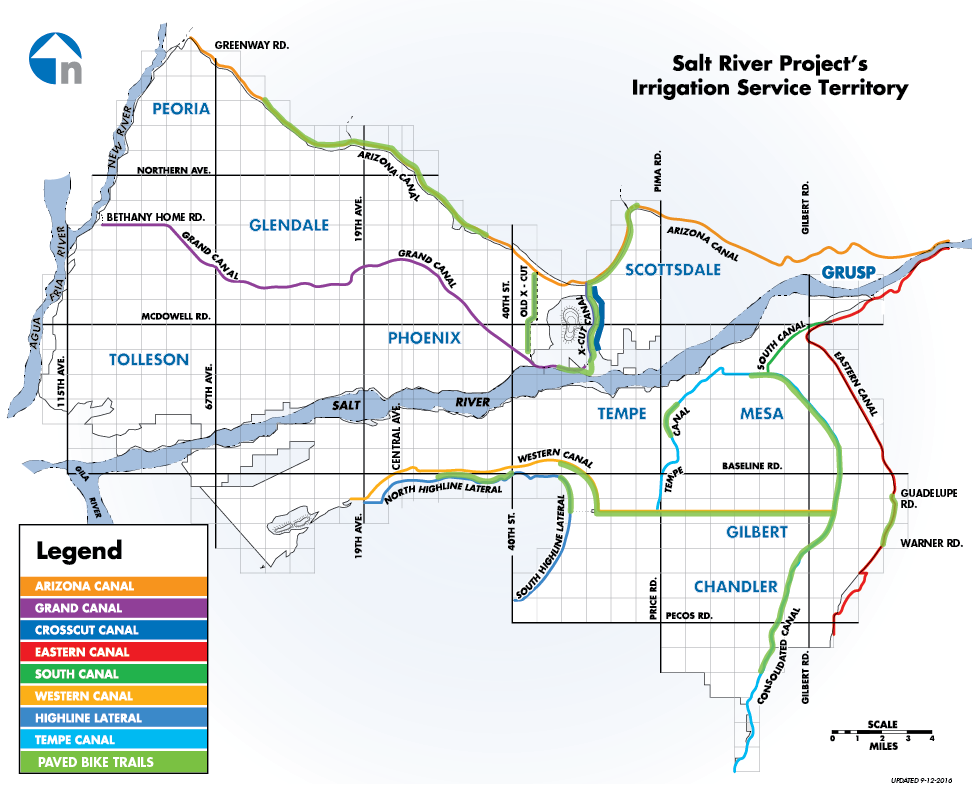