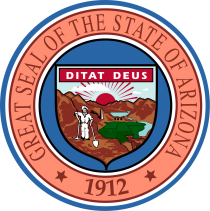 Arizona House Democrats lost their debate on Tuesday to keep the word "God" out of public school classrooms.

The words "Ditat Deus" are plainly printed on every Arizona state seal in public classrooms around the state.

A Republican-sponsored bill at the Capitol would allow the Latin term's translation, "God enriches," to hang in the same classrooms.

Democratic representative Athena Salman warned her religious colleagues, "This bill walks down a dangerous pathway of then having a religious interpretation and that puts our schools at risk for lawsuits."

"I used to be Christian," he said, "until I came to the realization of how oppressive the mindset can be. I'm not going to say all of it is. But it has substantiated and justified slavery... and justified acts of genocide."

"My Democrat friends, I know you believe in God and I know you trust God," he said, then assumed, "why you would vote to take that out of the state motto is beyond belief."

Democrats corrected that assumption and said they have no problem protecting the words "Ditat Deus," as it was written in the state constitution. It's the religious translation they warned will face legal challenges.

House members went on to approve the bill 33-to-23, clearing the way to Gov. Doug Ducey's desk.

EDITOR'S NOTE: This story has been updated to correct the fact the state motto is not on the Arizona's official state flag.