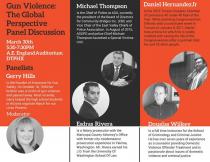 Many Valley residents honored their respective religious faiths over the holiday weekend.

But for a group of about 50 concerned citizens, their weekend began with a panel discussion on Friday evening that was devoted to discussing gun violence.

Gerry Hills, moderator and founder of Arizonans for Gun Safety fielded questions written on index cards from attendees. “As a former school resource officer," she asked panelist Michael Thompson, ASU Police Chief, "How do you feel about no-gun zones?”

Thompson replied, “These perpetrators are not choosing soft targets for the fact that ‘ok, I’m going to go here, because I know they can’t carry weapons over here.’”

He said a perfect example to illustrate his point was the Charleston, South Carolina shooter Dylan Roof who attended Bible study at a church that did not forbid carrying firearms.

Panelists also fielded questions about the use of firearms in domestic violence cases.

He said when guns are present in a domestic violence situation, lethality increases by five percent.