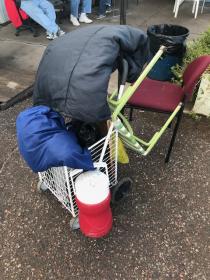 Volunteers and officials in Glendale counted 165 unsheltered homeless people in its annual Point-in-Time street count. Last year, it was 57.

The count took place in communities across the nation on Jan. 23. Glendale’s count started at 6:30 a.m. and ended at noon.

Stephanie Small, Glendale’s director of community services, spoke before Glendale City Council this week. She said yes, it was a big jump — but not necessarily because there are more people affected by homelessness.

“We really think [we’ve] done a better job of counting the people that have been there all along,” she said, and added that other West Valley cities also did more thorough counts. “Preliminarily, we probably have the largest actual count in the West Valley for this year’s numbers, but I also think it’s important to let you know that the other West Valley cities have also seen an increase.”

Homelessness is up nationally. The federal budget passed this month included increased funding to some programs, although Small told City Council it was too soon to tell how much of that money they’d get.