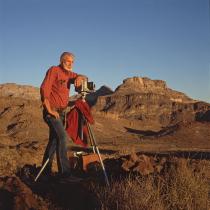 Only twice in Arizona Highways’ more than 100-year history has an entire issue of the magazine been dedicated to one person.

This month’s edition is one of them. It’s dedicated to long-time contributing photographer Jerry Jacka.

Jacka was a part of the Arizona Highways family for the better part of seven decades. His first photograph for the magazine was published in July 1958.

When he found out they were planning to make this edition dedicated to him, he called up Arizona Highways editor Robert Stieve…

"And he said something like, 'Boy, you must be pretty desperate for content down there,'" Stieve said. "And that really summarizes kind of who Jerry Jacka was, because for all of his success, as a photographer, a musician — he was kind of a Renaissance man — but for all the wonderful things that he did, he was one of the most humble people you would ever meet."

But, about halfway through the making of this edition, Jacka passed away at the age of 83.

The Show's Lauren Gilger sat down with Stieve recently to talk more about the issue and Jacka’s life growing up in Arizona and documenting it for decades.