Anything Goes At Phoenix's Mutant Piñata Show During Art Detour

Download mp3 (6.6 MB)
(Photo by Stina Sieg - KJZZ)
Every year, the Mutant Piñata Show has about 100 entries. Here are a few from teenagers. By the time the show opens, every piece will have its own, special spot in the gallery, which will transform into a colorful, community-created crazy quilt.

When we’re little kids, we’re celebrated artists. Our drawings decorate the fridge at home and hang on the wall at school. But for most of us, the older we get, the less opportunity there is to make art — let alone have it appreciated by others.

For the last decade, the Mutant Piñata Show has been trying to change that. Its parameters are simple: Make a piñata. Drop it off.

Every year, about 100 people do. And all their work is shown during Phoenix's annual Art Detour event in the downtown area.

On a recent afternoon a few weeks before the show, a small group of folks worked away on their masterpieces on a Grand Avenue sidewalk. A teenage girl kept adding cute details to a chicken with feathers made from red tickets and a beak cut from a La Croix box. A little boy proudly glopped paint on a green sphere that was supposed to be an alien.

Just like the piñata show, the annual get-together is free, open to everyone, and devoid of rules. Cindy Krogh, a regular, said all kinds of people take part.

“From toddlers making things,” she said, “I’ve seen people who are probably in their 80s, 90s come down here and just make things. No one has to be an 'artist.'”

Krogh said she’s not, and in her everyday life has a serious, delicate job training people in the hospice field. But, one day a year, she gets to rifle through boxes of yarn, retired baby dolls and finger paints, and let all the random material guide her piñata process.

This time, she crafted a red ball, with yellow googly eyes and orange feathers shaped into a rooster-like tail — a “rabbit-bird,” Krogh called it.

“I think sometimes adults forget how to play,” she said, “and this is playing.” 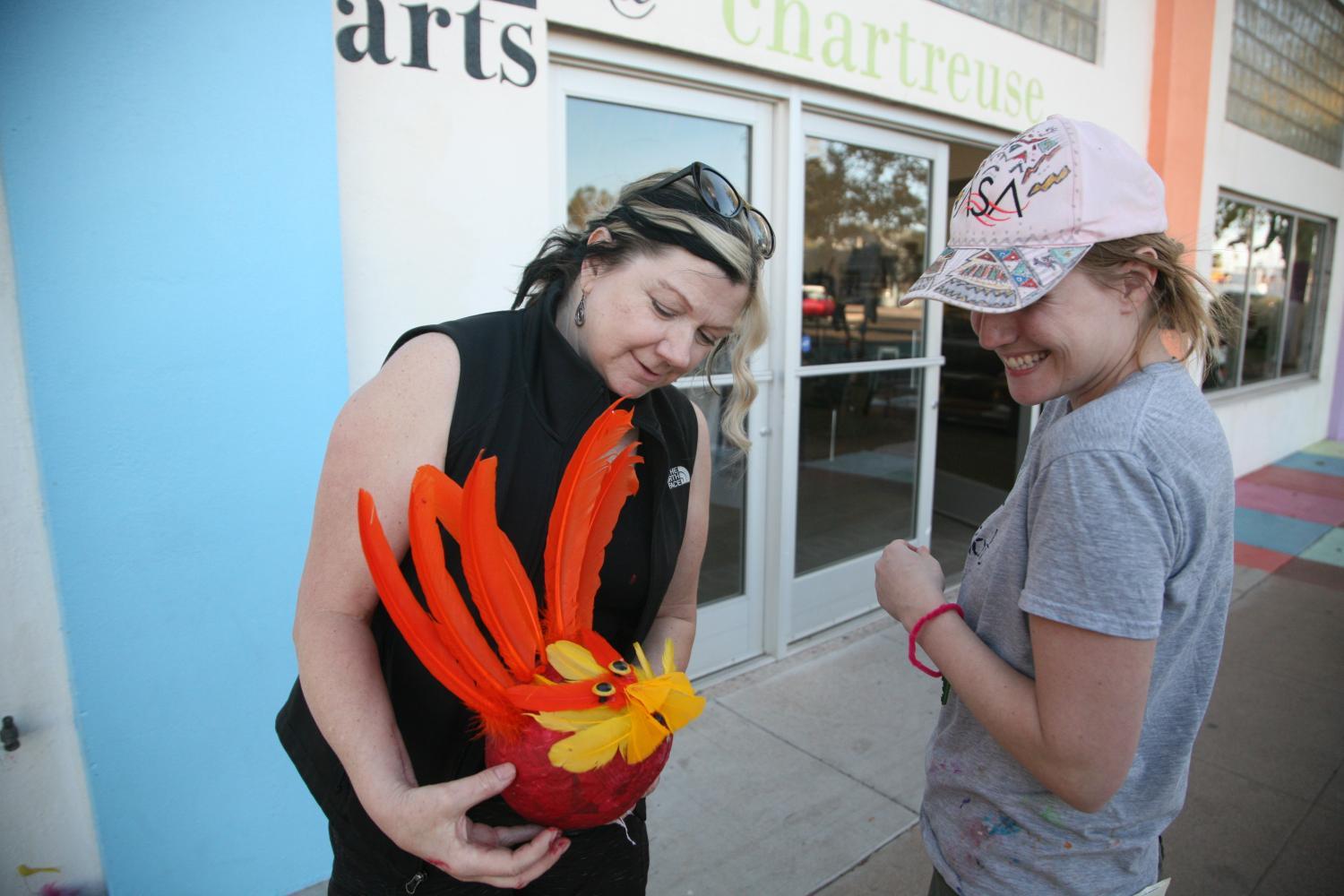 It’s that way for many professional artists in the show, too. If you’ve been in the last few years, you’ve definitely seen Andy Gordon’s big, breath-taking, bug-like pieces.

And you would never know he had to teach himself how to work in paper-mache in order to create them.

In his spacious, barn-like studio, he gave demonstration, mixing up a thin slurry for dipping strips of newspaper.

“The secret ingredient? We call it flour,” he joked.

A few curling, geometric shapes were starting to come to life on his work table, but Gordon was still unsure of what he was making. All he knew was that, in the end, it would likely take him hundreds of painstaking hours to complete.

He thinks it’s fun that it will likely get hung next to a quick, unselfconscious piece made by a child.

“Some have something to say in a big way, and some have just small things to say, but are just as intricate and say just as big of a statement.”
— Julia Ludders

The same goes for his girlfriend, Julia Ludders, who described the show like a wonderland, with an explosion of piñatas perched on tables, sitting on the floor and floating at different heights.

“Some have something to say in a big way, and some have just small things to say, but are just as intricate and say just as big of a statement,” she said. “It’s really — I love that show.”

One of the joys of the Mutant Piñata Show is seeing people react to it, while it was still taking shape at its home in a studio space off Grand Avenue.

A Valley art teacher, there to drop off her students’ work, gasped with delight at a toothy, crocodile-like creature with eyes in the back of its throat.

“Oh! Beetlejuice!” she said, with a surprised smile.

It was hanging next to a mermaid — in an intimate embrace with an octopus. Show founder Beatrice Moore was still looking for just the right spot to place the evil bunny and the seahorse-butterfly.

(Photo by Stina Sieg - KJZZ)
In "Forbidden Love," a mermaid (who looks to be married), embraces an octopus.

Moore said she’s always surprised by what people bring her.

And sometimes, that can be daunting, Moore admitted, especially when she’s faced with a pile of new ideas that she somehow has to fit together.

“But once you put everything in its place, and then people can walk in, and they can sort of walk around each little piñata see it as a unique, individual thing, but also as a cohesive whole, with all of them hanging together,” she said, “it just — it works every year.”

And that magic, along with a lot of paper-mache, keeps the show going.

The 11th Annual Mutant Piñata Show is at Weird Garden, 1008 N. 15th Avenue, from 6 to 10 p.m. on Friday, March 16, as well as from 11 a.m. to 5 p.m. Saturday and Sunday, March  17-18, as part of the multi-venue art celebration Art Detour. The Bergamot Institute will hold a piñata-making workshop at Weird Garden from 1 to 5 p.m. on Saturday, March 17. You find out about all the events associated with Art Detour at www.artdetour.com. The Mutant Piñata Show will also run from 6 to 10 p.m. on Friday, April 7, as part of First Friday.