Axes are a tool, whether for chopping down a tree or for splitting wood. Here’s a new use: throwing them at a target.

Think of it like darts. But the darts are axes.

You won’t find it at a dive bar, in the corner behind the pool table. And there are definitely a few extra safety precautions involved.

“After you throw your axe, keep an eye on it. If it’s coming in your direction, simply step out of the way. Don’t try to be a hero, catch it out of midair, anything like that,” Francesco DiNardo advised.

Here at LumberjAXEs — and yes, that’s a portmanteau of lumberjack and axes — the lanes are set up a little like batting cages with a wooden target at the end.

“We start everybody off and highly recommend you throw with two hands, at least to start,” DiNardo said.

Francesco works at the newly opened location; the first in the Valley. He’s explaining the rules to a group of six guys. None of them have done this before.

“Definitely not a professional axe thrower at all,” Jojo Kamson said.

They’re here with their other coworkers for a team building event that involves some friendly competition.

But before any of them can have bragging rights in a round robin tournament, there’s a helpful practice round ... during which a lot of axes miss the mark and fall to the floor.

As the tournament starts, it’s time to think about strategy.

“Started off a little rough. There’s a little skillset to it, you gotta watch your speed, watch your hand throwing,” Kamson said.

His coworker, Chris Maronek, is also getting into the swing of things.

“You want to throw it as hard as you can, but it doesn’t work out that way,” Maronek said. “You got to just kind of finesse it in there, so it’s not as aggressive as you’d think it would be. I guess it’s kind of like curling on TV, you know, just very gentle.” 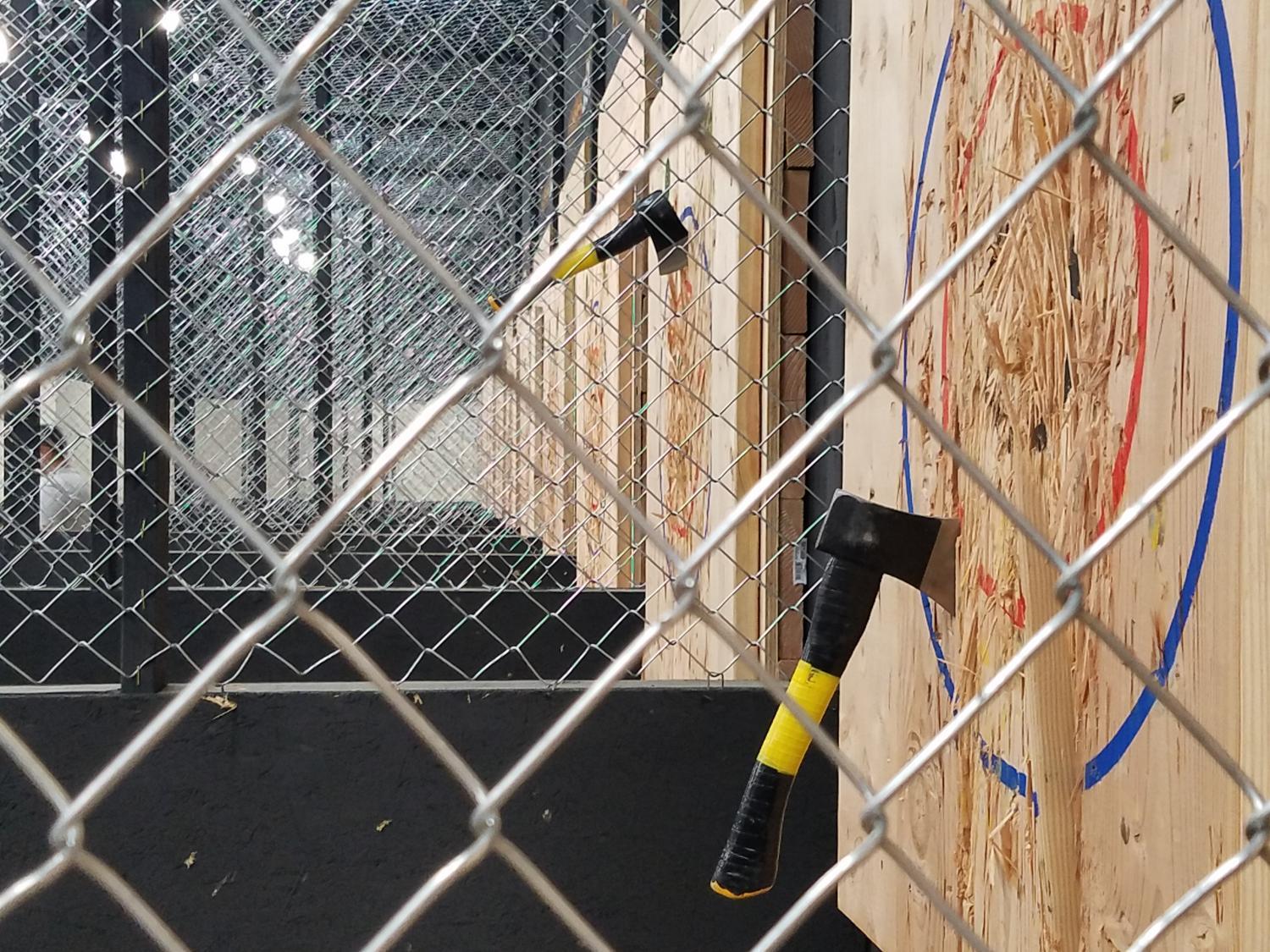 (Photo by Annika Cline - KJZZ)
The axe has to rotate just right to stick in the wooden target.

The sharp axe blade couldn’t be further from a smooth curling stone. But Chris has a point about finesse. The axe has to rotate just right, for the blade to actually stick in the wood.

Just partway through the tournament, the group’s skills are sharpening.

“That is the beauty of this sport,” said Corey Deasy, co-owner of LumberjAXEs.

“When you get an axe to stick …” he paused to chuckle. “It’s an extremely satisfying feeling to get sharp metal to stick in wood.”

Corey believes that almost anyone is cut out for this activity, and he thinks it’ll take hold as a bona fide sport in the U.S. as it already is in Canada.

“And people call me crazy, but I wouldn’t be shocked if this makes it into the Olympics in a few years,” Deasy said.

For now, it’s all about besting your buddies. 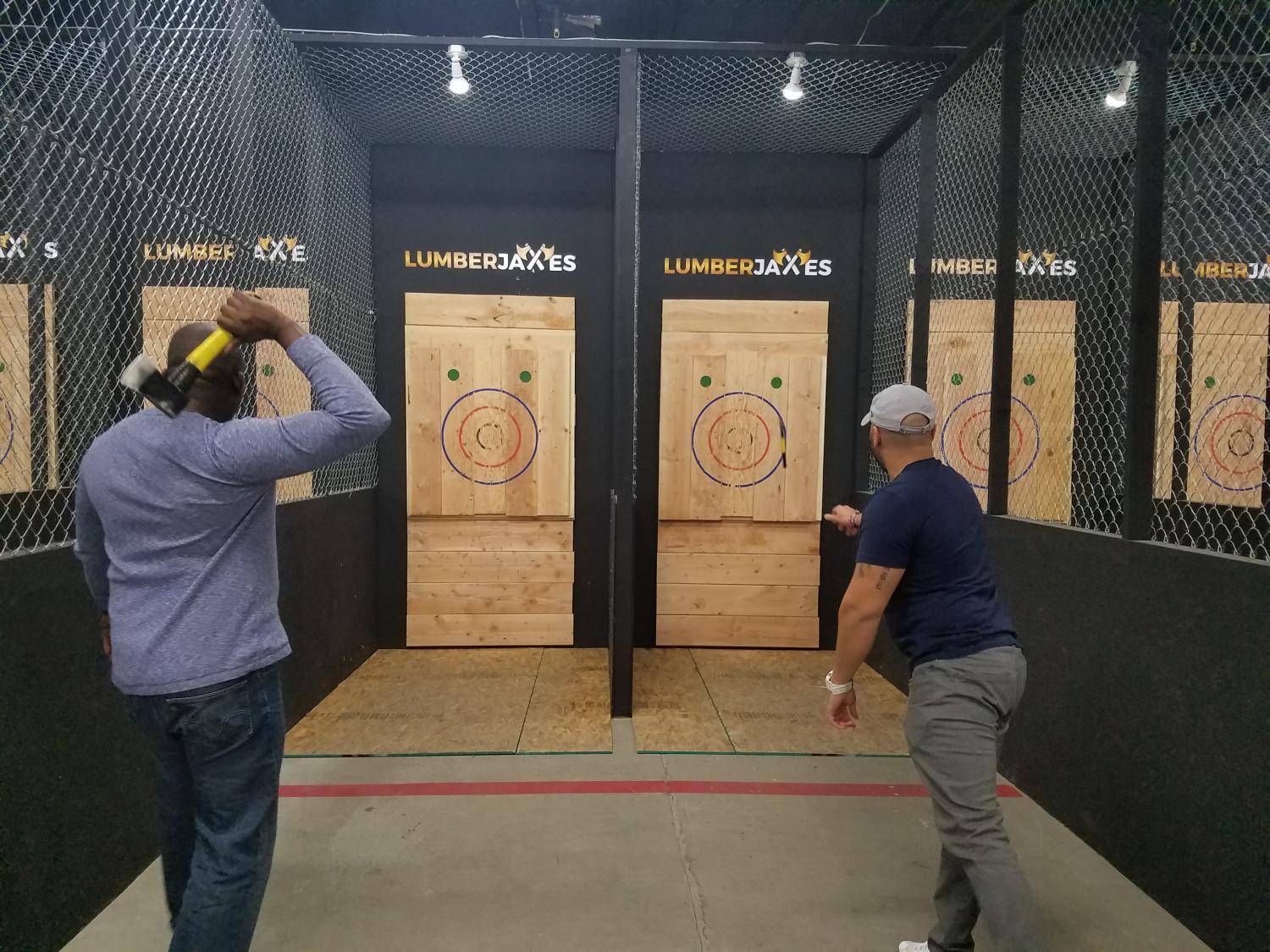 (Photo by Annika Cline - KJZZ)
A couple people practice throwing axes at the targets.
The Show