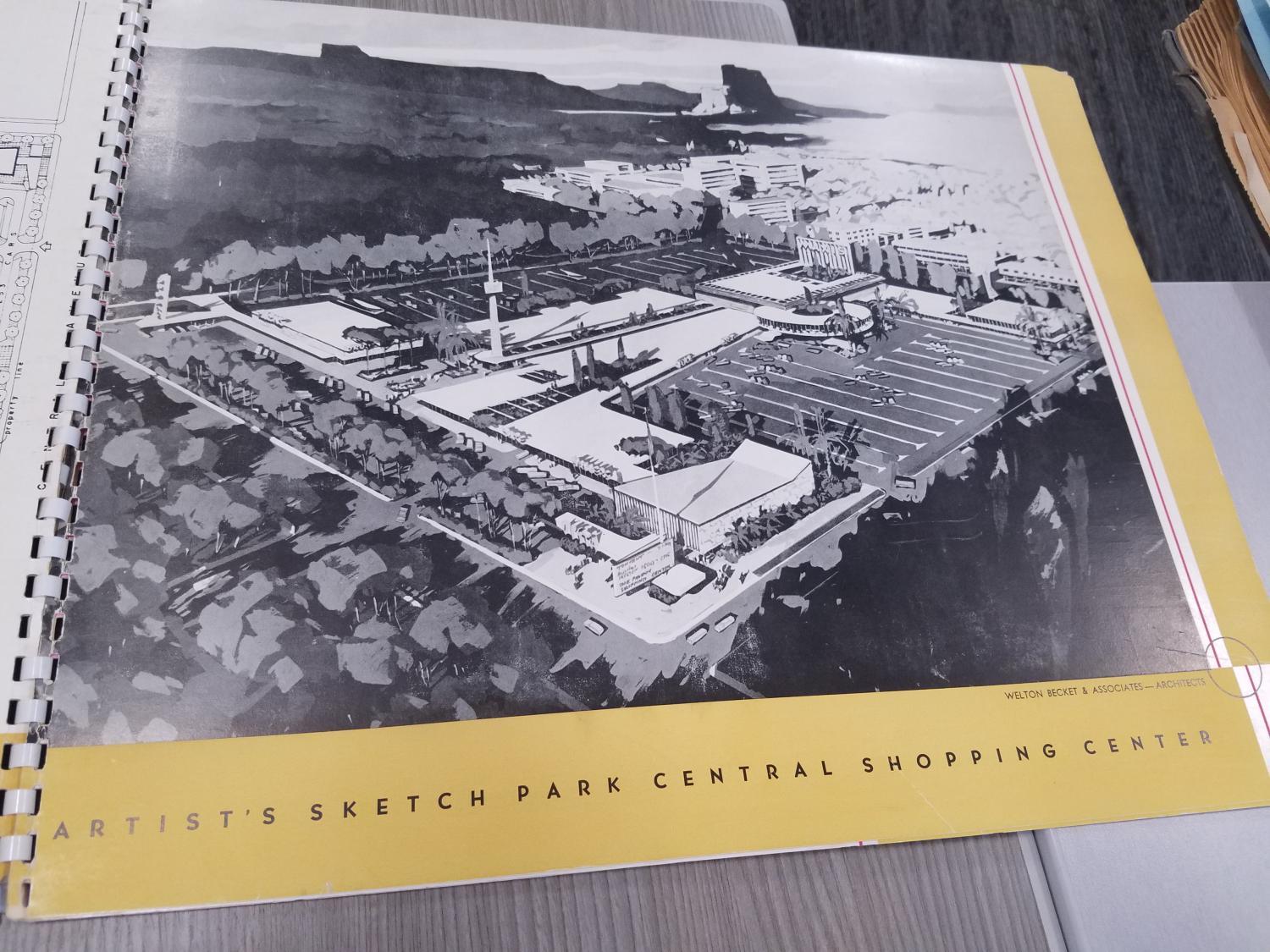 (Photo by Annika Cline - KJZZ)
An artist's sketch of the mall is in a brochure enticing retailers to choose to do business there.

You know when you go to visit a relative, and they start pulling out the old photo albums?

Well, if Park Central Mall were a person, it would be going through that same thing right now. When the current owners of the property peered into the mall’s basement, they found a bunch of photo albums and other items, all about this mall.

From “baby” Park Central, to “teenage” Park Central, it was like a ready-made museum collection spanning decades of the mall’s existence. The developers passed it on to ASU historians, who are combing through it now.

“When we flip through these different scrapbooks, it’s really like a time capsule,” said ASU history professor Matt Delmont, as he looked through just a few of 20 scrapbooks that have barely been touched in decades.

The pages are filled with clippings about Park Central Mall — a new store opening, a family-friendly event.

“Usually people don’t think about the history of the mall being something you would hold onto, so I think we’re lucky it was sort of stashed away and forgotten in the basement,” Delmont said. “So now we have a chance to go through it and try to understand this moment in Phoenix’s history.”

It’s a moment that began in 1957, when Park Central Mall was boldly opened north of downtown Phoenix, on farmland. Phoenicians today know the area as Midtown.

“And people were actually worried when they considered the mall, would people go that far north to go shopping?” Delmont said.

They did. Goldwater’s and Diamond’s department stores migrated from downtown Phoenix to become the mall’s anchors.

And in between the stores was a space where it seemed like anything could happen. Delmont pointed to an image from the '60s.

“There’s a U.S. Air Force fighter jet parked directly outside of Park Central Mall. This is the height of the cold war, where the U.S. is competing against Soviet Russia,” he said. “They have both a Titan missile and an Air Force jet outside of the mall!”

Because why not marvel at the military’s prowess before you buy a new handbag?

There were all kinds of sensational events like this to draw people to the outdoor mall. The newspaper ads hype up a giant balloon parade, jetpack demos, hula hoop competitions, baby chicks riding a tiny Ferris wheel, a diver jumping into flaming water and an annual pigeon race.

“I can only imagine that they had a series of racing pigeons flying around the parking lot,” Delmont said. “The prize was a ‘his’ and ‘hers’ set of matched Volkswagens. Which is a pretty good prize.”

The historians quickly realized how many Phoenicians had passed through this mall at one point or another. They decided to go beyond the scrapbooks and see what else they could learn from the people who lived this history.

“Really there was no place else that had all this in it, in one spot, you know?” Erma Jepsen said. 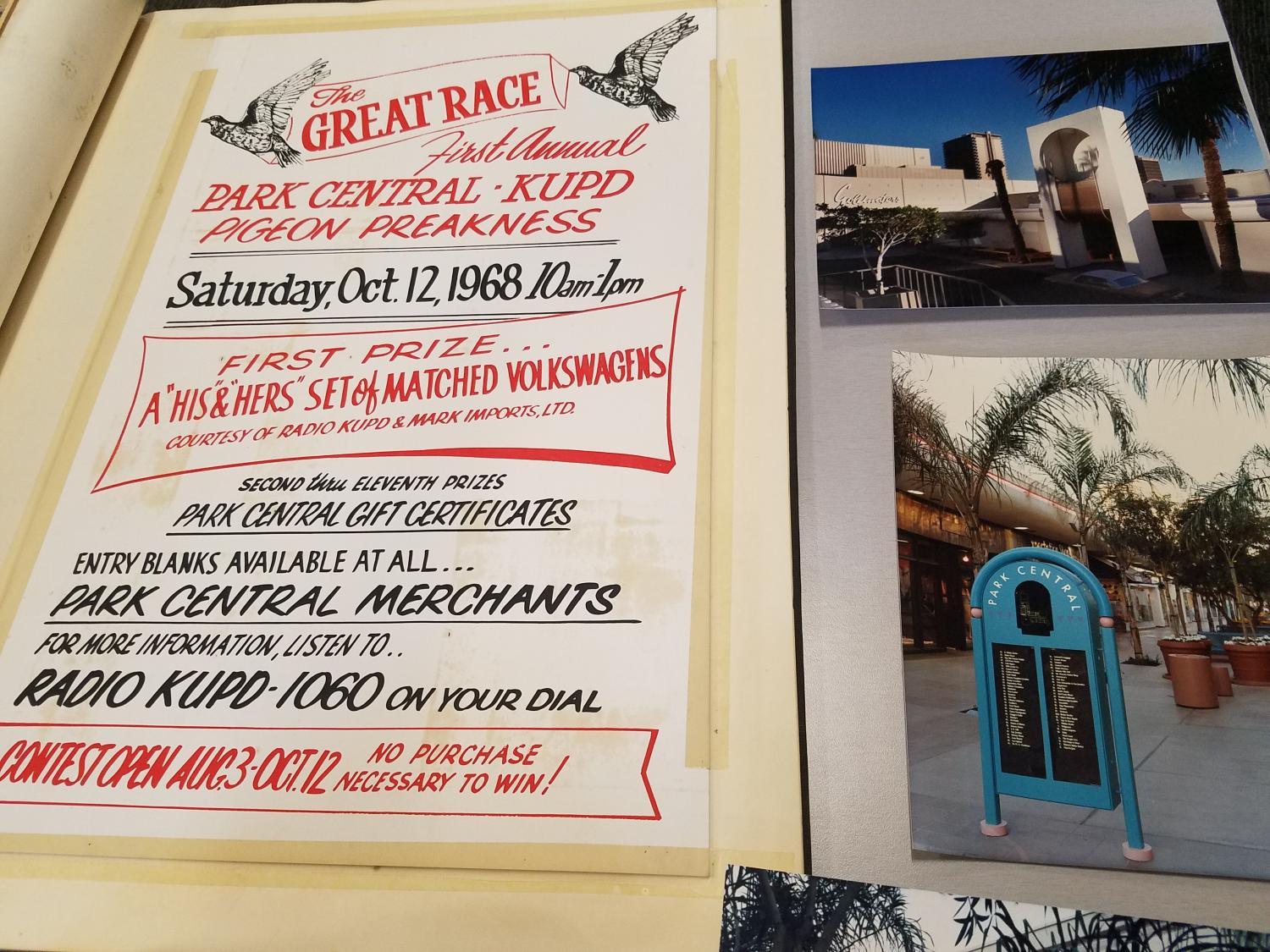 Jepsen was a shopper at Park Central from the time it opened. More than 50 years later, we’re sitting in the mall’s lower level. She just finished recording her memories for the oral history part of the ASU project.

“My mother, my sister and I used to come here and shop a lot,” Jepsen said. “It was an all day thing. We came, when we shopped, and we had dinner there, or lunch there. And sometimes they had fashion shows.”

Jepsen remembers how her husband would tease her for ordering the liver and onions at a restaurant called The Geronimo Room. And when she was a teacher, she brought her students here on field trips.

“And I had my kids line up and talk to Santa Claus. He was usually sitting on a throne right in the middle of Park Central,” Jepsen said.

She said some of those kids had probably never been to a mall before, and they took in every detail with wide eyes.

These small anecdotes are treasured by Matt Delmont and the other historians.

“It’s really a story of everyday history,” Delmont said. “And I think that’s what’s so valuable about it, is that it’s very hard to get a sense of how did people dress? What did they drink, what did they wear, where’d they shop? Where did Phoenicians spend their time?”

By the mid-1960s, the answer to that last question became more varied. Park Central Mall had competitors, and they had air conditioning. Still, the mall kept up appearances.

“We kept the floors clean. We kept the ashtrays clean; strained them with a wire strainer,” said Mike Larson.

It was one of Larson’s first jobs in high school, a step up from paper boy. He worked here in the early 1970s with some of his classmates. 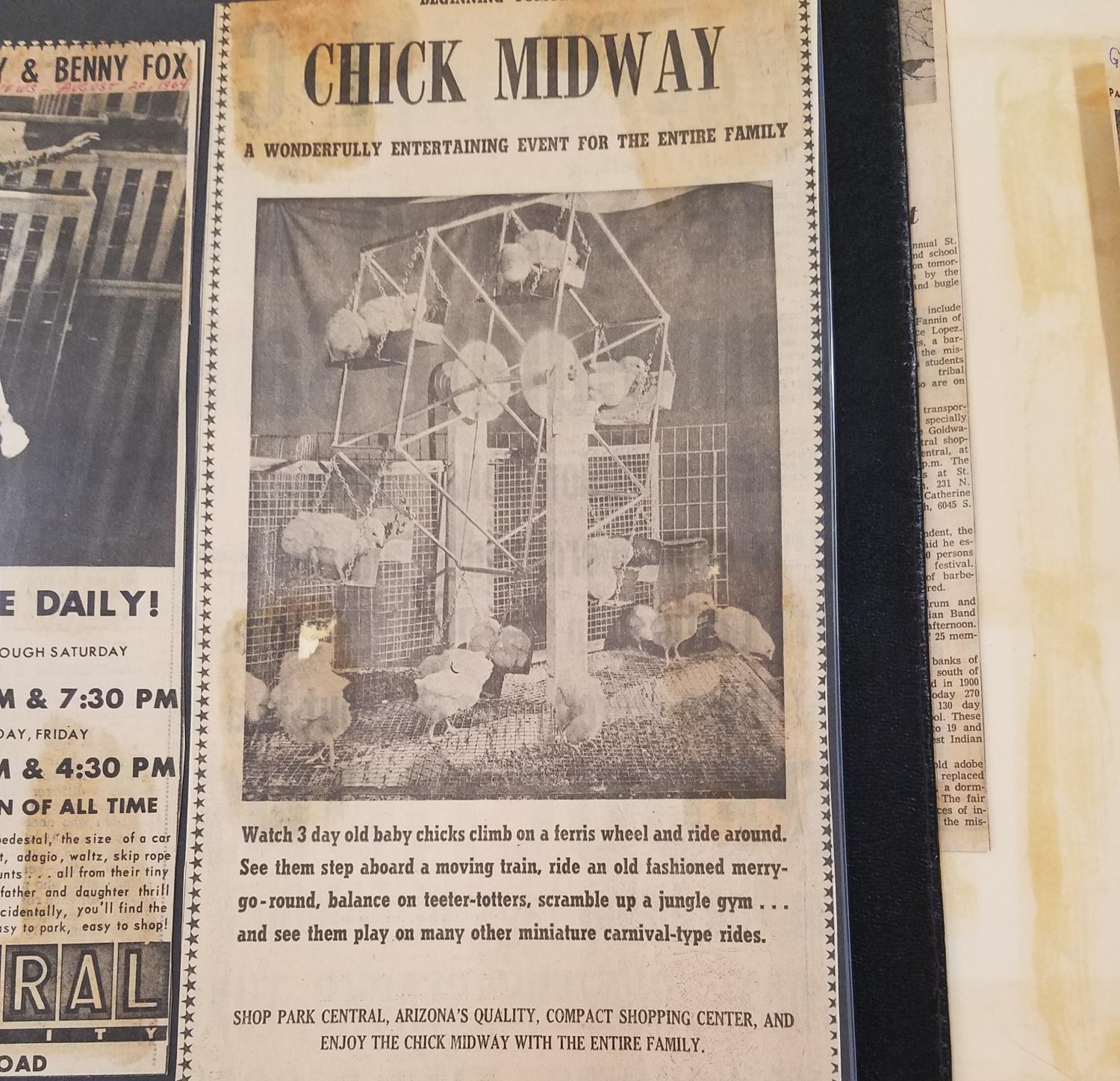 “Lot of good memories,” Larson said. “We did the sign changing, you know, sometimes we’d misspell something. Even though it was given to us on paper, we’d get the call saying hey, you got that letter wrong and we said, 'OK,' and we’d go fix it.”

The marquee signs have changed countless times since that gig, and the mall stopped being much of a mall in the 90s. But just being back here within these walls has Larson reeling memories in like fish on a line.

“When we’d all have to come shop with mom, dad would go into Smuggler’s Inn, and that’s where he would spend his time while we shopped,” Larson said.

Today, a few businesses and a temporary branch of the city library are open during construction. Most of the time the parking lot is just a parking lot.

But the current owner has big plans to turn the location into something that speaks to this decade — a tech workspace, with community gathering areas and art galleries. It’s expected to be completed late this year.

Erma Jepsen is glad to see the building and its past are being preserved.

“I think you just need to know history a little bit,” she said. It wasn’t one of my favorite subjects in school, because I didn’t care about all that old stuff either when I was young. But now I learn to appreciate this old stuff.

She points at herself when she says this, and smiles.

There will be another oral history collection at Park Central on April 7. And the historians plan to show the public the stories this spring.

It’ll be another event for the Park Central history books.