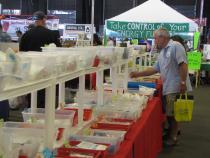 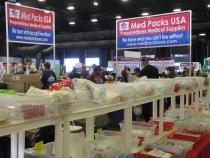 Being prepared for a large-scale disaster is not a new notion. In the days of the Cold War, many Americans built bomb shelters stocked with food to protect their families from potential nuclear fallout.

While the threat of nuclear war may have diminished, the “prepper” culture remains. But the Arizona Prepperfest, held this weekend in Scottsdale, was a showcase for a new kind of “prepper” mentality.

Tony Tangalos is the promoter for the Arizona Prepperfest. He says while television and popular culture have come to portray preppers as conspiracy theorists waiting for the sky to fall, the movement is actually much more down to earth.

That’s not to say you couldn’t find vendors with supplies for those who are worried about the apocalypse. There were plenty of booths selling things like emergency medical supplies, military-grade body armor and even freeze-dried food to stock your bunker.

There were also a few groups in attendance with a decidedly greater sense of urgency.

Ernie Engle is a member of the Arizona Rifles Tactical Survivalists. He was recruiting members for his group, which will leave the city and go to remote sites around Phoenix when he says things inevitably go south.

“You see the ISIS situation, you see the Ebola Situation, you’ve got multiple prisons in the Valley,” Engle said. “What do you think is going to happen when those prisoners are released – because there’s nobody there to keep them in.”

But not everyone in attendance was focusing so much on fear. A majority of the booths and programs centered green living and home energy conservation.

Peter Bigfoot is a prepper who takes pride in his self-reliance. He says retailers used to laugh at him when he went to purchase shoes for his larger-than-average feet.

“I said ‘well if you can make shoes I can make shoes,’” Bigfoot said. “And I just kinda went out in the desert and sat on a rock till I figured it out and made myself a pair of shoes. And they fit. And they were comfortable.”

He still makes his own shoes, practices herbal medicine and organic gardening on his farm.

Skills like these, not a sense of inherent danger, are what Amber Jones brought her family to the festival to learn. She’s concerned about exposing her young children to genetically modified foods.

“There’s great ways to do gardening where the water can actually be recycled and filtered so you’re actually learning about conservation as well as growing your own fruits and veggies,” Jones said.

“It makes it possible for me to have a lot of freedom and a lot less fear in life,” Bigfoot said. “The thing is to make the best of it, where you are.”

He says he’s prepared because he lives his life healthy and happy – he’ll let the sky fall where it may.