Higher-Ed Experts Watching How GCU Nonprofit Deal Will Play Out 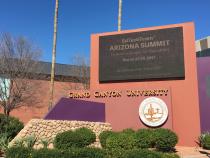 Higher-education experts across the nation are closely watching how Grand Canyon University’s change to a nonprofit plays out.

GCU officials declared the recent approval by their accreditor to become a nonprofit as a step to return the school to its historical roots.

In fact, by creating a new nonprofit school heavily supported by a separate for-profit group called Grand Canyon Education, GCU would usher in a new era for the university.

That’s according to for-profit college critic Bob Shireman, a fellow at think tank The Century Foundation.

“It’s still at least half for-profit, which means that it does not really have the elements of what a nonprofit organization is supposed to be,” he said.

It all depends on how the next steps for GCU play out. The last plan rejected by the accreditor called for CEO Brian Mueller to head both the college and company. That could happen this time too, but only if the two governing boards of GCU and GCE choose Mueller to lead both, separately.

Officials said this is similar to how a lot of nonprofit schools make agreements with private companies to be part of the school’s operations.  And that is true, but Shireman says the contract is usually for a fraction of the school’s offerings.

“What’s different about the Grand Canyon University deal is that it is a joint operating agreement for the entire university,” Shireman said.

GCU still needs a plan approved by local and federal education departments before moving forward with the nonprofit university.