Making And Innovation Find A New Home In The Valley 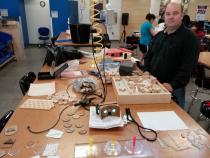 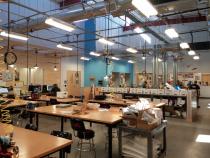 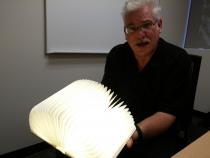 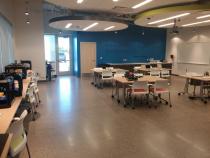 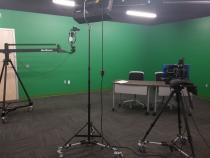 Invention and making things have long been romanticized by people outfitting their garages with tools, workbenches and parts. Either tinkering by themselves or asking a buddy over for help, some of today’s biggest companies started in the humble garage.

So I wondered, is this still happening? It is, but somewhere else. Arizona State University Professor Micah Lande said small innovation is now moving away from the garage toward a more communal use of space and tools.  He calls it the Maker Movement.

“Making is a really exciting time because there is a lot of democratization of tools," Lande said. "There’s a lot of communities and maker spaces popping up where hobbyists who might have been alone in the garage now can come together and be part of a community.”

Lande has been studying maker trends, especially between generations. He said today people are less interested in learning making as a whole and are more focused and goal oriented.

“Whether it's ‘I wanna build a fire-breathing dragon’ or ‘I wanna figure out how to have clean water in the developing world,’ they look at it as a problem first and then the actual information and knowledge that they need to address those problems secondary,” Lande said.

I went over to a collaborative maker place called TechShop in Chandler. It’s part of a small, for-profit chain. It outfits large, open buildings with tools, machines and workbenches. It also offers 3-D printers, computers with design software and, most importantly, creative people.

“I am an inventor.”  Kevin Moriarty works full time at TechShop.

“My big project right now is creating an augmented reality environment that allows students and teachers to connect with each other around the world,” Moriarty said.

It’s kind of a phone app that allows users to view a virtual world simultaneously. The former math teacher tells me he thought about starting the project at home.

“I was going to spend about $20-30,000 to convert my garage to a much worse version of TechShop with just a few wood tools, but it’s super expensive," said Moriarty. "So luckily I found this about a month before I was going to do that and I’m like ‘oh, yes!’”

Moriarty said he initially came for the tool access, but it was the people and interests that kept him there. All participants need to take a safety and operation class on each piece of equipment they want to use and “Dream Consultants” are on hand to help when needed. Mark Hatch is the CEO of TechShop. He saw a demand that wasn’t being filled in the marketplace.

“What we’re seeing now is people with a middle-class income can now actually innovate to their heart’s content," said Hatch. "And they have a lot of great ideas.”

Hatch shows me one of them. A book that opens up into a sort of japanese fan that is actually a lamp. He stresses that part of the shop’s success comes from some of its users taking advantage of an increasingly accessible marketplace for goods to be sold.

“It used to be very expensive to go to market," Hatch said. "Now it’s not. You can do eBay right away. I mean, you can set up an Etsy store for 20 cents and then fire up your social network to go in and start looking at what it is that you’re doing. And then use that as a viral mechanism to do marketing.”

TechShop has a range of makers, from old mechanics to teens, though it doesn’t carry education programs for developing young makers. But a new project in Glendale is filling that space.

The START program works with schools across the West Valley to provide hands-on time for students to design and create. Director Chris Cook explains that START also provides maker labs for community members and co-working spaces for aspiring entrepreneurs.

“We have this unique concept that blends three things, business, education and the community, in one space," said Cook. "And it’s very difficult to be able to blend these groups for a variety of reasons; logistics, time. So we’re forcing these three entities to come together.”

The START space has a complete media production studio, tools for building and spaces to share ideas. Think Google, but with tinkering in mind.

“There’s a conduit out here in the west Valley to start to tinker, to move people forward, to collaborate, to innovate as well,” Cook said.

With this increased accessibility to tools and creative minds, we may start to see residents across the Valley coming up with new innovations, but still keep their car in the garage.